Manyin putting on proper helmets on motorcyclists at the safety campaign.

KUCHING: Upgrade of public transport is one of the long-term answers to curb the rising road accident-related deaths in Sarawak.

Infrastructure Development and Communication Minister Datuk Sri Michael Manyin Anak Jawong said last year, 6,706 deaths occurred due to road accidents nationwide or an average of 18.3 persons per day. In 2014, the number of deaths was 6,674.

“For the next few years, the number of cars will increase. Every year, the number of new cars totals to 80,000 to 90,000 units in the state alone,” he said during the launch of the Safety Campaign by Public Works Department yesterday.

He said the public transport facilities in the state should be improved.

“In Sarawak, sometimes in one family, there could be up to five cars. That’s why our roads are choked with vehicles. The moment we have better public transport, more people will use it and decrease the usage of (private) vehicles in the state. As long as we don’t have good public transport, people still buy cars and motorcycles to get around.

“I urge the ministry and Putrajaya to provide the allocation for public transport in cities like Kuching, Sibu, Miri and Bintulu,” Manyin added.

He gave an example of Singapore, which had a population of 6 million people and yet owned less than 600,000 cars because they had one of the world’s best public transport.

“We in Sarawak have a population of 2.56 million but owns 1.6 million vehicles because we still have to rely on our vehicles to get to work.

“The long-term solution would be better public transport in the major towns. The next one is to have better rail network it can carry more people. It is more expensive but in the long run it’s going to solve a lot of problems. This has to be subsidised by the government,” Manyin said.

Meanwhile, the police said that Sarawak showed an increase of 6.9% of road accidents in 2015 compared with 2014. The statistics released also showed that almost 50% of road accident deaths involved motorcycles and pillion riders.

Road Safety Department Sarawak director Davina Agnes Enteli said as motorcycles were a common mode of transportation in the state, the risk of getting injured for the rider or pillion rider was the highest compared with car or lorry drivers.

The Malaysian Institute of Road Safety Research (Miros) stated that 60% of the motorcycle victims were not at fault but caused by poor visibility of other road users.

“However to reduce the risk, I urge the community to encourage motorcyclists to use safety helmets,” said Davina during her safety campaign speech.

She said most road accidents were caused by human error and it could be avoided if the drivers were more careful and abided to the speed limit.

“In conjunction with the festive season, we encourage those going back to their hometowns to use public transport. Enforcement activities and campaigns will continue. We want to stress the habit of careful driving. Road safety is a joint responsibility, it will not be a success if we take things for granted,” she said. 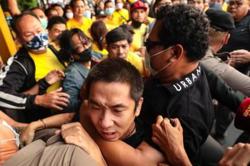