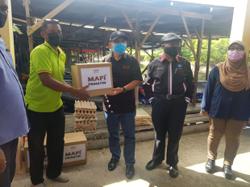 THREE long-time fishing buddies found profitable insight when they turned their passion for angling into a fish farming business.

“We became fishing partners more than 10 years ago. We are crazy about fish. When I go to the wet market, I would walk along fishmonger stalls to check out fish even when I don’t plan on buying,” said Wong.

A few years ago, however, Wong began to notice that wild fish brought in by local fishermen were getting fewer and smaller.

“Take a look at what fishermen bring back from the Straits of Malacca. Our sea is being badly over-fished,” he said.

Sensing an opportunity, Wong and his pals pooled together RM500,000 and started 60 cages.

The farmed groupers being packed for distribution at the Sungai Udang fishermen’s jetty near Nibong Tebal, south Seberang Prai.

Today, their setup comprises 144 cages, and is one of the 100-odd fish farms that pepper the surface of the sea at the left of the island-bound lane of Sultan Abdul Halim Mu’adzam Shah Bridge.

Wong said they were sending 13 tonnes of fish to the Sungai Udang fishermen jetty in Nibong Tebal each month.

“We recovered our investment with our first harvest,” he said when met at their fish farm recently.

For their own consumption, they have a couple of cages teeming with expensive giant and dragon tiger groupers with a retail value of between RM80 and RM120 per kg.

“These are not for sale. The fish is too pricey to be considered a daily food fish,” smiled Wong as he landed a 2kg dragon tiger grouper for lunch using a hand-line, running sinker and akembong fish head as bait.

Wong showing the 2kg dragon tiger grouper that he landed with a hand-line. All the groupers in their farm are bred for personal consumption. — Photos: ASRI ABDUL GHANI/The Star

For the market, Wong said they preferred to raise fish suitable as daily fare.

“It makes us happy to help reduce the country’s reliance on wild fish.

“Our farmed fishes eventually reach the Selayang wholesale market and become a part of the country’s protein supply,” he said.

Wong added that 70% of their harvest went to the Selayang market and 30%, mostly red snappers, went to Singapore to cater for the republic’s love for fish head curry.

Their venture’s success came with a lot of hard work, beginning with waking up at 5am every morning for the trio’s operating partner Teoh.

“We use fish pellets but I prefer a high percentage of trash fish because it is natural food. Trash fish are what fishermen net in by chance that aren’t good eating. But if I am late by just an hour, the trash fish will all be bought up,” Teoh said.

The trio are exploring downstream and upstream expansion plans such as fry production, feed-milling and fish filleting.

“Open-sea fish farming is a vital project to address national protein supply and we hope the government will give more support for successful ventures to expand,” Wong said.