Lim holding up a pack of the newly launched Essenso MicroGround Coffee.

A FLAVOURFUL drink can leave one utterly satisfied and this is what Super Food Marketing Sdn Bhd intends to achieve with its Essenso MicroGround Coffee.

Executive director Steven Lim said the new three-in-one coffee blend was the first of its kind in the region as it had 100% premium Arabica coffee beans.

“The Arabica beans are finely ground at a low speed in an oxygen-free and ultra-low temperature environment to preserve its essence.

“It is then blended with premium instant coffee also produced out of Arabica coffee beans to deliver the taste of a more complete coffee profile,” he said.

The coffee is said to give a richer taste, deeper aroma, fuller body, and a smooth mouth-feel.

Lim said many consumers felt three-in-one coffees had its drawbacks.

He assured Essenso is unlike most instant coffee drinks.

Confident that the product would become the next wave in the market, Lim said it had already proved itself in statistics.

“According to research by A.C. Nielsen, eight out of 10 blind-test participants prefer the taste of Essenso over other instant coffee blends, while seven out of 10 want to buy the product after having a taste.”

Lim said Essenso was created after 15 months of diligent research and development, which also took into consideration customer feedback.

To bring out the appreciation for the new beverage, the brand rolled out the “World-Stopping Taste” campaign that celebrates the feeling of “getting lost in the moment”.

“People today are leading such busy lives that they do not have a moment to just relax.

As part of the campaign, Hah said Essenso would run roadshows at cinemas and provide samples to movie buffs.

“This is so they can pause and enjoy the coffee while watching movies.”

Essenso MicroGround Coffee comes in the three-in-one and two-in-one variants, priced at RM15.90 for a 20-stick pack and RM7 for an eight-stick pack. 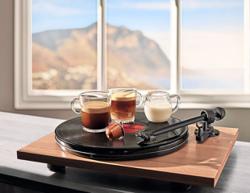