Going the extra mile for the less fortunate

MANY people sacrificed their Sunday morning to take part in the Lion Parkson Run 2015 at Setia City Mall Central Park.

With the tagline “Go the extra mile, for the extra smiles”, the Lion-Parkson Foundation (LPF) co-organised the second edition of this charity run with the Lee Chong Wei Foundation.

About 5,000 participants turned up before 7am for a brief warm up session afterwhich LPF chairman Puan Sri Chelsia Cheng expressed her gratitude to participants, sponsors and the VIPs for their support towards the event. Cheng (centre) joining other guests of honour in the 3km VIP Run category.

Cheng added that she was grateful to badminton star Datuk Lee Chong Wei for his personal interest and keen support towards the run despite being unable to join.

Lee at that time, was participating in the China Badminton Open.

Runners, who completed their race in any of the categories were awarded a Finisher’s Medal along with an electronic certificate.

Meanwhile, the top three finishers for the men’s open, men’s veteran, women’s open and women’s veteran under the 10km competitive run category were each presented with a trophy and Seiko timepiece during the prize giving ceremony.

In the women’s open, Norliana Mohd Rusni was the top finisher while Cheng Mun Yee clinched the spot in the women’s veteran. 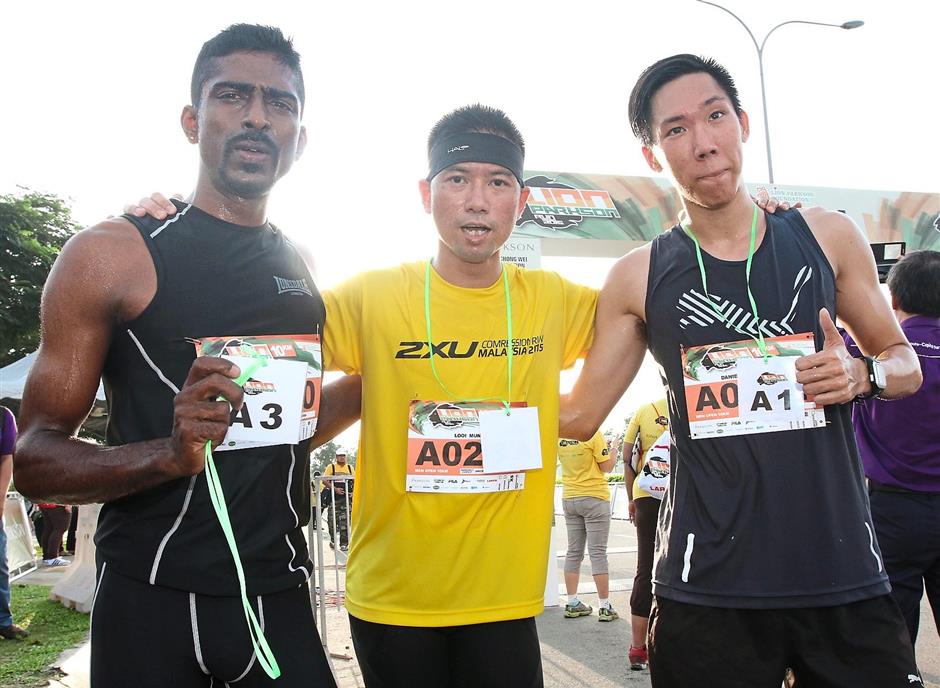 The top three finishers for the Men’ Open under the 10km Competitive Run category.

At the same time, a lucky draw containing prizes such as luggage bags, watches and bicycles was held.

Cheng said, the goal of the Lion Parkson Run 2015 was to raise funds so that additional buildings could be constructed for the Home for Handicapped & Mentally Disabled Children Association Selangor based in Banting.

The existing Phase 1 building was built at a cost of RM2.2mil contributed by the LPF and was officially opened by Lee in November 2012.

“We will require RM6mil for the construction of the upcoming Phase 2 and Phase 3 buildings.

“While Phase 1 is meant for the children, Phase 2 and Phase 3 will be built to accommodate the orphans and senior citizens respectively,” explained Cheng.

In addition, the home operators are planning to levy fees lower than the usual rates in nursing homes.

“More importantly, this event should raise awareness among the public regarding the need to care for the abused and less fortunate people in society,” she concluded.