Sultan Ahmad Shah (centre) accompanied by Sultanah Kalsom cutting the birthday cake. With them are (from left) Ch’ng, Mohamed Apandi and Abdul Azeez.

A SON’S love for his parents transcends boundaries as he dutifully makes “behind the scene” preparations to celebrate the birthday of his father.

TAT Alliance Services Sdn Bhd chairman Tengku Fahd Mua’adzam Shah could not be physically present for his father’s birthday as he was busy with his course work at the Princeton University in the US.

However, that did not stop him from taking to social media to plan a birthday bash for his beloved father who is the Sultan of Pahang Sultan Ahmad Shah.

The prince also had a hand in preparing a birthday gift – an electric car – which can fit two persons inside.

The custom-made car, bearing the number plate SAS 2015, was unveiled by the state ruler, accompanied by his consort Sultanah Kalsom, during a glittering birthday dinner at a leading hotel here to mark his 85th birthday this year. The special registration number is an acronym for Sultan Ahmad Shah. 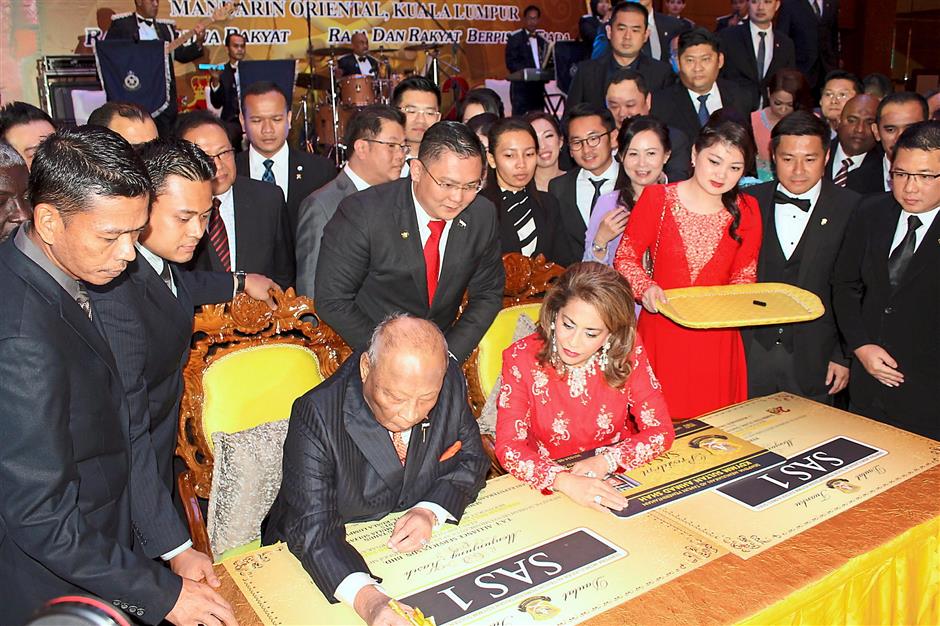 Sultan Ahmad Shah accompanied by Sultanah Kalsom signing a card to mark the launch of the SAS Privilege Club during the dinner.

TAT Alliance vice-chairman Datuk Seri Johny Ch’ng Ewe Gee said Tengku Fahd was the main person behind the preparations, sharing his ideas on how to make the party “lively and memorable” for Sultan Ahmad Shah.

“As he was unable to join the bash, he reminded me to extend a birthday wish to his Papa.

“Such is the filial affection of a prince who hopes that his father will be blessed with good health, merriment and longevity,” he said after the event.

Ch’ng said many SAS Privilege Club members were among the 550 people present, seizing the opportunity to meet and shake hands with the “birthday boy”.

He said some even managed to take selfies and group photos with the state ruler. 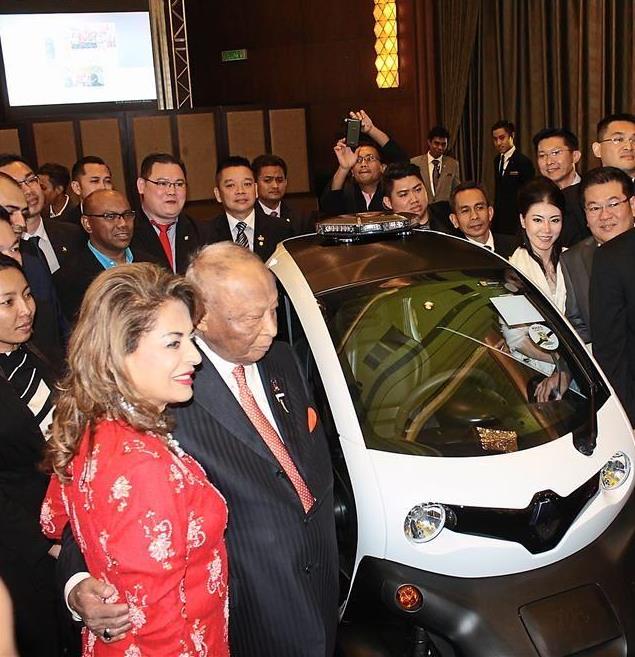 “This is a rare chance as Sultan Ahmad Shah sets aside all protocol to be with the people.

“So far, TAT Alliance has raised RM1.5mil to carry out activities to help the needy and less fortunate,” he said, adding that it was the aspirations of Sultan Ahmad Shah to look after the welfare of all his subjects.

Ch’ng said all club members were proud owners of the SAS series, originally reserved for vehicles registered in Sabah.

He said due to a special request by Tengku Fahd in conjunction with Sultan Ahmad Shah’s 40th anniversary on the throne last year, the JPJ had agreed to release the special series to the company.

“Besides getting special club privileges, all members must pledge not to misuse the number and safeguard the good name of the state ruler. “Part of the proceeds from the sales of the special number plates will go to the building fund for the construction of the proposed Wisma MCPF Pahang,” said Ch’ng, who is also the state Malaysian Crime Prevention Foundation chairman.

Among the highlights of the programme are a cultural dance from SJK(C) Pei Chai, performances by guests artistes from Indonesia and Thailand, and a recitation of a poem Sembah Setia Patik Jelata, Junjung Kasih Tuanku di Takhta by school teacher and poet Teo Wei Sing.