Stroke survivors in wheelchairs kicking off the walk in Jalan Yong Shook Lin.

WALKING may be a breeze to most people, but for retiree Betty Ng, 64, to take her first step after suffering a stroke was an uphill battle.

“In many ways, I cannot do the things I liked previously. I used to jog every weekend but I cannot do that anymore and I needed people to accompany me to work because I cannot do it alone,

Now that I have recovered, I am here today to show that if I can walk again, the others can do it too,” she said during the National Stroke Association of Malaysia (Nasam) Colour Walk 2015 recently.

Returning for the sixth time, the event at Petaling Jaya City Council carpark along Jalan Yong Shook Lin, Petaling Jaya was organised by Nasam to raise awareness on the number two killer disease in Malaysia.

Uniting stroke survivors and the public for the cause, Nasam founder chairman Janet Yeo hoped the participants would walk away with a new perspective on stroke as a preventable illness.

“When you ask any stroke survivor in the hospital on what they would like to do first upon recovery, they would say, walk.

“Walking is a challenge to these people, but most of us take it for granted. Walking is also a cheap and easy method of exercise to prevent stroke and keep ourselves healthy,” she added. 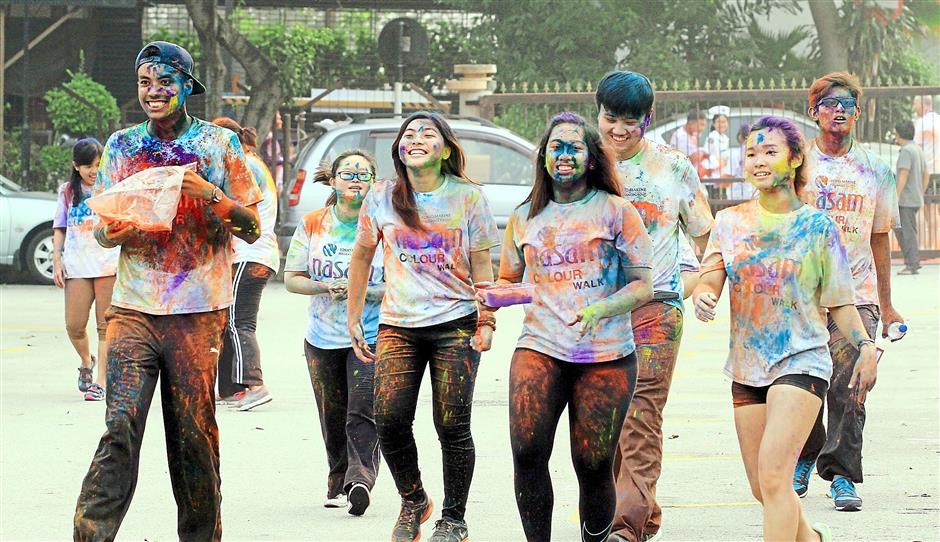 The walkers doused in colour powder during the walk.

More than 1,000 participants took part in the event with 50 stroke survivors walking a 1.5km stretch.

A new addition to the annual event was the dousing of colour powder at participants as they walked.

Hoping the participants would mimic the energy and vigour of the rainbow, Yeo aspired to motivate them to stay positive through the vibrancy of colours.

“We add the colours into the event to promote the idea of a good life after stroke. Having stroke does not mean the end of one’s life.

“Stroke survivors participating in the event today can be seen trying to walk and some participated in wheelchairs. The fact that they are trying is already a positive step,” she said.

One in six people worldwide will suffer from stroke in their lifetime and former soldier Syed Rosli, 44, can attest that stroke is not a disease exclusive to older people.

“When I first had stroke a year ago, I felt that my life was over. I was frustrated because I felt my life cannot return to normalcy when I look at my friends. What they can do, I no longer can.

“I had to relearn basic things like holding a cup with the right concentration of strength,” he said.

Preventive measures such as quitting smoking, having regular exercise, following a healthy diet, going for periodic health screenings such as monitoring blood pressure and diabetes, can help reduce the risk of stroke.

The participating states for the nationwide simultaneous Nasam Colour Walk 2015 are Selangor, Penang, Perak, Malacca, Johor, Sabah while Pahang’s session is on Nov 1.