Carrying on the legacy of Gandhi

(From left) ﻿Gyles-McDonnough﻿, Tirumurti, Ramachandran, Mahadev and Sree Harry﻿ at the debate finals.

IT WAS the moment of truth for two varsities in the finals of the enlightening Gandhi Memorial Debate and Awards presentation on Oct 2, the birthday of Mahatma Gandhi.

Advance Tertiary College (ATC) and Taylor’s University students animatedly debated in front of a panel of distinguished judges and guests during the event that was held in conjunction with the International Day of Non-Violence.

The topic for this year was “Ahimsa or moral persuasion and Satyagraha or transparency are more effective deterrents than nuclear threats and military intervention in the struggle to achieve human rights for all”.

The event, organised by the Gandhi Memorial Trust, saw eight tertiary educational institutions participating in the quarter-finals followed by the semi-finals.

Gandhi Memorial Debate 2015 organising chairman Datuk Mahadev Shankar said in the past, the trust held talks to commemorate the birth anniversary of Gandhi but decided to change it this year.

“We realised most of the attendees were from the older generation and so this year, we decided on a paradigm shift.

“We hope to instil moral values in the thoughts and culture of the young people,” he said.

“The key message we want to get across is that if we had abided by the rules of Gandhi in those days, things would be better today,” he stressed.

Mahadev also said they wanted to showcase the standard of English the country had achieved and the debate was a good opportunity to look at the calibre of the presentations made.

They hope to take the debate to regional and international levels in the future with participants from other Commonwealth countries.

Before the start of the finals, two distinguished members of the public were presented with the Public Service Award.

The first recipient was Datuk K. John Kuruvilla, 97, who was honoured for his contributions towards immortalising the memory of Mahatma Gandhi and is one of the founders of the Gandhi Memorial Hall in Sungai Petani, Kedah.

Kuruvilla was also chosen to read the Proclamation of Independence in Tamil during the Independence celebrations in Sungai Petani.

The second recipient was world-renowned scientist and academician Datuk Dr C.P. Ramachandran, who practices the Gandhian belief that science must serve the needs of humanity.

Dr Ramachandran has been involved in the study, control and eradication efforts of tropical diseases during his 18 years in the World Health Organisation (WHO).

Speaking to reporters, he said he was happy to receive the award in front of the younger generation.

Dr Rama said he had written his biography I am... because of you, to inspire young people.

“I want to inspire young people to take challenges because I had a difficult life. We do not get anything without working and now with technology everything is at our fingertips,” he added.

There was also a photography exhibition on Mahatma Gandhi and the struggles he went through while spreading moral persuasion and transparency. 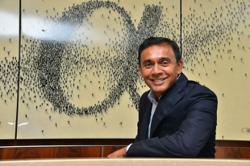