Feast on festival of fear

The scene was set for the happy nuptials of two Sunway Lagoon employees until the event was hijacked by the undead Mr Chaos and his less-than-lovely betrothed, Ms Havoc.

A portion of the amusement park has been transformed into a frightening landscape with a total of 13 scare attractions which will be specially opened to guests at night. An actor dressed as Freddy Krueger from the popular horror film, ‘A Nightmare on Elm Street’, reaching over the fence as guests queue up outside one of the attractions.

The event is the creation of New York-based The Sudden Impact! Entertainment Company, which began its partnership with Sunway Lagoon eight years ago with the opening of Scream Park.

“Two years ago, we came up with the idea to follow the global trend by creating a nighttime event for Sunway Lagoon,” said The Sudden Impact! Entertainment Company chairman and chief executive officer Lynton V. Harris.

According to Sunway Lagoon general manager Sean Choo, response to Nights of Fright has been very encouraging.

Escape From Pudu 2 returns from last year’s Nights of Fright, where visitors try to evade the ghastly inmates of the haunted prison. ‘Cleopatra’ emerging from her tomb in The Mummy’s Revenge: Tomb of Terror in 3D.

Another returning attraction is The Mummy’s Revenge: Tomb of Terror, now in 3D.

Visitors will be left wondering if the hellish illusion before them is just a painting on the wall or real, moving monsters.

One of the main highlights of this year’s many new attractions is Kevil Hill. 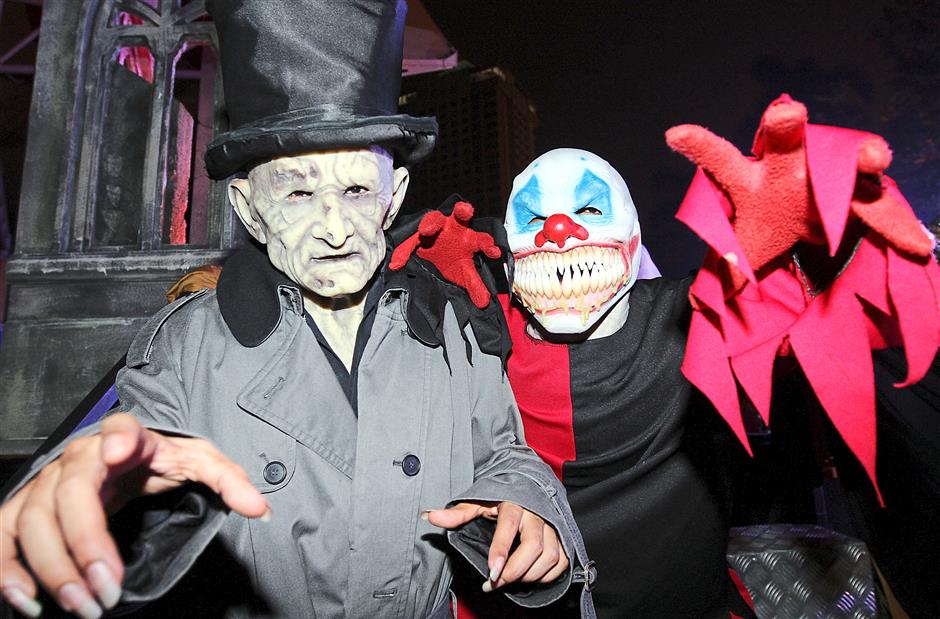 Two of the actors doing their act while posing for photos.

Also new is Toxic: The Scariest Place Unearthed, where visitors will step into a wasteland occupied by dangerous chainsaw-wielding mutants.

“This year we are expecting an even better response. Even before we launched Nights of Fright 3, we have been getting so many enquiries about it,” said Choo.

Sunway Lagoon is open for Nights of Fright 3 from 7.30pm to 11.30pm every Thursday to Saturday throughout this month. Choo (back row, in black T-shirt) and Harris taking a group photo with the finalists of Miss Cosmopolitan World 2015 and some of the scare actors. The pageant finalists spent the morning at the theme park and were invited for the media launch at night.

Only guests aged 12 years old and above can enter.

Tickets are available at RM58 per person, but daytime park guests get a special rate for Nights of Fright 3 on the same day at just RM35.