SHAH Alam will be starting its very own waste separation initiative this October in selected neighbourhoods.

The Shah Alam City Council (MBSA), known for its eco-friendly practices, have been mulling over the idea for some time now and decided to go ahead with the project on Oct 1.

For the first phase the council has selected five Residents Representation Councils (MPP) for the project involving between 200 and 300 homes each.

MBSA will be providing two 80 litre bins for each home and will increase the collection from twice weekly to thrice to include one day for recyclable materials. 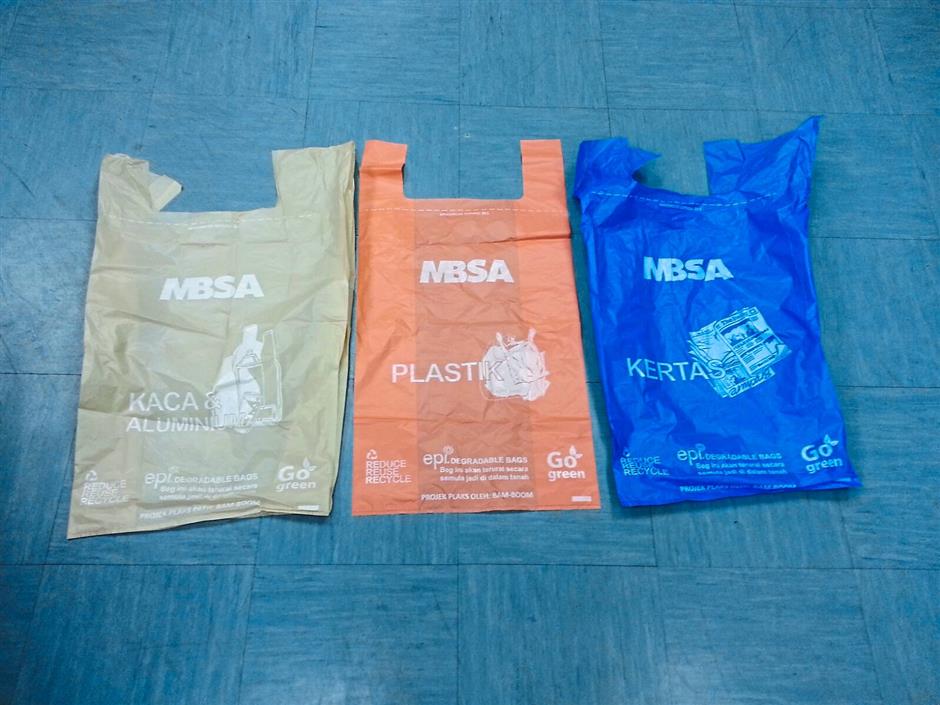 Organise your trash: The plastic bags to separate glass, aluminium, plastic and paper that MBSA will be providing for the recycling programme.

The collection of recyclables will be done on Saturdays since most people will be at home to sort the garbage.

Waste Management and Public Cleansing Department director Mohd Azmi Amer Khan said the areas were chosen based on the amount of garbage they produced a year.

Azmi said most of the selected areas were well developed neighbourhoods with large populations resulting in large amounts of garbage.

MBSA will also be giving out recycling bags to help identify the materials to be disposed. 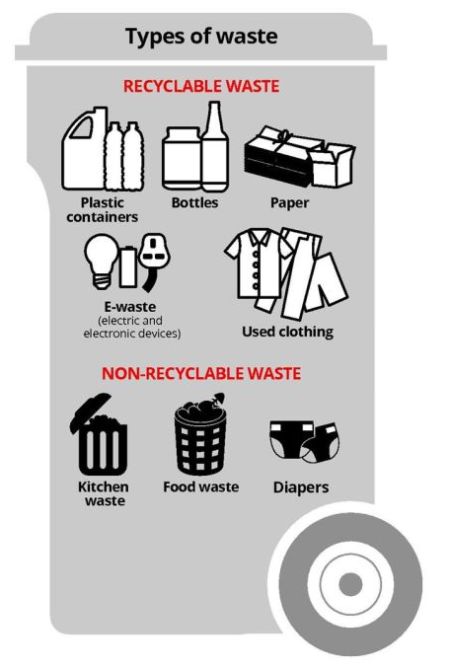 Azmi said the council hopes to reduce waste by 20% for each zone and believes waste separation is the first step to encourage recycling efforts.

Another of the council’s goals is to reduce the costs for waste management through the waste separation projects.

The council spends some RM12mil for domestic waste and RM2mil for public cleaning a year while the tipping fee per metric tonne at landfills is RM36.

Every day the council collects some 550 tonnes of domestic waste a day.

MBSA will be monitoring the situation and the collection through five officers who will be tagging along with the appointed contractor during their rounds.

The contractor will also be required to submit a weekly report including the types of waste collected.

Azmi said MBSA hopes that the people would respond positively and embrace the habit of waste separation for a better, greener environment.

Initiatives like this, he said, should start from the home with the entire family participating and parents instilling the habit in children.

“The responsibility does not lie with MBSA alone, the people also need to play a part.

“At the end of the day, it is a sustainable way to manage waste and save the council’s money so it can be used to upgrade infrastructure in Shah Alam,” he added.

The council has already started briefing residents and conducting demonstrations on the proper disposal methods.

Azmi said the council had received positive feedback from residents as well as the councillors.

“This is a pilot project and if it is successful we will expand it to other areas. The councillors have been supportive and some have asked us to include their areas in the project as well,” he added.

Azmi said it was important for them to work with the MPPs and the councillors since residents were the driving force of any project conducted by MBSA. 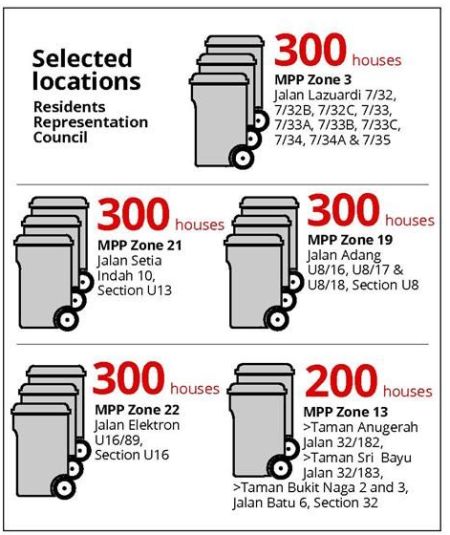 MBSA councillor Tengku Ahmad Tengku Kasim said the project was timely as other councils, including those in Malacca, were way ahead in green initiatives.

He said although 300 houses had been chosen for the pilot project, some 1,400 households volunteered to participate as well.

“However, MBSA faces a budget constraint for the one-year programme. They are providing bins and bags to sort the garbage as well, but the residents gave some good ideas that may be helpful,” says Tengku Ahmad.

Among the proposals are to provide only one bin per household instead of two so the number of houses in the pilot project can be doubled or to allow three or four homes to share one bin for the recyclable materials.

“The most important thing here is awareness, people want to start segregating waste and once they start it will be much easier.

“Hopefully things will change after this,” he said.