The Batu Berangkai waterfalls in Kampar where many youths had drowned here lately.

THOSE who are not professionally trained in swimming and diving should avoid coming to the Batu Berangkai Waterfalls in Kampar, said some orang asli villagers in the area.

Those interviewed by MetroPerak, who live a walking distance away from the waterfalls, said many people were unaware of the dangers that come with swimming or wading in this holiday spot.

A villager who wished to be known only as Amzi, 50, said some people on holiday were careless.

“Many of them think of having fun only and do not bother too much about the safety aspects.

“Those who have met with unfortunate accidents here are usually not from the village, that’s why they don’t know about the strong water currents here,” he said when met at his house about 50m from the waterfalls. 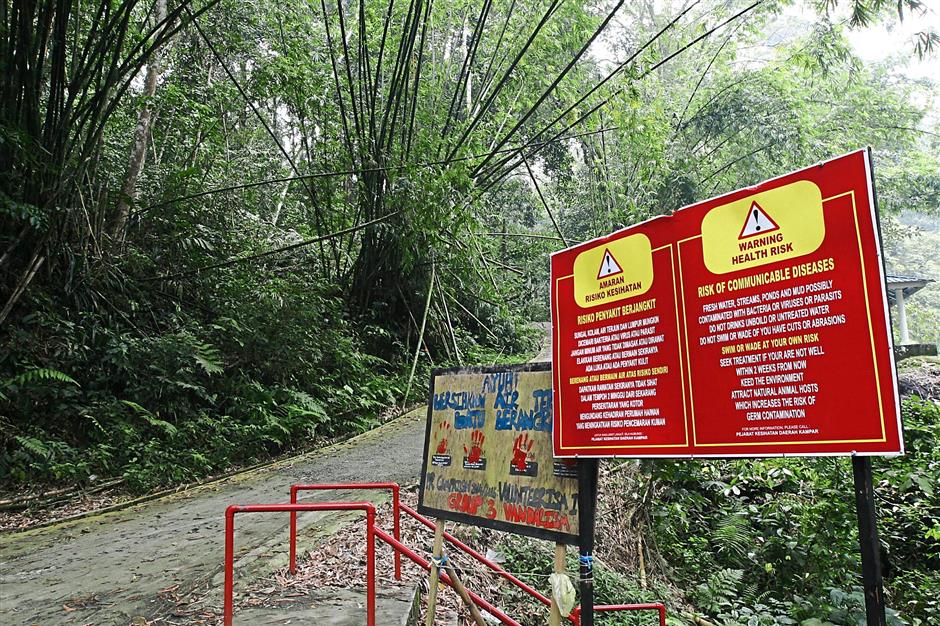 Signages put up to warn visitors about the dangers in the area.

Amzi said this in response to a question on the recent drowning of two brothers from Klang at the waterfalls earlier this week, and two more students from SMJK Pei Yuan, Kampar in July.

He said he has also seen a few people who dared to hike all the way to the top of the waterfalls.

“From what I have heard, the area at the top isn’t a picnic or swimming spot.

“If they don’t know how to swim or dive, I think they should not take such chances. They should not come to swim here at all,” he said.

Besides this danger, some villagers also believe that there is a spirit standing watch there called penunggu, a name which describes it waiting to claim lives. The area is clean but the waters can be dangerous.

Retiree Bah Daf Tan, 56, said this is what he has heard from the elders who live in the village.

“The part of the waterfall area where the brothers had drowned recently is what they call the lubuk puteri (the princess’ pond).

“I’ve heard of stories before where villagers who used to bathe at the pond will sometimes catch a glimpse of a woman sitting on the rocks. Villagers who used to bathe at the pond will sometimes catch a glimpse of a woman sitting on the rocks. - Bah Daf Tan

“She’ll disappear from sight when you notice her or try to look for her,” he said.

Bah feels that only people who have swimming experience at waterfalls should come here.

“But I guess sometimes when it comes to deaths like these, it’s all up to fate,” he said.

Similarly, homemaker Rokiah Bak Ujang, 47, warned outsiders to avoid swimming at the waterfalls during the rainy season, especially after a downpour.

“There used to be a very small dam up there, but now it is no longer in use. In the two cases over the last two months, the water looked calm and there was no water gushing down from the top of the waterfalls. -OCPD Ng Kong Soon

“From what I know, water will overflow from it after heavy rain, causing water to gush downwards rapidly.

“If you are not a good swimmer, especially in strong currents, please don’t go there,” said the mother of two.

Rokiah also recalled the stories about the penunggu, saying that according to the stories, it has to claim seven lives every year.

“Sometimes, old people who come jogging near the waterfalls die of a heart attack.

“This year there’s already been four deaths. I’m not sure if the stories are true. I hope not,” she said. If you are not a good swimmer, especially in strong currents, please don’t go there. -Rokiah Bak Ujang

When contacted, Kampar OCPD Supt Ng Kong Soon said the police were holding discussions with the district officer and Land and Mines Office to look into the real cause behind the multiple drowning cases that have occurred here over the past few years.

“We need to find out if there are any undercurrents in the area.

“The authorities are also trying to figure out the reason, but nobody can give a positive answer,” he said.

Asked if rapid water currents could have been the cause, Supt Ng said no.

“In the two cases over the last two months, the water looked calm and there was no water gushing down from the top of the waterfalls.

“However, we will ask the district officer to put up a signboard to warn people about drowning cases that have occurred here,” he said, adding that this was the immediate measure they can take to safeguard the public.

In 2009, three Universiti Tunku Abdul Rahman students drowned at the waterfalls as well, while a fourth was rescued. 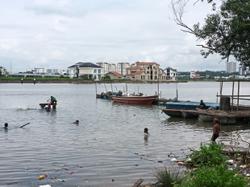