SARAWAK, as many of us know, is rich in biological diversity, including many species of plants and animals not found anywhere else.

But how many of us are aware of just how much our wildlife is under threat and in need of protection?

According to WWF-Malaysia’s Sarawak conservation programme leader Jason Hon, 279 plant species and 43 animal species of Sarawak are on the IUCN Red List of Threatened Species.

Of these, 100 plants and three animals are listed as critically endangered while the rest are considered endangered or vulnerable.

“We’re proud of our diversity, but there are also numbers showing species which are threatened or endangered. For example, the slipper orchid is constantly under threat from illegal harvesting and is now listed as critically endangered,” he said, adding that this species was only found in Mulu.

He also said other challenges included trade in wildlife and wildlife parts, with wild meat often sold openly in markets, and hunting of protected species.

Asking whether this was due to lack of enforcement, he hoped that cases of wildlife offences would be brought to court and prosecuted successfully.

“We would like to see the offenders charged in court. It’s important to send the message that wildlife crime does not pay,” Hon said.

Indeed, the need for better enforcement and prosecution was consistently highlighted in the workshop, which was organised by the High Court in Sabah and Sarawak in collaboration with the Natural Resources and Environment Board and WWF.

Another speaker, Leo Biddle of the Orangutan Project, said more action was needed to enforce wildlife laws and prosecute offenders.

He pointed out that the animals at Matang Wildlife Centre, one of the sites where the Orangutan Project works in Sarawak, were the result of wildlife crime, yet no one had been prosecuted.

He also cited a pet shop in Kuching where protected species were openly sold and a premises in Miri which kept protected wildlife as examples of cases where action should be taken.

“We need help from the judiciary. Without prosecution it’s not going to stop and we beg the judiciary to take this seriously,” he said.

Chief Judge of Sabah and Sarawak Tan Sri Richard Malanjum, in his welcoming speech, emphasised the need for more prosecution and tough penalties against wildlife offenders.

The workshop, he said, aimed to create awareness among court staff, including magistrates and judges, on the importance of environmental conservation.

“I can understand those enforcement agencies, when they bring a matter to court and the magistrate will say, ‘This is only a bird, only an animal’, and give just a fine.

“If the courts are very strict on prison sentences I think it will wake up a lot of us, especially the public.”

Coming down hard on wildlife offenders and illegal loggers was necessary, he added, in order to have a deterrent effect.

He also said the judiciary planned to hold further workshops to improve enforcement and prosecution of environment-related offences.

“The second stage will be capacity building. We want to train the prosecuting officers and investigating officers how to investigate and handle exhibits and we want to simplify procedures.

“The third workshop will be a review of the existing laws, where the shortcomings are, why they are inffective and why is it the penalty is so low, whether we should increase it and so forth,” he said.

Hopefully the workshop will result in more effective enforcement and cases of wildlife offences brought to court. Concerted efforts should be made by the relevant authorities, NGOs and the courts to tackle wildlife crime.

As Hon said in his conclusion, let us not turn Sarawak from a biodiversity hotspot into a hotpot. 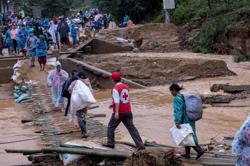