The participating artists and staff setting up the skate ramp, while others go for a spin. Star pic by: Gary Chen/The Star/August 7, 2015.

Another highlight is the art show that brings together 13 skate artists from Malaysia, Indonesia, Thailand and Singapore.

Yakyak was drawn into this lifestyle after hooking up with his brother’s friends in 1997, and is displaying one untitled artwork depicting the ‘distractions’ that lie beyond a skateboard park.

“I enjoy skating in new places, and love to travel and connect with like-minded people elsewhere,” said the full-time artist, aged 33. 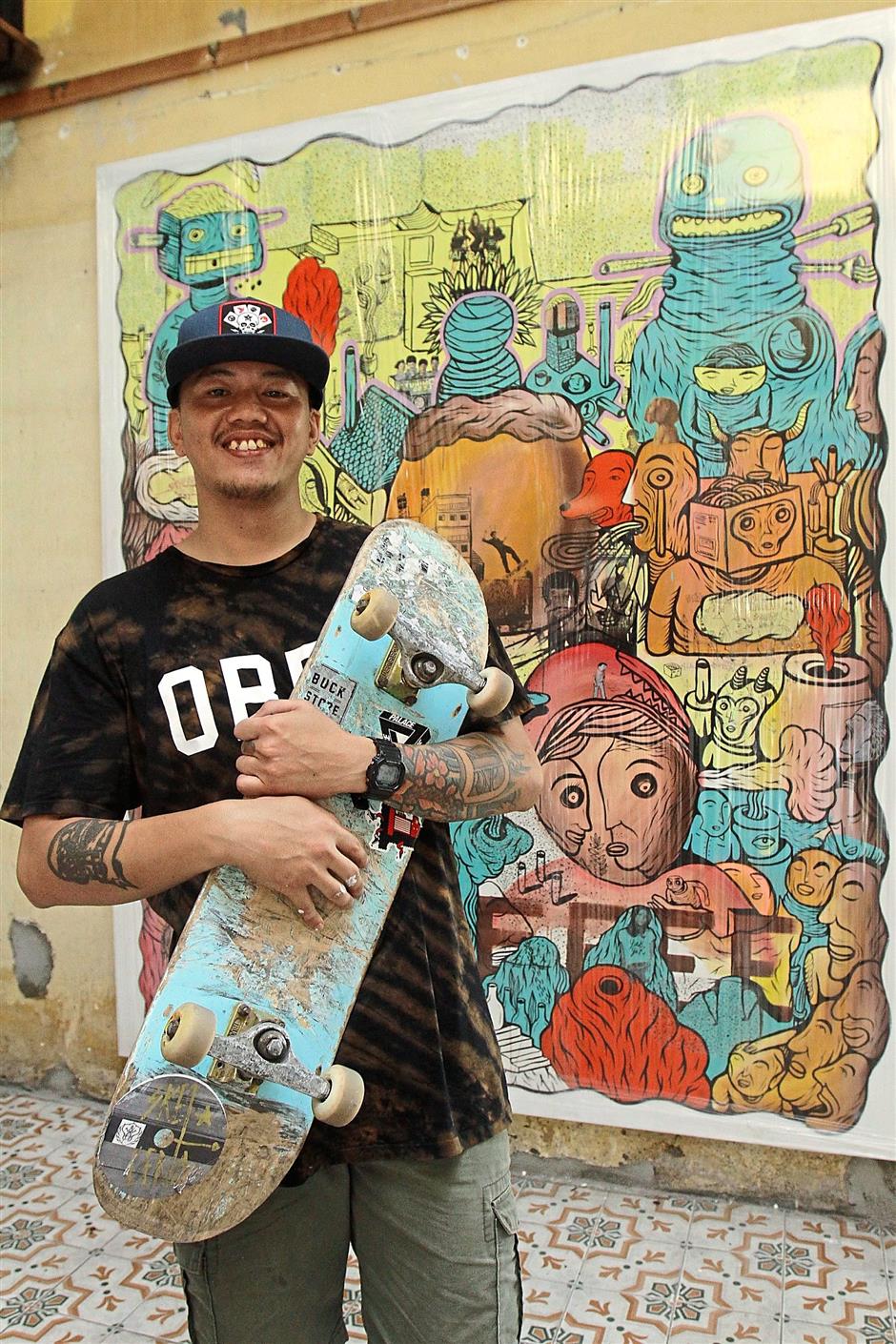 Fauzan’s singular piece, Wall Ride, is inscribed with the words No Skateboarding Allowed as a jibe against the restrictions and negative perceptions skateboarders often have to face.

“It’s just a sport like any other, and has made me a better person.

“It taught me to be brave and tough.

“When life knocks you down, just get up and try again,” he said at the show’s press preview recently.

Besides the individual artworks, the artists have also collaborated on installations and graffiti walls, and have also set up a skate ramp for the workshops.

Fifty Fifty programme manager Munir Muhammad said the free workshops will be held at 10am tomorrow, Aug 22 and 29, with a small competition to identify the best talents.

Those interested may register online via www.fiftyfiftyskatefest.com or by filling up forms at the Hin Bus Depot or Vans Boutique in Queensbay Mall.

“We want to promote the skateboard lifestyle, which is a fun and unique way of life.

“It has its own media and music,” Munir said, adding that the show’s name refers to a skateboarding trick, the 50-50 grind.

On Aug 29 from 4pm to 10pm, there will be a Skate Fest featuring music from local bands like Oh Chentaku, Bittersweet, Popkonspiracy and Maddthelin.

Other artists involved in the show are Malaysia’s Orkibal, Fritilldea, District and Iman, and Indonesians Ryan Addy Putra, Okta Samid, Dhika and Brojjol.

Joining them are Thailand’s TRK, and Singaporeans Jamil Abdullah and Nur Qashnida, as well as local photographs by Haizan, Shahree Zane and Ameer Hakim.