2 A structure of a worker’s canopy from an LRT construction site fell on the LDP.

However, there were no casualties reported during the freak thunderstorm which led to many in the Klang Valley to return home late after work.

In Bandar Puncak Alam, Fire and Rescue Department personnel were deployed to rescue some 25 children and teachers from a kindergarten after waters reached 1m.

He said clean-up work was being done by the affected residents. 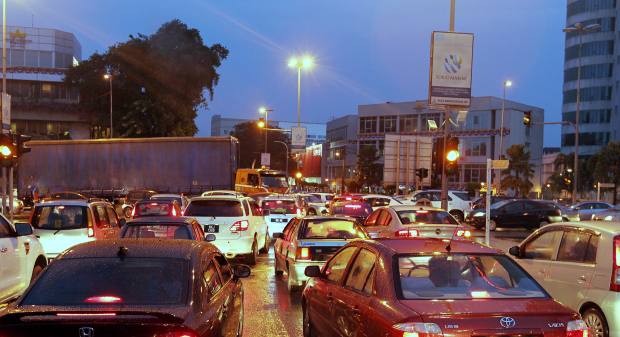 Traffic lights at the former Rothmans roundabout in Petaling Jaya stopped working during the thunderstorm resulting in standstill traffic during the evening rush hour.


Fire and Rescue Department personnel from seven different stations throughout Selangor were called out within the space of three hours to deal with collapsed trees in Rawang, Bangi, Puchong, Cheras, Morib and on the Rawang-Batang Berjuntai road, which had caused traffic congestion.

The Ampang Jaya Municipal Council (MPAJ) said it would continue to monitor for signs of slope failure after a landslip occurred along Jalan Zamrud in Taman Bukit Ampang following the downpour.

Fire and Rescue Department personnel rushed to the scene after earth movement was detected on the 3m hillslope behind a row of houses causing a drain embankment to crack.

There were no reports of injuries during the 7pm incident.

“We will also be covering the damaged portion of the slope with tarpaulin and continue to monitor the site,” said Norhayati.

She added that some RM30mil would be spent on slope rectification works in six areas within the municipality.

Resident C. Poornima, 70, said the landslip affected one of the homes in the area.

“There was some commotion on Tuesday night and we only knew later that it was soil movement.

“Although this is the first time in the last 30 years that this has happened, it is quite worrying.

“I can only hope that the situation does not worsen,” she said.

Meanwhile, a structure of a worker’s canopy from an LRT construction site fell onto the Damansara-Puchong Expressway (LDP), following the thunderstorm. 
The incident, which occurred just before the U-turn heading towards IOI Mall, caused traffic congestion from 5pm.

“Fortunately, there were no injuries as the structure did not fall on any vehicle,” he said.

“We have already ordered the contractor to make sure all canopies are properly mounted,” he said.