Spreading a message of peace

This year, the campaign will be focused on raising awareness about nuclear weapons and how it can destroy a country in seconds.

With 2015 also being the 70th anniversary of the atomic bombing in Hiroshima and Nagasaki in Japan, SGM echoes Soka Gakkai International’s global peace movement which calls for the abolition of nuclear weapons.

“Every year, we celebrate the Month of Peace in September to create awareness of peace in the society and to promote good moral,” said SGM president Michael Kok.

He added that there will be two events held in conjunction with this campaign, – a peace run and an exhibition.

Organised since 2005, its biennial Run for Peace 2015 event will be held in 19 locations nationwide this year.

“We have added five more locations for the run this year which will take place from Sept 6 to 20,” said the run’s organising committee member Tai Yen Fei. One of the volunteers at Soka Gakkai Malaysia explaining the peace exhibition to visitors.

In the Klang Valley, the run will be held on Sept 20 at Padang Besar, Jalan Selampit 29, Taman Klang Jaya, Klang and at Stadium MBPJ in Kelana Jaya.

“We initially wanted to have similar dates for the run at all venues but we couldn’t get the venue and date we wanted for all locations,” he said.

This non-competitive 8km run welcomes people from all walks of life including the disabled, young and old.

The previous runs saw participants who came with crutches, wheelchairs and even the blind with walking sticks.

“We just want everyone from all walks of life to come together for this run and to run for peace,” said Tai.

The exhibition titled “Everything You Treasure-For a World Free From Nuclear Weapons” is already open to the public. 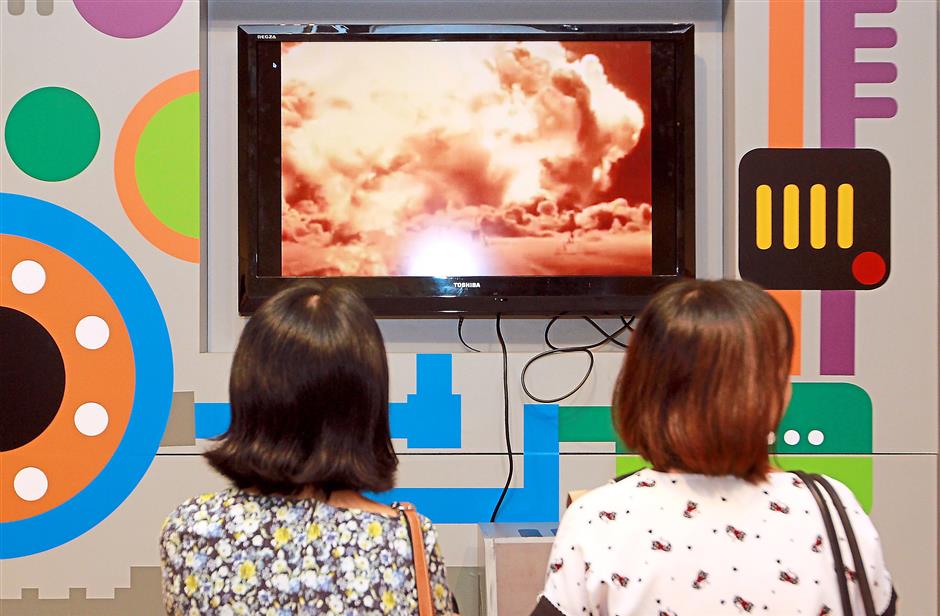 Visitors viewing an interactive display of a nuclear explosion at the Peace Exhibition.

“This is the first time ever we are having this exhibition here and its a joint initiative by Soka Gakkai International and the International Campaign to Abolish Nuclear Weapons (ICAN),” said the exhibition’s organising committee member Chia Kok Peng.

He said the exhibition was to further educate the public on nuclear weapons.

The exhibition, which was first held in Hiroshima, Japan in 2012, is presented in three languages – Malay, English and Mandarin.

Apart from text and pictures, there are also interactive games.

“We hope to get at least 100,000 visitors touring our exhibition at 14 locations nationwide,” he said, adding that schools were also being invited for the exhibition. SGM is also inviting the public to fill in a National Peace Survey on their website, to help them gauge Malaysians’ perception and understanding of nuclear weapons.

This survey will be on until Aug 15 and is targeted at those aged 13 and above.

There will also be a peace forum on Sept 26, titled “International Day for the Total Elimination of Nuclear Weapons” to be held at Wisma Kebudayaan SGM from 11am onwards.

Those interested in taking part in the run and get more details about the exhibition can log on to www.sgm.org.my