Lane with a lot to offer draws the crowd

PANGLIMA Lane or Yi Lai Hong (Concubine Lane) in Ipoh has seen a revival of sorts as the area is now bustling with activity.

Already a popular tourist spot, the lane is seeing an influx of visitors with the setting up of several souvenir shops and eateries there now.

Also, several wall murals by Lithuanian artist Ernest Zacharevic in the area and the opening of the Han Chin Pet Soo (Han Chin Villa) exhibition centre have also attracted tourists from near and far.

Four years ago, when the front portion of several shophouses there collapsed, visitors kept away for fear of the danger posed by these pre-war buildings. 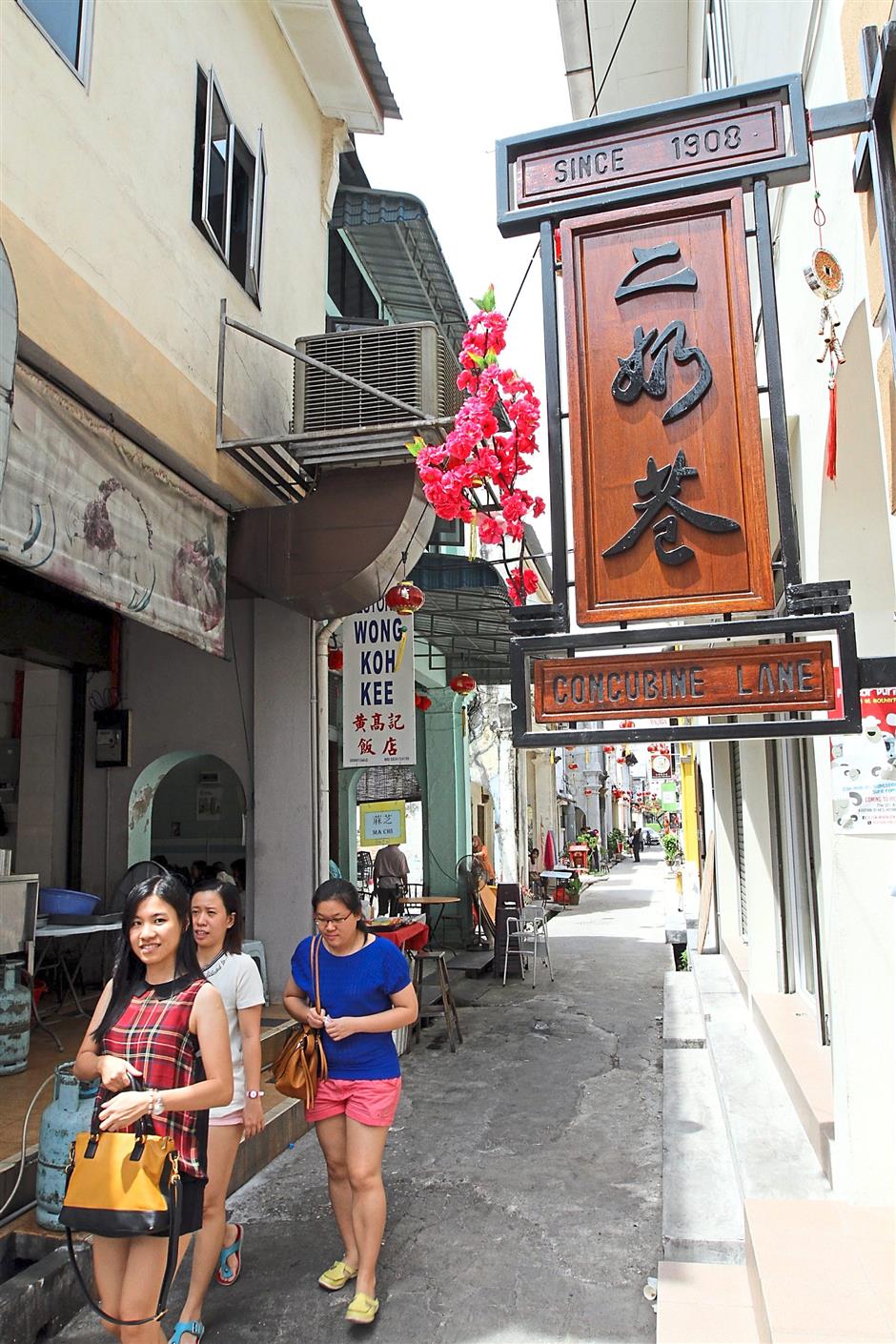 Tourists walking past an old signboard.

Renovation works on some of the damaged and old buildings then slowly began to take place, with the souvenir shops, eateries and also a homestay being set up.

Long-time resident Low Poh Choy, 69, said the lane would be packed with tourists during weekends and public holidays.

“There are lots of coffeeshops nearby, which most tourists flock to.

“The souvenir shops as well as a tau foo fah shop along the lane have also attracted more people to visit here,” he said.

Low said he was happy about the “livelier” atmosphere in the area.

“It’s certainly more happening now even when compared to the 1960s and 1970s, when most shophouses were still occupied,” he said.

“I expect more shops would be opened in future to attract tourists,” he added.

Visiting the lane for the first time, a clerk who only wanted to be known as Choong, said she had heard so much about the lane from her friends.

“I was born in Ipoh but have never visited this lane and I was curious to see what it was all about for myself.

“The place is certainly interesting, with some things to see here,” said Choong, who is in her 30s.

“I believe it will be packed with more tourists in future,” she added.

Retired marketing manager Jeffery Tang, 60, said he was surprised by the development at the lane. “I visited this place about a year ago and there was nothing much to see then, apart from the pre-war buildings.

“There are souvenir shops and eateries now so there’s certainly more attraction,” he said.

“But unlike Jonker Street in Malacca, this lane is short and should be developed further to make it more popular,” he added.

“But I feel that this place, or Ipoh and the state for that matter, still lack attractions.

“People only come here for the food. I believe the government should do more to develop and promote Ipoh and Perak as a whole,” he said. The remnants of houses along the lane that collapsed a few years ago. Now most structures there have been refurbished and are in a good condition. – filepic

“It’s obvious. The number of tourists coming here is growing by the week.

“I feel that it can only get better,” he said.

Dr Gurmail, who owns several shophouses there, said that there was a group called “Concubine Lane Group” that was committed to looking after the lane.

“The group has organised gotong-royong, looked into the cleanliness and security aspects, held promotions and generally all other aspects of the lane as well,” he said.

Dr Gurmail also said the safety aspects regarding old buildings there were no longer an issue.

“Many of these buildings have been refurbished and renovated.

“Our concern now are the drains and pavement on the lane, which are broken,” he said.

“The pavement could cause people to trip and hurt themselves,” he said, adding that he hoped the Ipoh City Council would repair these to make it safe for senior citizens or the disabled.