1 Lam (right) looking at some of the durians on sale at a stall run by a trader named Ting (centre).2 Durian stalls are popping up like mushrooms along a main road in Bercham.3 Mohamad Abdul Samad (right) and his son holding the “Durian Jantung” species - so named because of the heart shape the breed has.4 Cloned durians, from the D24 to Musang King varieties, on sale at a stall near the Canning Garden roundabout in Ipoh.Photos and video: RONNIE CHIN

HOT weather or not, there is no stopping them.

So spellbinding is the durian that all it takes is the sight and smell of the King of Fruits to convince any durian-loving person to stop by the roadside and cart home a few fruits.

As said by lecturer Ong Yoke Mooi, it is not every day that one gets to eat durians.

“Durians are seasonal. We don’t get it all the time.

“I will just eat them if I want to, even though the weather is hot and dry.

“I love durians,” said Ong, adding that she gargled with salt water after each round of feasting to prevent from falling ill.

This season itself, Ong has been buying durians every alternate day from trader Lim Son Ang, who sells the thorny fruit from his parked car across the road from Desa Tambun Indah. Mohamad Abdul Samad (right) and his son holding the “Durian Jantung” species - so named because of the heart shape the breed has.

“I’m trying to control myself but when I do, I either can’t sleep at night or I can’t do my work just thinking about durians,” Ong confessed.

“Hopefully, this durian season lasts longer so that I can enjoy more of it,” she added.

Lim, 68, who has been selling kampung durians from his fruit orchard at the same spot for the past 10 years or so, said sales had not dropped despite the hot weather.

Noting that the majority of his customers were regulars, Lim said those with health conditions such as diabetes and heart disease might eat less durians but it was impossible for them to abstain from it.

A case in point is 86-year-old Lam Yee San, who despite being a diabetic and suffers from hypertension, still enjoys his durians on a regular basis. 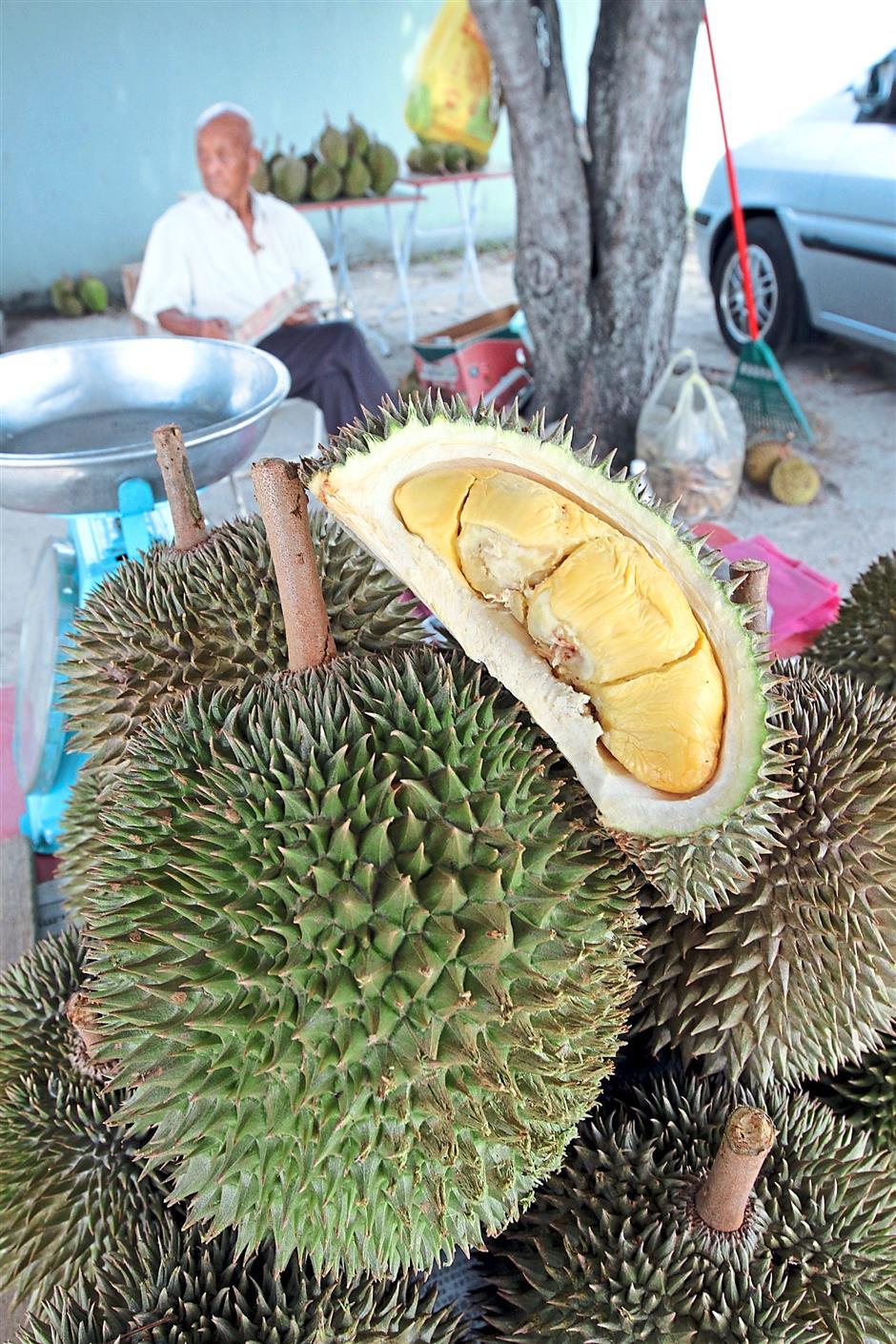 Cloned durians, from the D24 to Musang King varieties, on sale at a stall near the Canning Garden roundabout in Ipoh.

“My children have stopped me from devouring them but I’m allowed to enjoy a few seeds during the durian season.

“I make sure I drink lots of water to cool the body after that.

“Water with fruit salts also help expel the wind in the stomach.

“I can’t resist durians; they are my favourite.

“The mere sight and smell of durians is all it takes to set off a craving, and it doesn’t matter if they are kampung durians or the cloned varieties,” added the retired businessman.

A couple in their 60s, who were spotted buying the Musang King variety at a stall near the Canning Garden roundabout, similarly confessed that the constant sight of durians was too difficult to resist.

“We drive past the stall every day and it is extremely hard not to think about durians.

“But because of health reasons, we choose to eat only the best and in moderation,” said the husband, who only wanted to be known as Chin.