(From left) Pheng, Huang, Liow and Yong at the opening ceremony of Wisma Hakka Malaysia.

THE Federation of Hakka Associations of Malaysia now have a place to call their own with the establishment of its headquarters — the Wisma Hakka Malaysia, which is located off Jalan Ipoh, Selayang.

It was launched by MCA president Datuk Seri Liow Tiong Lai on Saturday.

In his speech, he praised the Hakkas for their spirit to strive for success.

A pre-launch welcome dinner was held on Friday at Vivatel Kuala Lumpur where a token of appreciation was given to 18 donors who donated more than RM100,000 for the construction of the headquarters.

Local and foreign Hakka associations such as one from Meixian, a district of Meizhou prefecture in Guangdong, China, also gifted calligraphy and art pieces to the federation.

There were also song and dance performances that night to showcase the Hakka culture.

Yong, who also attended the welcome dinner said, in his speech, that the federation was formed in 1978 and consisted of 78 Hakka associations nationwide.

According to census, 1.65 million of the 6.55 million Chinese in Malaysia are of Hakka descent, making up for one fourth of the Chinese population. 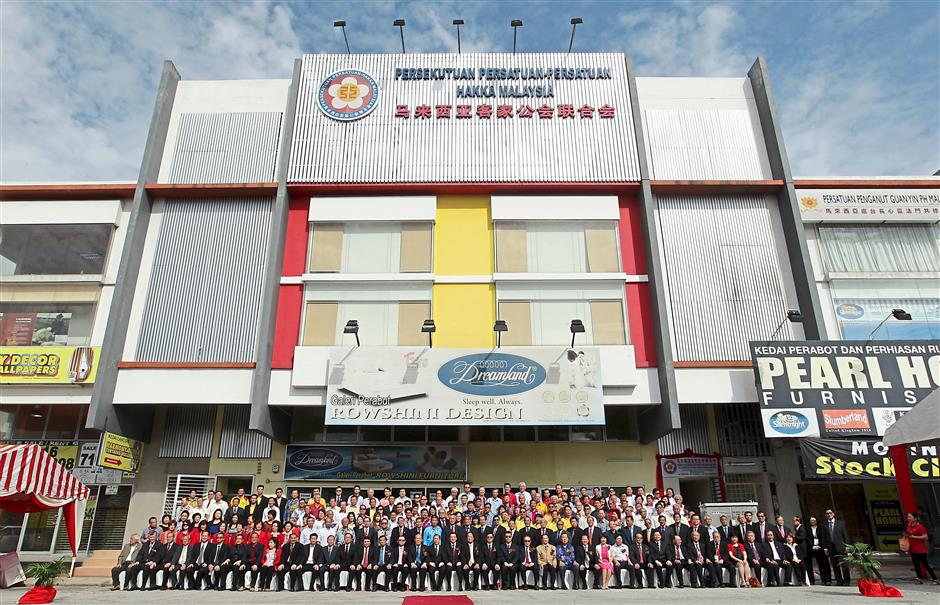 A group photo of the guests who attended the opening ceremony of the Federation of Hakka Association Malaysia’s new building by Liow.

“We are a very active association, the youth and women divisions are two very important parts of the association, we often organise many activities.

“The idea for a headquarters came about five years ago. It not only provides space for our activities but the ground floor could be rented out,” he said.

International Trade and Industry Deputy Minister Datuk Lee Chee Leong, who was also at the event, noted the contribution of the Hakkas to the society and Chinese education.

“The Chinese associations play an important role in the country’s economic development.

“China is Malaysia’s biggest trade partner. With the increasing good relationship between Malaysia and China in recent years, Chinese associations is one of the important factors in improving China-Malaysia relations.”