1 Fisher villagers from Mount Santubong to Sematan and Lundu will be given the TED nets, which allows trapped sea turtles to escapes from nets. The villages are near the Pulau Talang-Satang National Park, a turtle sanctuary.2 Fisheries Research Institute director Albert Chuan Gambang (middle) launching a guidebook on the TED net for fishermen at Santubong, near Kuching, yesterday. Also seen here is Marine Research Foundation chief executive Nicholas J Pilcher.

A NEW fishing net being distributed in Malaysia could save the lives of thousands of marine turtles.

Full deployment of Turtle Excluder Devices (TED) nets would also pave way for more seafood here to be exported to countries like the United States, which has stricter marine product sustainability import rules.

Since 1987, all products from Malaysian shrimping trawlers have been banned from the United States.

In 2011, the Malaysian Fisheries Department began trials on TED nets in Sabah, and this week, it conducted the first seminars for fishermen in Sarawak. The goal is to have at least 30% of all boats in the country outfitted with TED nets by 2020.

“This is the first step in a long journey to better practices,” said Belayong Nyuak, the department’s state director at Kampung Santubong, a fishing community. “If we can reach full compliance, then we’ll regain the right to export shrimps to the United States. By fulfiling TED, it also means we’ll have better long-term marine life sustainability.”

The TED method has been in used in most advanced nation’s fishing industries since the 1980s. 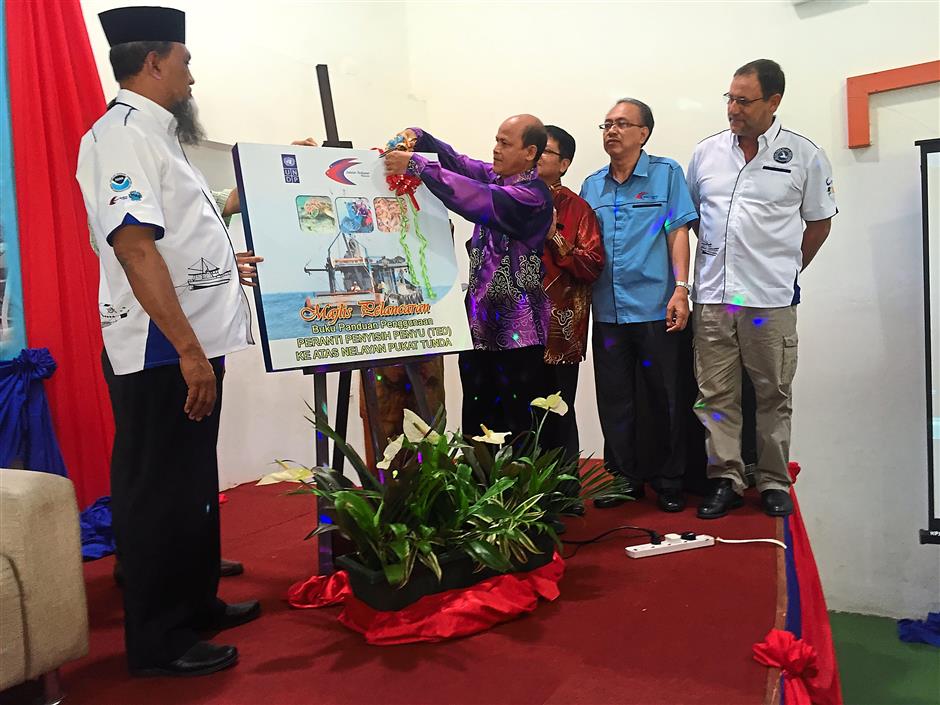 It is a device that allows a captured sea turtle to escape when caught in a net. Sea turtles are typically netted when bottom trawling is used by the commercial shrimp fishing industry.

A TED outfitted net is basically two components – a metal grid integrated midpoint in a long net with spaces between bars wide enough to allow marine creates like turtles to pass through. Once the animals pass the bars, there is flap that they can push through to escape.

Shrimps, meanwhile, are pushed to the back of the net. Turtles aside, TED also allows other animals like dolphins and dugongs to pass through.

“In trials conducted in Sabah, the average time it took for a trapped turtle to escape was one minute 17 seconds, which leaves enough time for them to surface for air,” said Belayong.

The seabed under five nautical miles from the shore is important for marine life breeding and nursery. These are very sensitive areas and require careful fishing for sustainability. If you don’t care take of this area, then it will have a knock on effect on deep sea fishing as well.

Belayong said there was no doubt even small-scale fishing activities were harmful.

The state government used the number of sea turtle population as an indicator of marine life stability. “The landing of turtles on those island tells us whether there is enough shelter and food in the seas. This also tells us if fishing community will have enough to catch,” he added.

Fisheries Research Institute Sarawak Sarawak and Labuan director Albert Chuan Gambang said there were other TED benefits like reduction in unwanted netting. “In Sabah trials, we found TED nets would also allow rubbish and objects like rocks to escape, there by reducing drag. On average, we found TED net reduced diesel usage by about 10%, which is significant. This even lessens net damage,” Chuan told the seminar.

To encourage adoption, free TED nets would be distributed to fishing communities in Santubong, Lundu and Sematan, which are near the Talang-Satang National Park, a turtle sanctuary. Turtle hatchings at the national park is between 150,000 and 300,000 annually.

There are currently 16,000 licensed fishermen in Sarawak, including 2,200 foreigners, operating a total of 7,226 vessels, of which over 6,500 are small fishing boats. Only 693 are large vessels capable of deep sea-fishing.

According to the Fisheries Department, the population of sea turtles began to deteriorate around 30 years ago.