2 This site at Desa Baiduri has been turned into an auto graveyard for these abandoned motorcycles.

CARS and motorcycles are left to rot in several areas in Bandar Baru Air Itam on Penang island even as residents of high-rise apartments there are finding it hard to find parking bays for their vehicles.

Many leave their unwanted vehicles in parking lots or along the roadside.

The Star ran a check in the township and counted over 30 abandoned cars in two hours.

Parked in plain sight with other cars, these were covered in road dust, bird dung and fallen leaves.

The road taxes have long expired or were stripped off, and most of the tyres were deflated.

Some of the cars are filled with rubbish — tins, waste paper, plastic chairs and bottles. A car covered with creepers has been dumped in Desa Intan.

Two abandoned cars were found, including an old Honda with a road tax that expired in 2010, at the multi-storey car park in Kompleks Farlim.

A few cars in Desa Intan even had weeds and creepers growing out of them. There were eight abandoned cars in Desa Ixora flats area.

Desa Ixora resident Julie Chua, 49, said some of the vehicles had been left for more than a year.

“We are already short of parking space and have to double park. People who dump their unwanted cars make it worse for us.

“These cars are also habitats for pests like rats, cockroaches and mosquitoes,” she said when interviewed at Solok Angsana on Tuesday.

A mini market worker in Jalan Semarak Api, pointing to a junked Peugeot, claimed to know the owner. 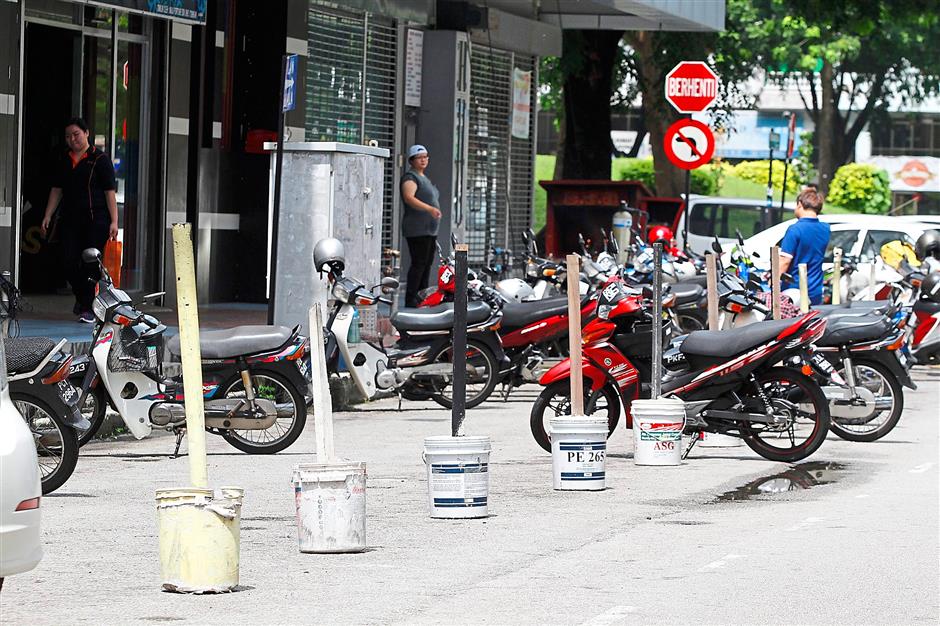 Obstacles have been placed on these parking lots to prevent the public from parking their cars in Bandar Baru Air Itam.

“He bought a new car and since this old one had no trade-in value, he just left it here by the road,” she said.

“Some selfish people leave their old vehicles in car park lots after buying a new one. They are not bothered whether this is taking up valuable parking space,” he said.

“This has been going on for years. Why are the authorities not taking any action? Are these shopkeepers paying car park rental to the Penang Island City Council?” he asked.

“This one is in the flat’s car park. If the owner doesn’t remove it by June 12, we will tow it out the following day,” he said.

Yong said the management only had the authority to tow abandoned vehicles out of the apartment’s compound.

“Anything beyond that is under the jurisdiction of the Penang Island City Council,” he said, adding that the problem is an ongoing one.

“What we do is lodge a police report and then one with the council. We will then proceed to give a notice to the car owners and tow them out of the compound if they are still unclaimed,” he said.

He said the MBPP would trace the owners of the vehicles with the help of the Road Transport Department and slap them with a fine under Section 46 of the Street, Drainage and Building Act 1974 for causing obstruction in public areas.

“The fine is RM30 for first-time offenders and increases gradually up to RM500 if the vehicle is still not removed,” he said.

He said the onus was owners to dispose off their unwanted vehicles.

“It is costly for the MBPP to tow the vehicles. There is also not enough space to store abandoned vehicles,” he said.