1 Runners trying to slide down the sloping path with the help of a rope.2 A runner in the midst of going through the jungle.3 Runners keep themselves hydrated during their run.4 Tengku Kamarul Zaman (third from left), Sharkar and Tioman Development Authority general manager Datuk Hashim Mat Tahir (left) having a light moment with the champions of the different categories of the race.5 Tengku Kamarul Zaman flagging off the participants. Looking on are Mat Tahir and Tourism Ministry Pahang Office general manager Idros Yahya (left).

ROMPIN: It was undeniable a hardcore race to all the runners despite they were mentally and physically fit in the recent Sultan Ahmad Shah Tioman International Eco Challenge (Sastiec) in Pulau Tioman.

The 31km race on the island however, looked easy to most of the participants as many of them managed to complete the whole course with minor injuries which were normal to them.

Among the 200 participants were 20 athletes from Kenya, Monaco and Japan. The annual event made its debut in 2008.

This year’s event was themed “The Ruby Jubilee Race”.

And the theme was to commemorate the His Royal Highness Sultan Ahmad Shah’s 40th year reign as the Sultan of Pahang who loved nature, conservation and eco-adventure.

Sastiec founder and president Lt Kol Tengku Datuk Seri Kamarul Zaman Sultan Abu Bakar, said the event had not failed in its message to promote the conservation awareness on culture and nature to preserve sustainable tourism with a little adventure. 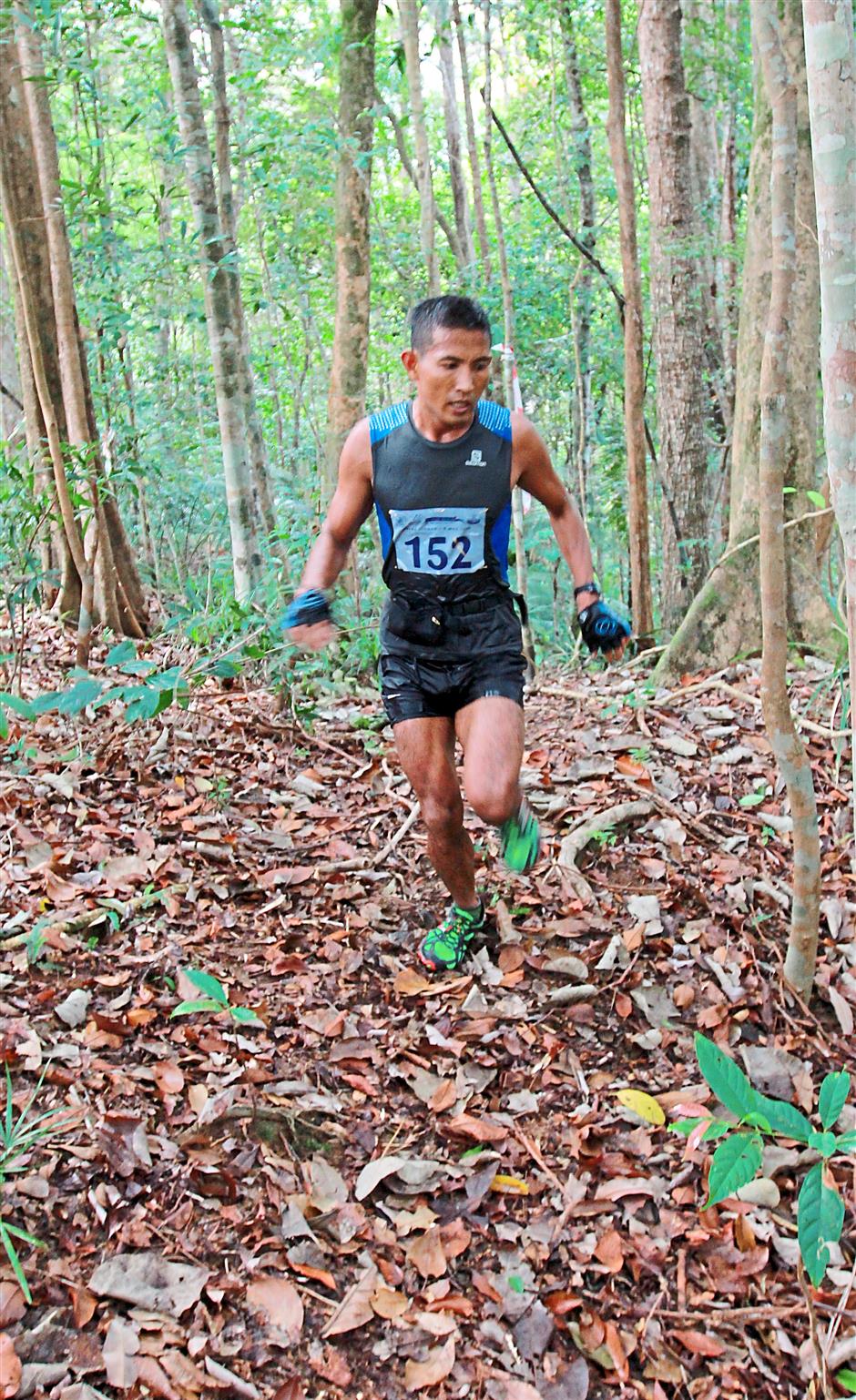 A runner in the midst of going through the jungle.

Tengku Kamarul Zaman said the race was a tough test for the participants both mentally and physically as they could not avoid the challenges of its grueling terrain, with limited water to drink during the race.

“Pahang Darul Makmur, one of the biggest state in Peninsular Malaysia is known for its diversity of flora and fauna, grueling terrain, breathtaking waterfalls, a myriad of cultural practices and tantalizing culinary feasts that offer immense potential for eco-tourism and adventure racing activities.

“This year’s race which covered 31km was like a playground for the participants, as its route maintained scenic and breathtaking sights and sounds of the island.

“The race was a perfect opportunity for running and adventure sports enthusiasts to head to Pahang’s most treasured eco tourism island,” he said.

Meanwhile, organising committee chairman Kol Datuk Thong Kok Sing said the 200 participants had to be filtered before they could join the run as the committee had to limit the number of participants.

Kol Thong said the race had managed to develop public interest in eco-tourism, promoting the community-based eco-tourism which was according to economic agenda in the state while it drove public awareness on nature conservation and sustainable tourism.

Runners keep themselves hydrated during their run.

“I believe that the race too has managed to promote the extreme sports and of course, only determined and hardcore runners were able to get through all the challenges along the route,” he said.

Mohd Sharkar said the event which had attracted international runners was a testimony that Tioman Island is a lovely place visit.

“The island has to be developed in a smart way and not at the expanse of sacrificing its nature,” he said.

The race was divided into two main categories - International and Local.

Tengku Kamarul Zaman (third from left), Sharkar and Tioman Development Authority general manager Datuk Hashim Mat Tahir (left) having a light moment with the champions of the different categories of the race

In the race, Kenyan Enock Kipchirkigen who clocked 3:38:58 was the overal champion in the men’s international category, while country mates Nelson Kipttoo (3:50:00) was second and Tetment Stanley Cheroiyot (4:01:10) took third spot.