ipawaiter240515 1... Japanese student Nami Yamauchi (centre) carrying her tray carefully while trying to walk as fast as possible during the Ipoh International Waiters Race at Lost World of Tambun on May 24. Behind her is another Japanese participant Miki Osuga.

IT was a warm and sunny morning at the Lost World of Tambun, where more than 300 participants from the hospitality industry had gathered to put their speed and skills to the test in the Ipoh International Waiter’s Race.

During the race, participants were required to walk a 1.1km route around the theme park while carrying two glasses of coloured water and a 500ml bottle of mineral water on a tray using only one hand.

Into its third edition, the race, which aims to acknowledge the service of waiters, also attracted six participants from Japan and seven from Indonesia.

One of them was Fukuoka-born Nami Yamauchi, 19, who is currently taking up English Studies at the Sunway University in Selangor.

She said the race was harder than it looked. 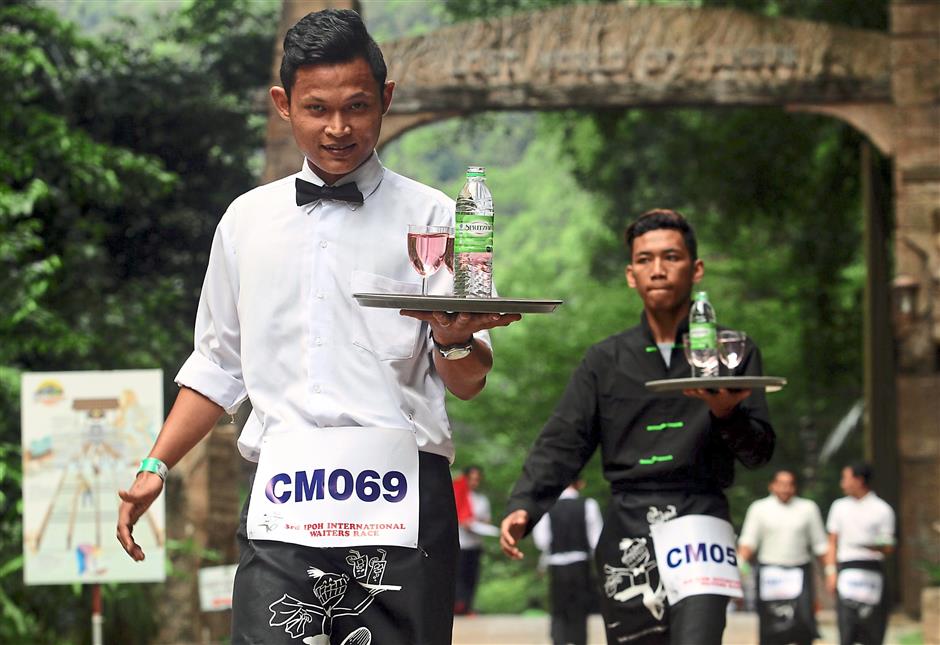 Participants in the Classic Tray male category walking along the 1.1km route in the theme park during the Ipoh International Waiter’s Race. Photos: SAIFUL BAHRI

“There are parts of the route that wind uphill and as such it was challenging to be fast as well as maintain my balance and hold on to the tray at the same time,” she said after participating in the Sportive Tray category for females during the race last Sunday.

Having worked part-time as a waitress during her high school days in Japan, Nami said she has had some experience in waitressing before.

“Although I was very careful not to spill any of the water onto the tray, other people were faster than me.

“However, I am still happy that I came in eighth place,” she said.

Nami added that she chose to study English in Malaysia because she loved the tropical weather here.

Another Japanese participant, from Tokyo, was Miki Osuga, 23, who came in sixth place.

“I struggled to keep my balance all the way, and I still spilled some water onto the tray while trying to make it to the finishing line.

“But it was a very good experience. I have never taken part in an event like this back in Japan,” she said.

Like Nami, Miki also did some waitressing when she was still studying Malay at the Tokyo University.

On why she decided to pursue Malay, she said she wanted to learn a language that many Japanese would not know.

She is currently working for Sony Malaysia.

The race offered attractive prizes, and was open to male and female participants in three different categories.

For the Classic Tray male category, which was participated in by hotel staff, Burhan Matli from Seri Pacific Hotel Kuala Lumpur won first place, taking home a cash prize of RM2,000, a medal and a certificate.

In the Sportive Tray male category, opened to restaurants, bars, hotels (non-waiting staff) and colleges, Pirto Hasan from Healy Mac’s Irish Pub and Restaurant won first place, winning him a cash prize of RM1,000, a medal and a certificate.

Last but not least, the Fun Tray category, opened to everyone in the theme park, Burhan Matli dominated the top spot again, coming in first place.

Apart from the race, there were also activities like an ice-carving demonstration and a live band performance to keep the crowd entertained.