Remembering the dead: Several people lying on the ground at the Esplanade in Penang as some wrap themselves in black plastic bags to symbolically represent refugees who died during their journey to Malaysia.

A GROUP of activists held a candlelight vigil at Speaker’s Square at the Esplanade in George Town to express their solidarity for human trafficking victims.

They observed a moment of silence as some of them laid on the ground wrapped in black plastic bags to represent those who had died at sea during their journey to their destinations.

They also held placards with various messages, calling for the migrants to be rescued, supported and treated with dig-nity.

James Lochhead, who represented Penang Stop Human Trafficking Campaign, said there should not be a repeat of deaths and trauma suffered by the migrants.

“The real criminals are the ruthless human traffickers. Let us also tell the Myanmar government that they have breached their duties to their citizens and to humanity.

“We welcome the initiative taken by the Thai, Indonesian and Malaysian governments to start discussions with the Myanmar government towards resolving the conflict in Rakhine state and to tackle the problem of human trafficking and people smugg-ling.

“A lasting peaceful solution to the present conflict is essential for the elimination of mass exodus leading to human trafficking whilst contributing to peace and stability in the region,” Lochhead said.

In a joint statement, the five NGOs urged the Federal and Penang governments to treat all newly arrived human trafficking survivors with respect and humanity.

“Many of those coming off the boats and swimming ashore are Rohingya refugees and asylum seekers from Rakhine State in Myanmar who face extreme violence and persecution there. Many will have suffered at the hands of human traffickers and other criminals as well.

“They should not be treated or labelled illegal immigrants or wrongdoers, as they have no choice but to try and find safety until there is lasting peace, without persecution or discrimination in their homeland,” they said in the statement. 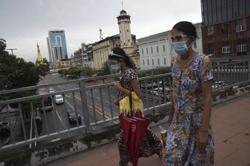 Myanmar locks down biggest city as cases soar ahead of elections