Here birdy, birdy: Children using binoculars to spot the birds during the race.

The trio of Hatta Tarmizi Dahlan, Norfaniza Omar and Fatin Damina impressed judges by spotting the most number of bird species during the event.

The Burung Hantu team from Genting Highlands only managed to spot 55 species to finish second while the Sam Veasna Centre team from Cambodia spotted 50 species of birds to finish third. He added that the event, which was held for a fourth time, ended in Genting Highlands.

“We are proud to have international participants from Indonesia, Brunei and Cambodia taking interest in this as the bird race is one of the events listed in the Visit Selangor Year 2015 and Malaysia Year of Festivals 2015 calendar,” he said.

He explained that Kuala Kubu Baru was a historic town as it was planned by the first British town planner as well as huge trees like mahogany and tembusu were planted in the town.

“After almost 84 years, these trees have grown and a variety of species of birds live on these trees.

“As a district council, we feel proud to share the elements of nature with tourists and people. 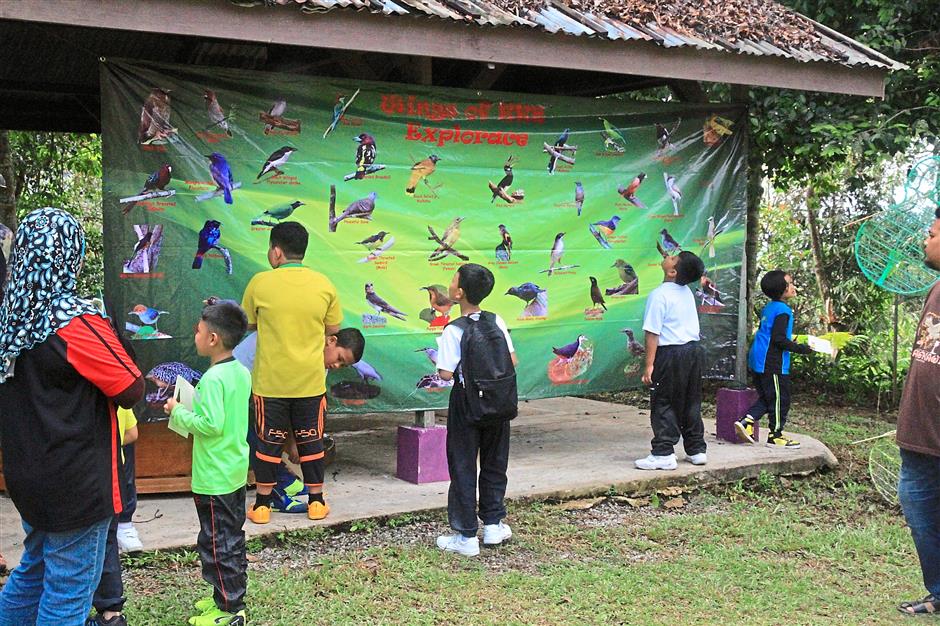 Is that the one: Children looking at the banner to identify the species of birds they spotted.

“Besides, our office is located in town itself, surrounded by huge trees and the sound of birds chirping.

“Our aim is educate the public on taking care of the environment, especially school children, through the bird-watching activities,” he said.

In the race, participants needed to complete a total of 10 checkpoints starting in Kuala Kubu Baru town and ending in Genting Highlands and attractive prizes for winners, including a binocular, a Canon DSLR camera and hotel stays were up for grabs.

Among the species of birds they identified along the route were the Great Hornbill, Rhinoceros Hornbill, Fire-tufted Barbet and Red-headed Trogon in the highlands.

Birds such as the Oriental Pied Hornbill can be found in Kuala Kubu Baru, Black Crested Bulbul in Taman Milenium, Little Cuckoo Dove in Hulu Tamu Hotsprings and Whiskered Treeswift in the Sungai Kedondong forest.