Paying attention: Gumal giving a talk on the environment after the run.

KUCHING: A recent run by Wildlife Conservation Society (WCS) offered hope to the orang utans, highlighting human destructiveness upon our cousins in the jungle.

After a 7km run through Kuching, participants were presented with the facts of orang utan survival.

Runners, some still exhausted, were told that for every orangutan seen in captivity, six others would have died along the way. This was a unique event — to say the least — by WCS, teaming up with the O-Run-Utan Running Club and Swinburne University of Technology, Sarawak Campus.

“Orang utans only give birth once every eight years. They reach sexual maturity between eight and 15 years old. With a lifespan of 30-35 years, most orang utans only have three or four babies in their life time,” WCS Malaysia director Dr Melvin Gumal said.

Once widespread across Asia over 12,500 years ago, orang utans now are only found in the tropical rainforests of Sumatra and Borneo. 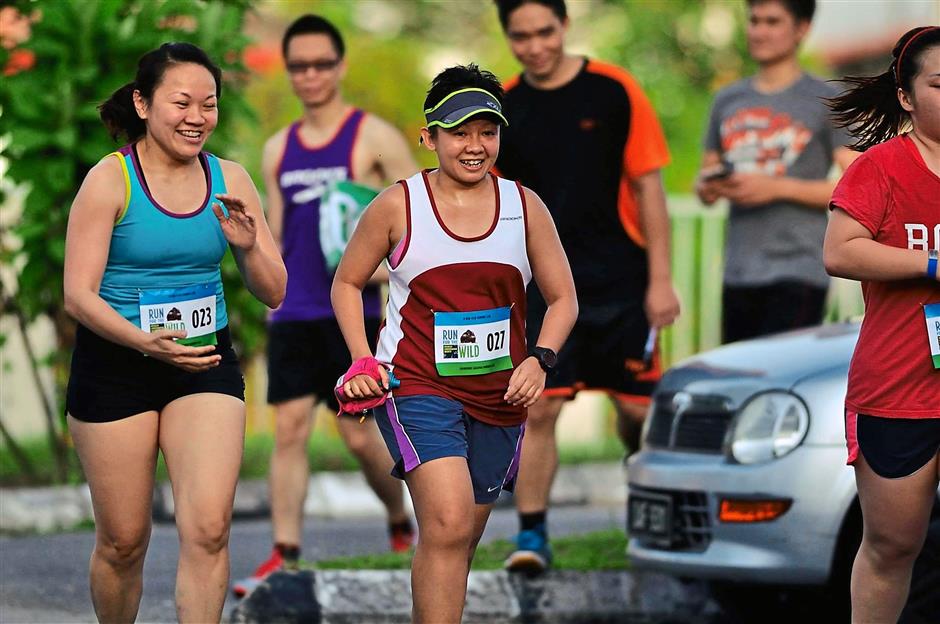 For a good cause: Participants of the run, organised by Wildlife Conservation Society, in Kuching.

Hunting and habitat lost due to human activities are reasons for the dwindling numbers of the great tropical apes. Today, there are no more than a few thousand orang utans in Sarawak’s jungles.

The WCS events were aimed at raising awareness among groups of people whom might not usually be exposed to conservation issues.

The run here, could lead to larger events down the line.

“It was our first time with the run so we kept it small. This run only included the clubs’ members and this will be a trial run for us to learn how to organise a bigger event for everybody on a later date,” Gumal said.

“The O-Run-Utan Running Club is pleased to support efforts by WCS to raise this awareness that begins ‘aptly’ with us!” said its Kuching president Alexander Liew.

Gumal, recipient of the 2014 Whitley Award for Conservation in Ape Habitats, said orang utans were among our closest relatives, the largest primates in Asia and the largest tree-dwelling animals in the world.

“Their resemblance to humans means that they have long been the subject of local myths and legends, and anecdotes about their lives peppered the writings of early explorers and naturalists,” Gumal said.