Rookies win three of the five bodybuilding titles at stake

In jubilation: Ting holding aloft the trophy after winning the 65kg-70 kg category.

IT was a battle between the rookies and old timers at the Mr Sibu Bodybuilding Championship. In the end it was the rookies who stole the show by winning three of the five titles at stake.

The newcomers went home with the Novice title, the 70.01kg-and-above category and the Champion of the Champions title.

Competing for his very first time, Farrokh Ibtisam Ting surprised the other four contestants by winning the 65.01kg to 70kg category. Two of the contestants – Edric Jiau and Adrian Alasa – were seasoned contestants in the sport.

The other two were newcomers in Eugene Lai and Kong Kuok Wei. Second placing in the category went to Adrian Alasa while third was Kong.

Farrokh, with his chisel body of a bodybuilder, was too good for the other three qualifiers for the Champion of the Champions title. New versus old timers: (From left) Akmal, Ting and Farrokh trying to outdo each other for the Champion of the Champions title.

He grabbed the title – not bad for somebody who had hit the gym just three years ago. When met after receiving the prizes from Sing Kwong Supermarket manager John Yip on Saturday night, a beeming Farrokh, 31, said he took up the sport after being persuaded by his friends.

Working as a phlebotomy at Sibu General Hospital he said his friends are a regular at the gym. “If not for them, I will not be a bodybuilder,” he said, while admitting that he was nervous competing for the first time.

Bodybuilding has since then become his favourite past-time where he pumps iron three to four times a week now at Solid Gym.

The 65kg-and-below category and the 65.01 to 70kg categories went to seasoned campaigners in Akmal Linggi and Roger Ting Wei Ming respectively.

Sibu Bodybuilding Association president Chia Soong Cheong described the emerging of new bodybuilders as something good for the town which used to be nominated by old timers. 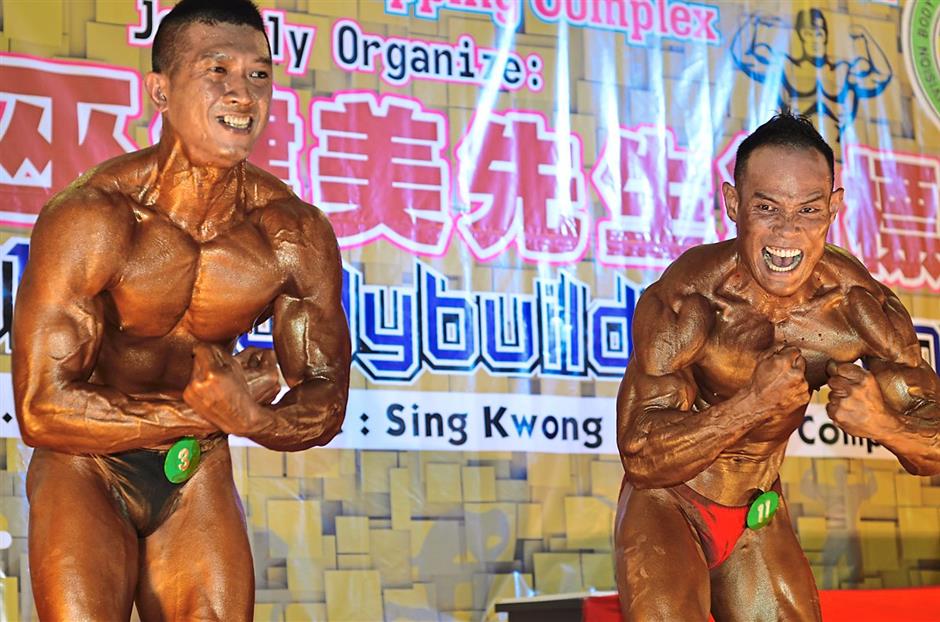 trong men: Tee (left) and Akmal in a powerful pack pose for the Champion of the champions title.

He said of the 18 contestants in the championship, six of them though lacking in experienced managed to give tough fight to the old timers.

“With many new gyms set up in the town, it is not surprising that we can have new bodybuilders comimg up the rank,” he said.

On who would be selected for the state level championship which would be held in Kuching on May 3, he said: “We will select our representatives during a meeting soon.”