Cause of floods: The embankment is badly damaged, but has yet to be fixed.

THE Kajang Municipal Council (MPKj) had to deal with fallen trees and clear up various parts of Kajang yesterday after the town was flooded following a downpour on Wednesday evening.

The heavy rain caused Sungai Jelok to overflow and the surge of water gushed out onto the streets of downtown Kajang making several roads impassable to traffic.

The parking lot next to the Kajang market as well as the commercial area nearby Jalan Jelok 3, Jalan Bukit, Jalan Tun Abdul Aziz and Jalan Semenyih were flooded with water levels reaching 0.15m.

A notice for upgrading works of the Sungai Jelok embankment by the Drainage and Irrigation Department (JPS) was seen at the site.

The signboard stated that work would be carried out from March 31 to March 30 next year. 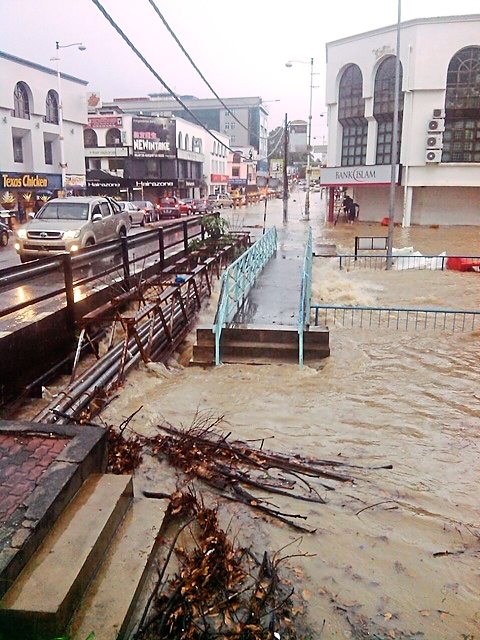 “It rained for an hour and water levels rose to ankle-length but receded in 20 minutes. One of the trees fell on a surau.

“The flood was not as serious as previous ones,” he said.

The previous floods had eroded the asphalt at the parking lot next to the market and damaged fencing at the embankment.

It had been reported that the flood mitigation project included widening and straightening Sungai Jelok, building an additional upstream water tank and an allocation of RM550,000 to address flood-related issues.

The downpour also caused minor flash floods in the Bandar Sunway vicinity with water rising to ankle-level at roads leading to Lagoon Perdana.

Minor flooding occurred at 5pm but the water had receded by about 6.30pm.

“The tree fell at about 6pm and completely blocked both sides of the road,” he said, adding that the council’s emergency response team removed the obstacle soon after.