Long wait: The abdandon housing project yet to be completed at Taman Permata Impian in Kulaijaya.

KULAIJAYA: Homebuyers are up in arms against a developer for not completing a housing project in Taman Permata Impian here.

The buyers have to fork out thousands of ringgit to service their bank loans and pay house rent for the past 13 years.

Lorry driver Ghazali Basilan, 42, expressed his dissatisfaction with the developer and said he had paid up close to 50% of his RM55,000 flat unit in the past 13 years.

“When I bought the house in 2002, they promised to handover the keys to my new home in about a year or two, but developments for the project came to a complete halt just months after purchasing it.

“About four years ago, the bank issued letters to most of buyers, stating that we would be blacklisted if the remaining outstanding balance of the loans are not paid,” he told reporters when met here recently.

Ghazali added that in 2012, the buyers approached the developer, who then promised to return their deposit and settle the issue with the bank but todate the buyers have yet to receive their compensation.

Trader Ee Yeng Han, 56, said that he purchased the flat unit in hopes of buying a home some 13 years ago but his dreams were yet to be fulfilled, as Ee still lived in a rented house in Johor Baru. 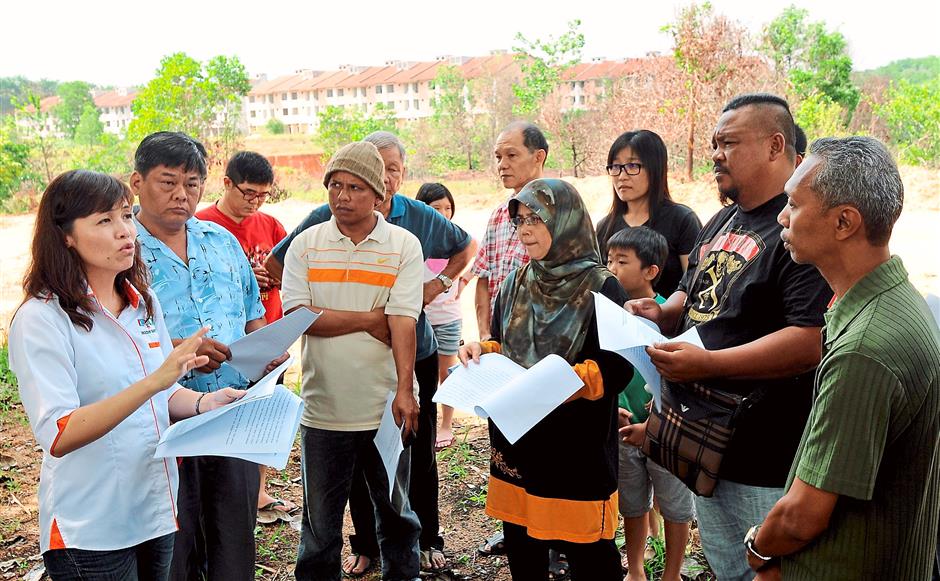 “I bought the unit under my name and obtained a 60% loan from the bank, which I have fully settled but up to today and at this age, I am still renting a house for RM1,000 monthly.

“I wanted to own a home where my wife and children can live and grow, but even after all my children have grown up and moved elsewhere, I am still stuck in a rental-home all because of this unscrupulous developer,” he added.

Kulai MP Teo Nie Ching, who organised the press conference with the buyers, said that some 224 homebuyers from the 355 flat units of which construction had been stalled since 2002

She added that the developer had alleged that the project could not be continued due to non-performing loan of the buyers following a meeting between the developer, bank and the National Housing Department (JPN) in Putrajaya on March 4.

“During the meeting, it was concluded that the developer must pay out compensation for the incomplete project while the bank has agreed to clear all legal actions taken against the buyers.

“I hope the ministry will not approve of other new projects proposed by the company until the compensation have been fully settled to the affected buyers,” she said.

Meanwhile, Kulaijaya Municipal Council (MPKu) president Abdul Rahman Salleh said that the council had been discussing with JPN for a solution to the buyers woes.

“We are in the midst of deciding whether to tender the project for completion to another developer or to order full compensations payout,” he said adding that he hoped that the case could be settled by year-end.