Now for some popcorn: (from left) Lau and Lim were among the early birds to register for the 2015 Ipoh Starwalk and receive their free movie passes.

CHRIS Ng Cheong Phee is a staunch Ipoh Starwalk supporter and did not find it troublesome to take a bus all the way from his hometown in Teluk Intan to register for the walk on the first day at The Star office.

The 63-year-old retiree said he took a bus at 7am from Teluk Intan, and arrived at the office in Ipoh before 9am to be among the first few to register.

“I did not know about the complimentary movie passes from Golden Screen Cinemas (GSC) being given out to early birds, but I am definitely pleased that I received one movie ticket after signing up.

“I have been participating in the walk for more than 10 years now,” he said after registering at the counter yesterday. Fitness instructor R. Ganesan, 55, said last year he arrived a little late for the registration, and missed the chance to get the complimentary movie pass.

“So this year I arrived at The Star office at 8.45am, and I am glad to be one of the lucky ones to get the complimentary pass. 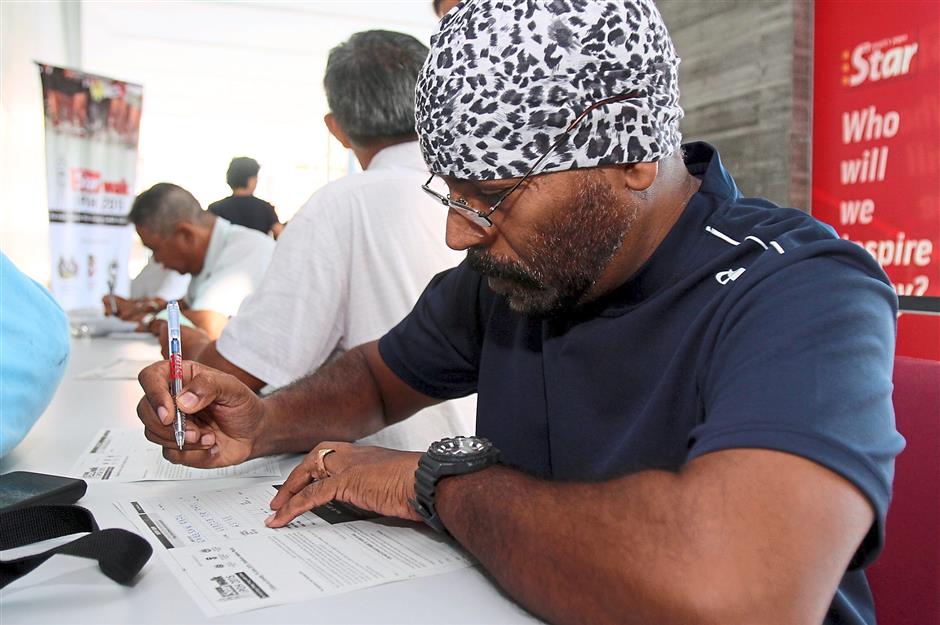 Eager to go: Ganesan filling up the 2015 Ipoh Starwalk registration form. He came early to get his movie ticket.

“I have been participating in the walk ever since it was introduced in the state in 2004, and I will continue to join the fun and exciting walk,” said Ganesan, who came all the way from Kampar.

A couple, both senior citizens, were also among the early birds who came to register.

Maggie Lim, 66, and her 72-year-old husband Thomas Lau said every day both of them would go to the Sultan Abdul Aziz Recreational Park (Polo ground) for their morning walk.

“We arrived at 8.15am, and waited until we were allowed to get inside the office to register for the walk.

“We like to exercise, and therefore we want to join in the walk that promotes a healthy lifestyle,” she added. 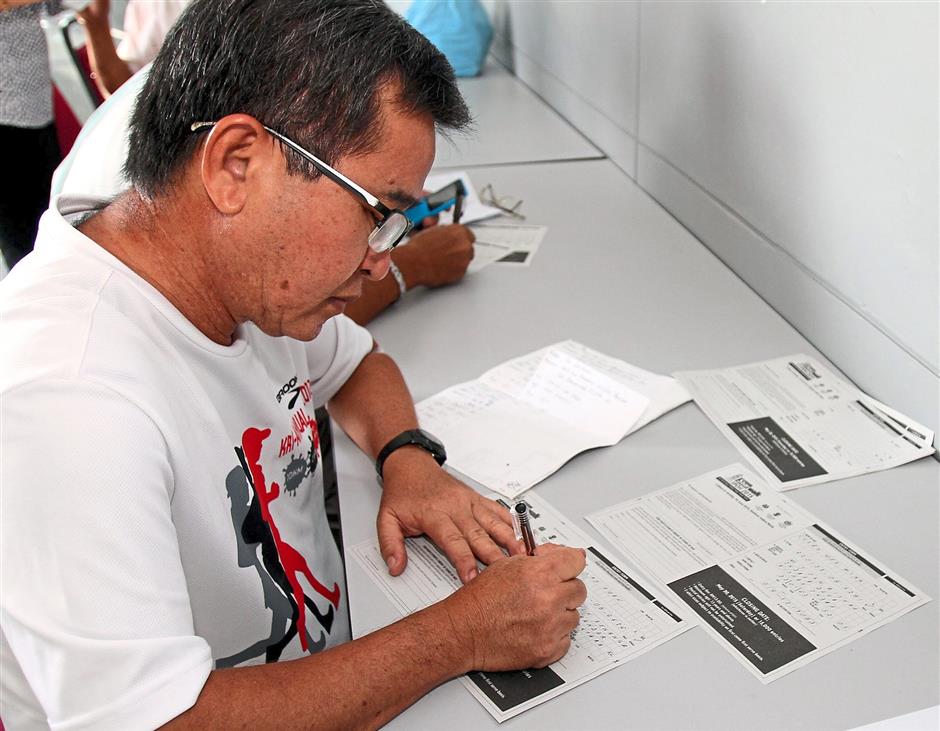 Going for the dozen: Cheah filling up twelve registration forms on behalf of his colleagues.

Another supporter was civil servant Noor Azizah Mohd Zaman, 33, who is participating in the walk for the second time.

The Customs Department staff said last year she did not manage to register early, and thus missed the chance to get the complimentary movie pass.

“This year, I made sure to come early to register for the walk, and I am glad that I am one of the lucky ones to get the pass,” she added.

Cheng Chee Fatt, 55, from Batu Gajah and who works at a factory had come early to submit registration forms for his 14 colleagues as well.

“Since they have to work, I volunteered to submit the forms on their behalf, because I have to come to the office, and register for the walk as well.

“This is the fifth time my colleagues and I are participating in the event,” said the executive.

He said he had to fill up about 12 forms for his friends and colleagues.

“I have been participating in the walk ever since its inception, as it is fun, exciting and one way to keep fit,” he added.

Currently in its 12th edition, this year’s Ipoh Starwalk will only have a non-competition 7km category, to be flagged off at Stadium Indera Mulia at 7am on June 14.

Entry fees are RM13 per person, inclusive of the Goods and Services tax.

Registration closes on May 30 or upon hitting 15,000 entries, whichever comes first.

The walk is jointly organised by Star Publications (M) Bhd and the Ipoh City Council, with the cooperation of the state government, state Education Department and Perak Athletic Association.

The platinum sponsor for the walk is YES, the gold sponsor is Indomie, while the silver sponsors are F&N, Magnum, Sanctband and Julie’s.