Touring: Ting (second from right) bringing the visitors around the cathedral.

THE people in the state are the epitome of racial and religious harmony and understanding, if the visit of members of Sarawak Islamic Information Centre (IIC) to the three main faith-based organisations in the town is anything to go by.

The 50-odd members of ICC from Kuching and Sibu, led by its chief executive officer, Zabariah Matali, spent the whole day on Saturday not only attending a meeting with the faithfuls from the Buddhist, Christian and Hindu groups but also toured the places of their respective worship.

It is not a familiar sight for Muslims to be at these places but the love of God made it possible for them to also come together.

Eta Ting, the coordinator for Association of Churches Sarawak, Sibu, said in welcoming the guests to St Mary’s Church: “Those who do not know love, do not know God.” 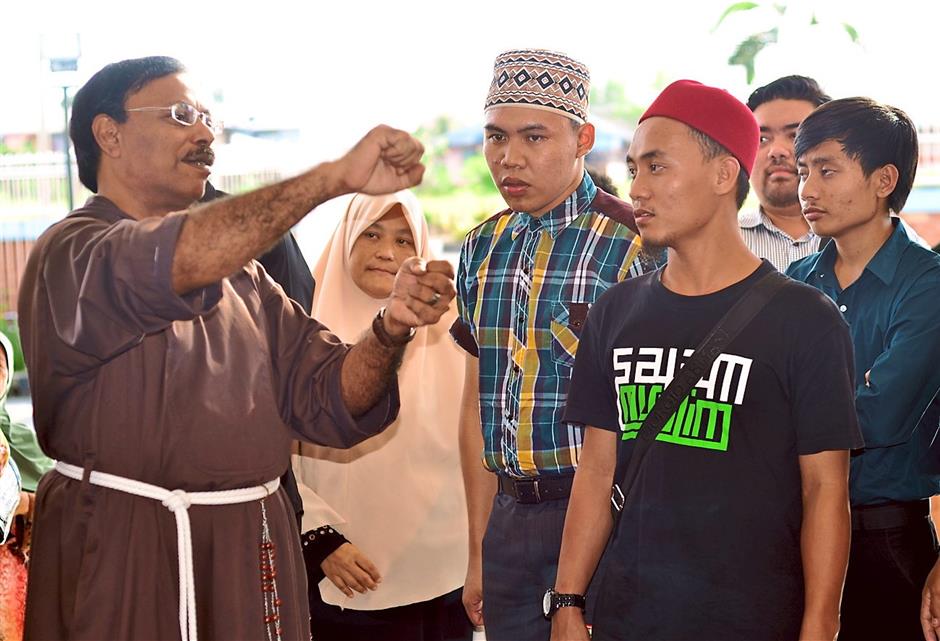 Friendly host: Father John Anandan explaining the use of Holy water to the visitors.

The Muslim group from ICC made a stop at the Sibu Buddhist Association temple, Tua Pek Kong Temple, Sri Mariamman Temple of the Hindu and St Mary’s Church.

Top leaders from the four faith-based organisations fully supported the initiative of ICC to visit them.

They also pledged to work together to cement religious harmony in the state so that religious extremism, which is spreading worldwide, will not come to the shore of the state.

From their visit, the group now has a clear understanding of the places of worship of the Christians, Buddhists and Hindus – their religious activities, history, and how their respective places are run. 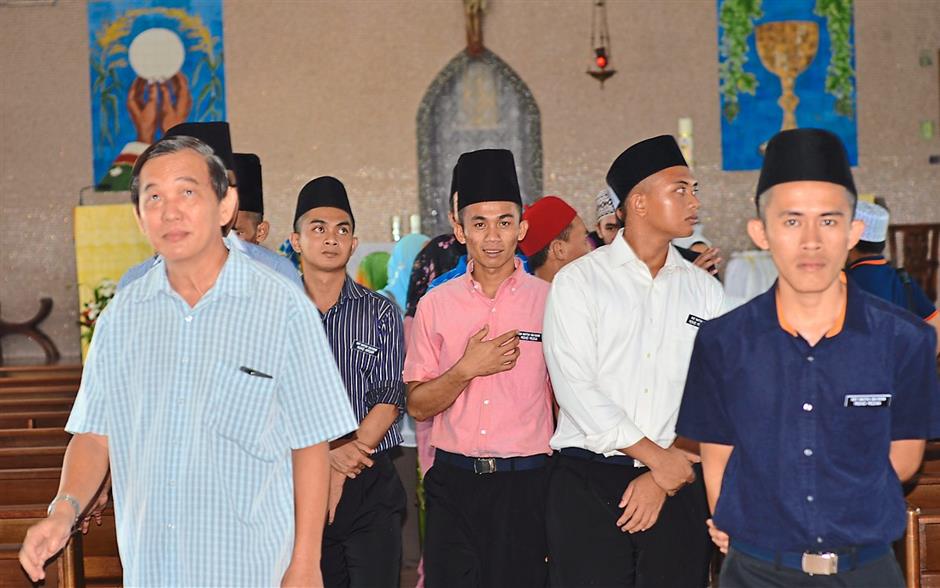 We are here: Some of the men of IIC touring the church.

At the end of the day, all parties involved helped to promote multi-religious understanding in the state and appreciation for each other.

Sibu Buddhist Association chairman Charlie Tang in his welcoming address said it was an honour for a Muslim group in ICC to visit them.

“This is the first time that we are receiving a Muslim group to our temple. It is a very good project and I hope one day we can visit a mosque also,” he said.

Tang explained to them how Buddhism spread throughout the world, starting from Sri Lanka, followed by Cambodia and Thailand first to northern China before other countries. 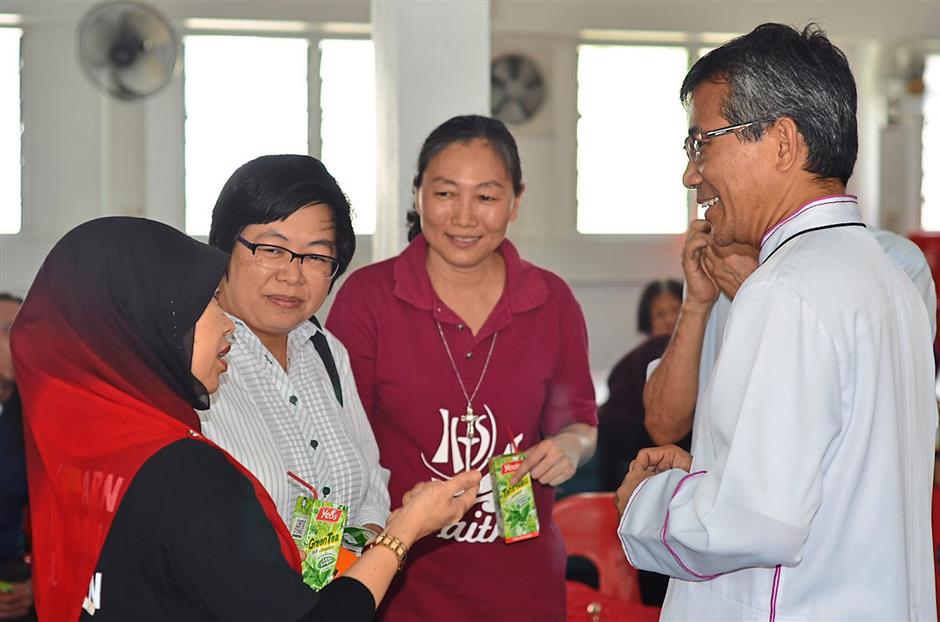 Deeper understanding: Bishop Hii and others mingling with Zabariah.

“Buddhism does not promote extremist teaching. It is about the love for God and humankind. In Sibu, our group started in 1977 by a monk from Taiwan. Our first temple was a rented shoplot at Hardin Walk before moving to our present site. Most of us are volunteers except a full-time clerk,” he said.

He also told them that they were different from Tua Pek Kong Temple as the latter is Taoism.

“It is good that we can visit each other to understand the different adat istiadat and custom of the people,” he said.

Manogaran also briefed them on the formation of the temple in 1920 and the many festivals the 500-odd Hindus in the town were also celebrating. 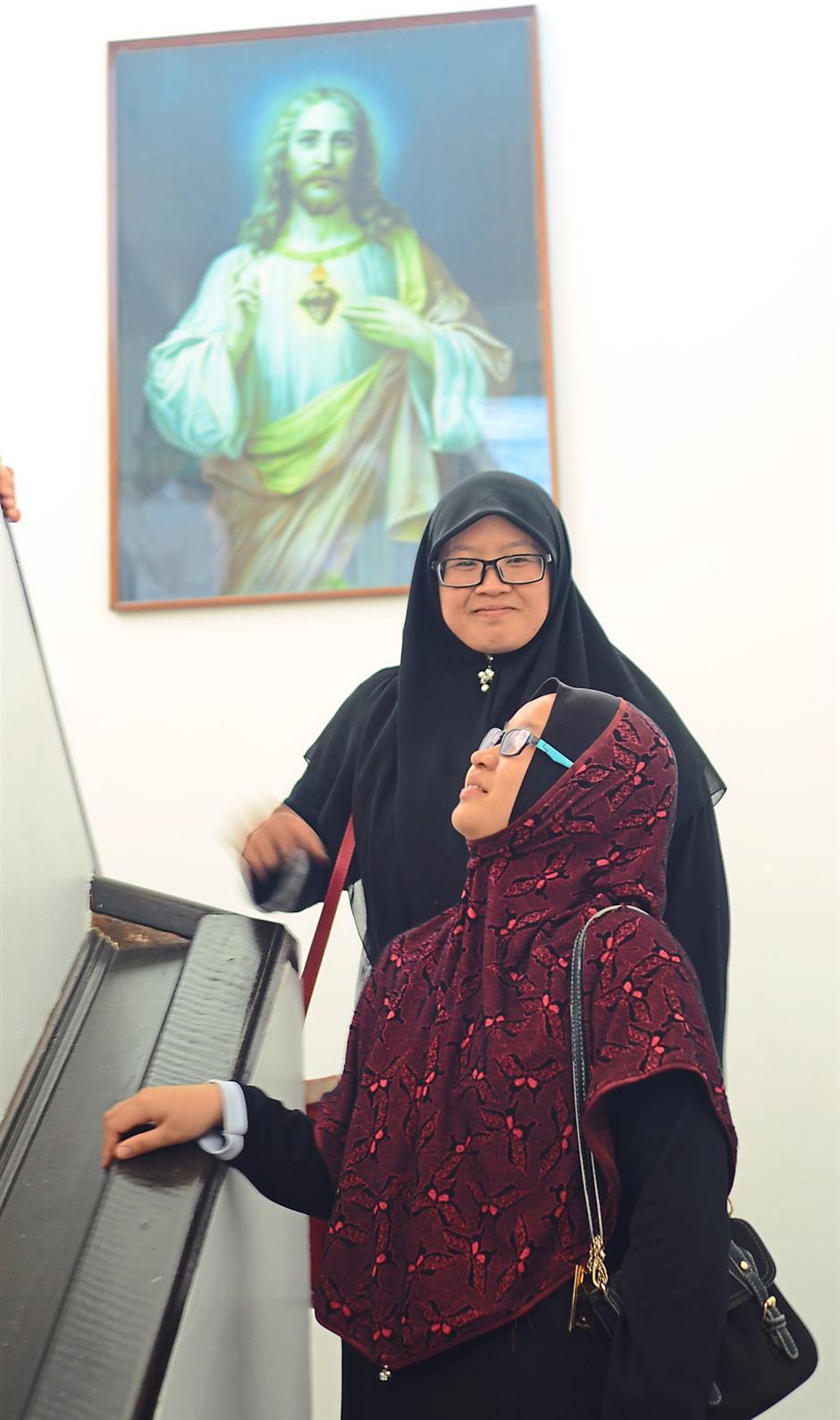 These include Pongal Festival, Thaipusam, Telugu and Deepavali. Manogaran also threw a lunch which was prepared by Nur Islamic Restaurant to the visitors at the compound of the temple.

To Reverend Father Ferdinand Vergeer of the Catholic church, the visit of the group was “a historic moment,” as he said they did not have such visits very often.

“Hopefully this visit will not be the last time. We hope that this can continue as we can bring all together to be united to face the threat posed by religious extremists. With this threat, such visit is more needed now than before. It is a good thing to have Muslim friends as it takes away our fears and be bulldozed by extreme elements,” he added.

Father Ferdinand described the visit by the group as an important one as it helped to alleviate the misunderstanding over the use of the word “Allah” in the Malay version of the Bible.

“Our gathering today helps to lessen the fears that might have existed. In future it is good that we can discuss problems with one another so that we can uphold the friendship and harmony for the generations to come,” he said.

Zabariah said the visitations to the faith-based organisations here served as an important bridge to foster closer ties, friendship and understanding among them.

The many different ethnic groups in the state with different religious background, she said, made their visit important. 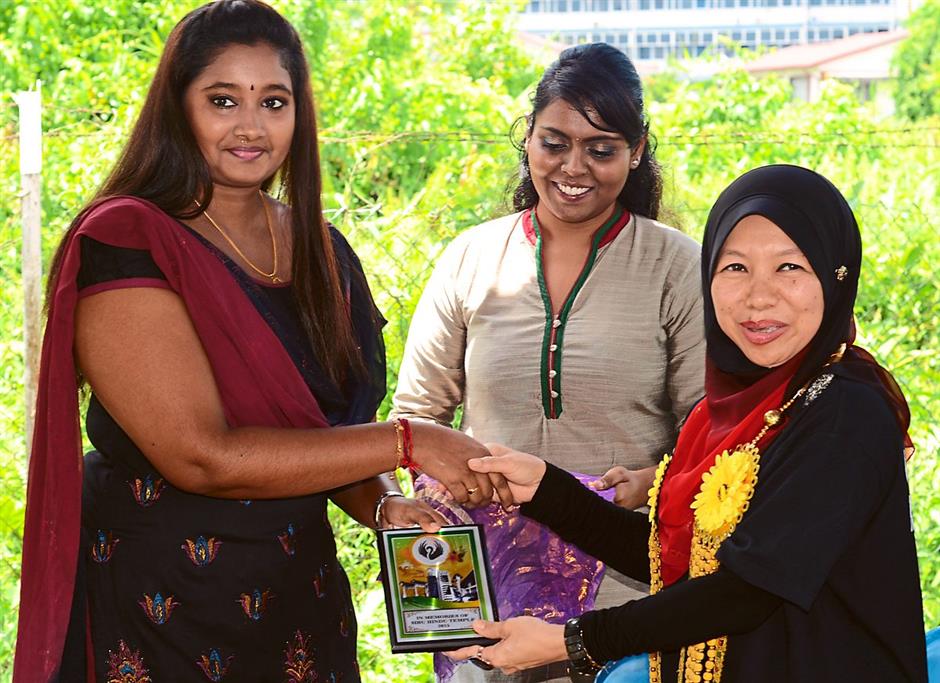 Thanks for coming: A representative of Sri Mariammam Temple presenting a souvenir to Zabariah.

“A lot of them had said this was the first time that we visited them. I also hope we can visit each other more often so that we can come closer and understand each other better. This is something unique in Sarawak which you can’t find it anywhere,” she concluded.

Their visit coincided with a Multi-Religious Forum on Faiths and Belief System yesterday at University College of Technology Sarawak.

ICC head of programme Mohamad Zakaria Ashmat said since their formation in 2008, they had been organising activities and events that promoted multi-religious understanding and appreciation among the various faith-based organisations in the state.

“One such activity we have been organising is “Understanding other religions”. The activity aims to create a better understanding of the various faiths and traditions in Sarawak. As part of the activity, a visit to places of worship is imperative,” he added.

On the forum, he said, it was a platform for them to discuss with people of different faiths on current issues and concerns.

The forum was to allow them to strengthen the social bonding among the different faiths and communities so as to build a more cohesive and resilient society.