Ready for the day: DBKL staff preparing cleaning materials needed for the clean-up.

EFFECTIVE management of rubbish starts with the people as the community shoulders the responsibility of keeping an area clean, Kuala Lumpur mayor Datuk Seri Ahmad Phesal Talib said at a massive gotong-royong initiative to clean up Bukit Bintang.

He said the community should watch out for litterbugs, even going to the extent of questioning them if they are caught in the act.

Cleanliness, he stressed, was crucial for Bukit Bintang to maintain its status as the nation’s most famous shopping hub.

“For the love of the city, attitudes must change,” he said.

The Bukit Bintang community has been coming together to clean up the area regularly and the most recent effort over the weekend marked the 29th gotong-royong activity.

Ahmad Phesal was the guest-of-honour at the event, which also saw students and pupils from five schools in the vicinity volunteering for the cause. 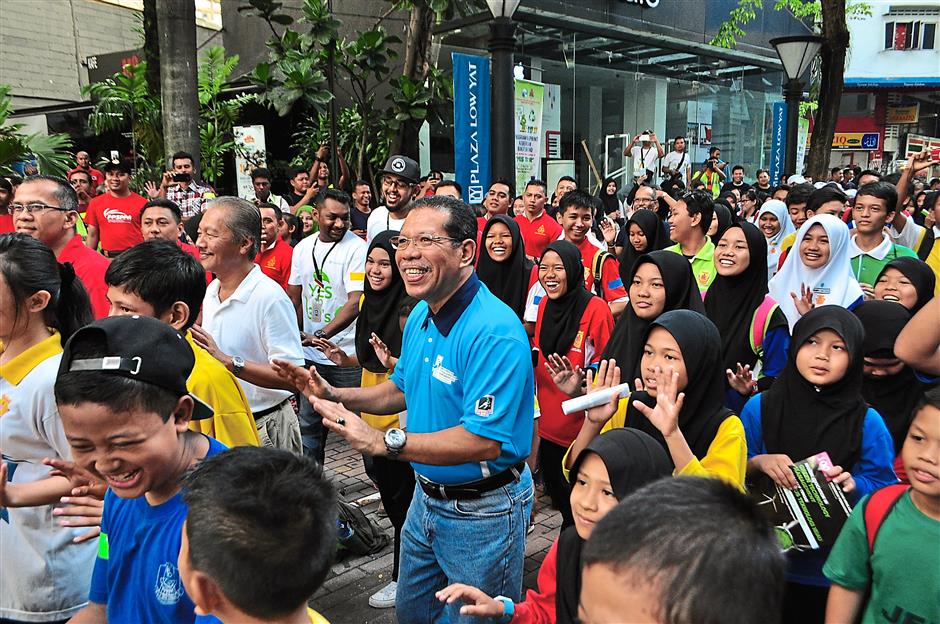 Healthy start: Ahmad Phesal (in blue) joining participants in an aerobic session before the clean-up began.

The 1,000-strong crowd kicked off the day with an aerobics session before beginning a thorough clean-up of Plaza Low Yat Boulevard and its immediate surroundings.

The figure, he said was an underestimation as it was only based on the amount of garbage collected by the four compactors that serviced the area twice a day.

“We are introducing the 3R programme to encourage the community to reduce, reuse and recycle.

“We have deployed our Eco Rangers — mobile units that go from shop to shop and house to house, for this purpose. We have also added a pick-up truck, a lorry and a dedicated high-pressure water hose to clear clogged drains,” said Mohd Zain.

He added that under Alam Flora’s ‘Cari Sampah’ programme, a tricycle patrolled the streets dedicated to collecting litter.

However, Mohd Zain felt the problem would not go away just by increasing collection rounds and providing more equipment.

“People have to learn to reduce their waste. Recycling is one way they can do this,” he explained. 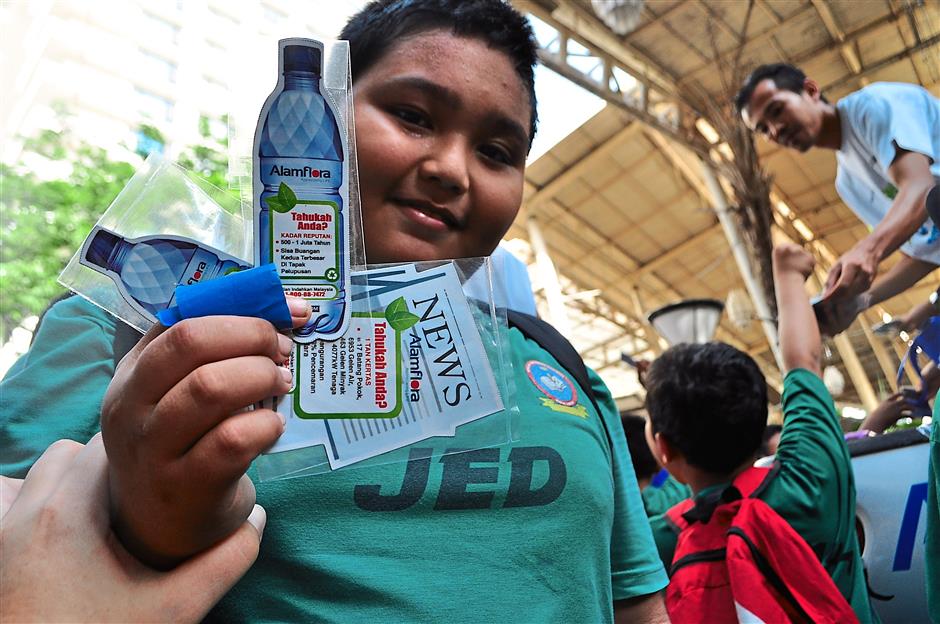 Teach the young: A pupil showing the stickers given by Alam Flora’s Eco Rangers who are advocating the
importance of reduce, reuse and recycle.

Meanwhile, The Federal Kuala Lumpur general manager and BBCEC president Simon Leong said the search for solutions had begun as early as 2001.

“We started by searching for the root cause and by 2012, the clealiness blueprint identified three main areas of concern,” he said.

He explained that a large part of the problem stemmed from petty traders who did not have a proper garbage disposal system.

Another reason was that many of the eateries did not have proper grease traps, which DBKL addressed by making it one of the conditions for licence renewal.

“The frequency of rubbish collection was increased in 2008. Before that, we only collected in the morning. Now, we collect at night as well because Bukit Bintang never sleeps,” Mohd Zain said.

The situation has improved but some are still not satisfied.

Masseur and reflexologist Simon Chen, who has a business in Changkat Raja Chulan, said something should be done about the smell and the cleanliness of the back lanes.

“The restaurant workers throw food waste into the bins behind my shop. By mid-day, it becomes smelly,” Chen said.

Chen said he had complained on several occasions, sending as many as 10 letters to DBKL but nothing has been done.