The polystyrene beads would cover the surface of the septic tank to prevent mosquitoes from laying eggs in the water.

THE Ipoh City Council has begun a pilot programme to put polystyrene beads into individual septic tanks at homes in its bid to control and prevent Aedes mosquitoes from breeding.

Ipoh City Council secretary Mohd Zakuan Zakaria said Cherry Park and Rapat Setia were two areas identified for these septic tanks and that they would first implement this in Cherry Park.

“There are about 900 houses with these septic tanks in the two housing estates.

“About RM19,800 has been allocated for this exercise. We will re-evaluate its effectiveness and issues that may arise before expanding its usage to other areas,” he said after a gotong-royong in Cherry Park.

Mohd Zakuan, however, said that not all septic tanks were suitable for the beads.

“We will conduct checks on the tanks upon getting permission from the house owners. 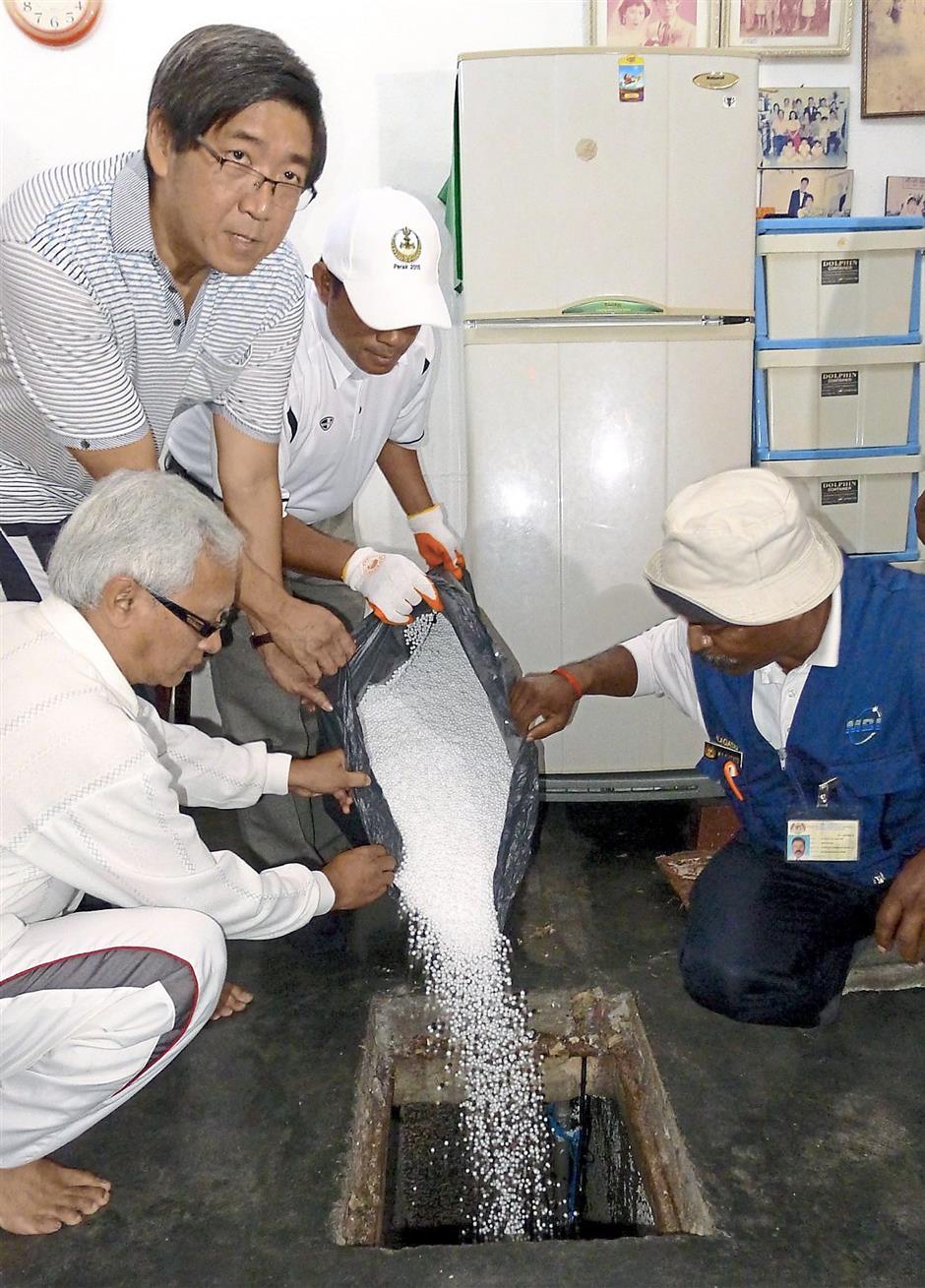 In they go: Mohd Zakuan Zakaria (third from left) pouring the polystyrene beads into a septic tank at a house in Cherry Park

“If found suitable, then we will put the beads in,” he said, adding that about 25 households in Cherry Park have signed an understanding to allow the exercise to be conducted.

He noted that the beads would cover the surface of a septic tank to prevent mosquitoes from laying eggs in the water.

He said that a survey conducted by the city council found that septic tanks were also breeding grounds.

Meanwhile, city councillor Tony Khoo said that people should be more aware of the dangers posed by Aedes mosquitoes.

He said that awareness of dengue disease was a key factor in fighting the outbreak.

“With awareness, people would be more pro-active and keep their premises clean.

“This would lower the number of dengue cases significantly,” he said during a gotong-royong organised by the city council in Menglembu.

“People should not depend solely on the city council to keep their areas clean. They must also be responsible and play their role to keep the dengue threat in check,” said Khoo.

About 50 people from Menglembu took part in the gotong-royong and helped to clean up the area near the community hall.

Armed with rakes, wheelbarrows and plastic bags, the volunteers, along with council workers, swept and picked up rubbish within the area.

Khoo said the number of dengue cases in the Kinta Valley had increased this year compared to last year.

“As of March, there have been about 3,500 cases. The numbers have almost doubled compared to last year within the same period.

“The city council has taken note of it and is going all out to combat the problem,” he said.

Khoo said Menglembu was one of the areas in the Kinta Valley to have a low number of cases.

“This year alone, there are six cases in Menglembu. Another area that has a low number of cases is Pasir Pinji, with five.

“We want to ensure that the number does not increase and hopefully we can achieve zero cases next year,” he said.

“Today, we have volunteers from Rela, Rukun Tetangga and the Menglembu new village development and security committee taking part in the gotong-royong.

“We really hope the villagers would take part as well, and not just depend on the council workers to keep the environment clean,” he said.