Solution: Hasni (thrid from left) at the launch of the inter-varsity engineering leadership programme 2015 at Universiti Teknologi Malaysia Skudai Campus.

JOHOR BARU: Heavy vehicles should be banned from using the Causeway to reduce traffic congestion at the link.

He said banning heavy vehicles from using the Causeway would facilitate the construction of the proposed rapid transit system (RTS) linking Johor Baru and Singapore.

“His Majesty (Sultan Ibrahim Ibni Sultan Iskandar) had brought the issue to the state government’s attention and we will submit the proposal to the Transport Ministry,” Hasni told reporters after launching the inter-varsity engineering leadership programme 2015 at Universiti Teknologi Malaysia Skudai Campus here.

He said although the Causeway had been designated as the route for lorries from Malaysia and Thailand under the Asean Protocol 1, Malaysia and Singapore could designate the Second Link Crossing instead.

“This will help improve connectivity and accessibility at the Causeway and will benefit Johor and Singapore,” said Hasni.

Johor and the republic are also connected via the Second Link, a dual three-lane carriageway linking Tanjung Kupang to Tuas in Singapore, the bridge is about 1.9km long.

Separately, he said Johor would gazette 15 water catchment areas within water dams statewide as prohibited areas this year to prevent freshwater resources from being polluted or contaminated by economic activities.

Hasni said that the factory which had caused an oil spill in Sungai Johor had been directed to stop operations pending tests by the Chemistry Department.

“We will take appropriate action against the owner including hauling him to court for negligence,” he said.

The oil spill which occurred on Thursday was believed to have been caused by the burning of tyres.

The spill forced the Semangar and Sungai Johor water treatment plants to be closed affecting some 500,000 residents in parts of Nusajaya, Kulaijaya, Tiram and here. Water supply to the affected areas was restored on Saturday. 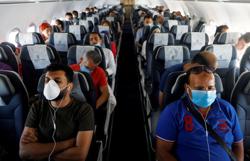 Risk of inflight spread of COVID-19 'very low', not zero - WHO