Police force rewards its own

Well done: Mohd Mokhtar (second from left) presenting an award to Puvanehsan (far left) for his excellent result in UPSR during the presentation ceremony.

JOHOR BARU: It was truly a proud moment for police officer Sgt C. Ananthan as his two sons were not only given excellence awards for their studies but both also hoped to follow their father’s footsteps to join the police force.

The brothers Thanes, 16, and Puvanehsan, 13, who were all smiles, said they always looked up to Sgt Ananthan as their idol and respected his life values.

“Although he can be strict especially when it comes to self-discipline, he has always been there for us, showered us with plenty of love and taught us right from wrong,” said Thanes, who attained 8As and 1B in his PT3 examinations last year.

The brothers, who expressed their ambition to become policemen, were among 11 children of the Indian policemen in Johor who were presented with awards for their excellent performance in UPSR, PT3 and SPM examinations last year. 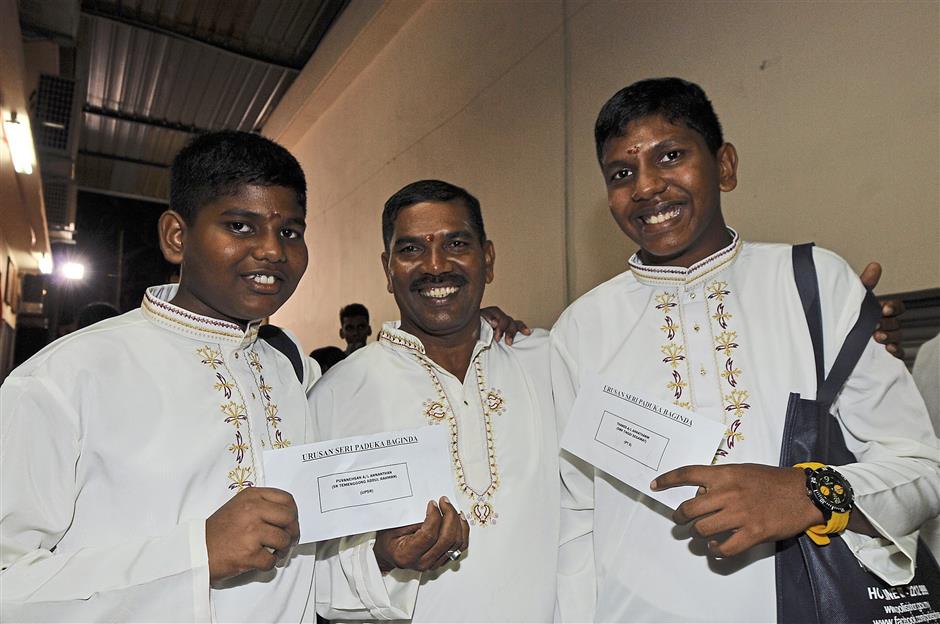 Hard work pays off: Ananthan (middle) with his sons Thanes (right) and Puvanehsan (left) who received excellence awards for the PT3 and UPSR examinations at the Arulmigu Maha Mariamman Devasthanam Temple.

“I cannot not be more proud of my sons and I am touched that they want to become police officers like me,” said Sgt Ananthan.

Another high-achiever R. Ashwiny, 18, said that her policeman father M. Rajenthiran, 55, had always been her pillar of strength and encouraged her to excel regardless of obstacles that came her way.

“Studying in Singapore was no walk in the park, but the love and support that I received from my parents especially my father was what pulled me through.

“Although I constantly worry about his safety as a policeman, I admire him as a person as my father is honest, humble and brave. I hope to take care of him,” said the O-Level leaver, who scored 4As and 4Bs recently.

Some 200 Indian police personnel and their family members turned up at Arulmigu Maha Mariamman Devasthanam Temple here for a special two-hour prayer for safety ceremony in conjunction with the 208th Police Day celebrations before the ceremony.

Johor police chief Comm Datuk Mohd Mokhtar Mohd Shariff, who attended the ceremony to show his support, assured members of the public that the police force would stay committed to their duties to ensure the safety of the community.

“Crime prevention is all about shared responsibility, in line with our theme this year ‘police and society are inseparable’.

“We can and shall reduce crime and ensure the maintenance of law and order statewide, as proven in our track record of a reduction in crime rates for the past seven year,” he said during his speech here on Friday night.