Eyesore: The rubbish strewn over a 3km stretch of the beach near the hawker stalls in Kuala Perlis.

THE Consumers Association of Penang (CAP) is crying foul over the longstanding problem of waste pollution at the coastal areas in Kuala Perlis.

It has urged the Perlis government and the Kangar Municipal Council (MPK) to take immediate action over the sorry state of the coastal areas.

CAP president S.M. Mohamed Idris said in a statement that a survey conducted by CAP showed that wastes such as plastic, polystyrene, paper, tin and wood were strewn over a 3km stretch of the beach near the hawker stalls.

“The drains behind the stalls in the area are stagnant with sullage and food waste which have caused malodour.

“We also detected a location at the waterfront which is being used for burning garbage.

“The grates in the area are also rusty and some are nearly broken. Even the drain is not covered up, which may be a hazard to the public especially at night,” he said.

Mohd Idris urged the MPK to take stringent legal action against those responsible.

He added that if no effective measures were carried out, the entire coastal area in Kuala Perlis would be contaminated. 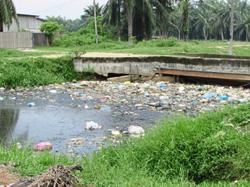