Unable to eat by herself: Lim (left) feeding Low through a tube. The 13-year-old girl has been unable to eat the natural way since she was five as her lung could get infected.

One of them is Low Ann Ning, who has never tasted food since she was five years old. She is 13 this year.

The girl is suffering from cerebral palsy and has to lie on her back all the time. She can sit only for a while with support. She cannot walk, talk or even eat.

Her mother Lim Li Ean, 43, said Low had to be fed liquid through a feeding tube inserted into her stomach as she could develop lung infection if she ate.

Lim is unable to work as she has to take care of Low. 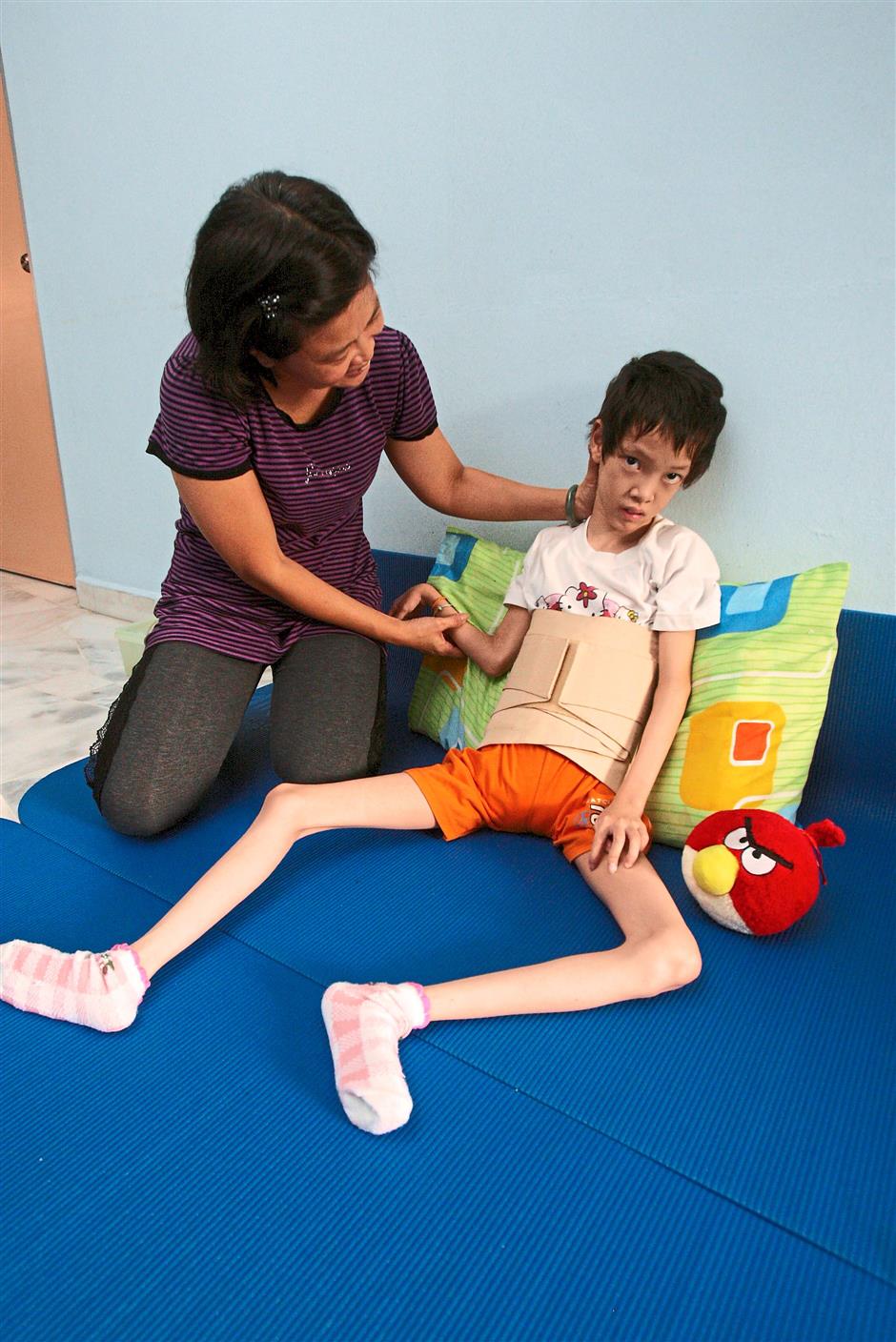 Hanging in there: Xiao Pei showing the medical records since she was first diagnosed with Hodgkin’s lymphoma four years ago. She hopes to continue her studies, after she recovers from the rare disease.

“I tried working for one month but Low’s condition worsened so much in that short time. Other people were not used to taking care of her. At the end of that one month, Low had bad spasms and her private part bled,” she said.

Lim takes Low to a government hospital four times a week for physiotherapy and occupational therapy sessions. She also drives her daughter to Seremban once a week for a Japanese rehabilitative programme called Dohsa-hou that guides children with cerebral palsy on their motor activity.

“These visits are necessary so that Low’s condition does not worsen,” she said. She wraps a back support belt around her daughter’s tiny waist because her backbone has started to bend.

Lim does not get financial support from her estranged husband, who takes care of their two elder daughters.

Lim’s household expenses are about RM2,000 a month, inclusive of Low’s medical expenses and rental of a house in Kajang.

Another ill child is a girl diagnosed with Hodgkin’s lymphoma (a cancer of the blood).

Smiles have faded from the face of the once bubbly Loh Xiao Pei, 18, who has lost half of her weight due to the disease discovered four years ago. She was once 48kg, but now is only 24kg.

Xiao Pei said she woke up one morning and realised there was a growth on her neck. That was the start of her long ordeal undergoing multiple chemotherapy sessions.

She underwent stem cell transplant last year, causing her to lose weight dramatically. The sight of her skeletal frame is heart-wrenching but she is determined to continue fighting.

She wonders if she has the strength to undergo chemotherapy sessions at a government hospital for the next two years, twice a month.

Her mother, Wong Choy Mui, 50, had to quit her job as a coffeeshop helper – a job she had managed to keep to raise her six children since her husband passed away 16 years ago – to look after Loh.

The family depends heavily on the family’s eldest daughter Loh Lee Si, 29, who works in Singapore.

Lee Si, Xiao Pei’s stepsister, makes it a point to come home at least once a month. Unfortunately, their brothers earn a meagre income.

They keep expenditure low by living with two aunts in their father’s family house in Dengkil.

“We pray hard for Xiao Pei’s speedy recovery but our resources are limited. Even though the fees charged by the government hospital is minimal, we still struggle to pay the bills. The last bill was about RM1,000, we had to scrape the bottom of the barrel to make the payment,” Lee Si said.

She said they were worried about funds because Xiao Pei could develop unforeseen conditions that needed medical attention.

The last round of hospitalisation which stretched up to three weeks, was to treat severe skin allergies after Xiao Pei had to use medicated patches to ease her pain.

Teary-eyed, Wong did not speak much but stressed that it was not taxing nor tiring to take care of her daughter.

Xiao Pei hopes to continue with her studies soon, but her eyes showed a sense of uncertainty.

She had wanted to take a business administration course to support her mother. “I think I can make money by starting a business, to take care of my mother,” she said, adding that she often felt giddy and breathless.

Rumah Caring founder Wendy Yap said the association was struggling financially to build a place for the old folks’ home now that they had been ordered to evict the current premises.

The association had organised several fund-raising events but had not achieved the amount needed.

It has, nevertheless, managed to buy a land offered to them at a discount and proceeded with plans for the project. Progressive work will be carried out once they receive approval from a council.

If you would like to help the children, please visit the home at Persatuan Rumah Caring Kajang Selangor, 11, Jalan Muhibbah 7, Taman Muhibbah, Kajang, Selangor or call Yap at 012-238 0043 for details.