By BAVANI M. And VIJENTHI NAIR

REGULAR taxi commuters in the city are crying foul over the new rates, saying that it is going to really hit them where it hurts most — in the pocket!

“It is shocking that the Government is permitting the increase now, when the prices of most things are going up and GST (goods and services tax) taking place next month,” said R. Shantini.

The disgruntled 26-year-old who just landed a job with an advertising agency and takes taxis regularly to work, said, “It is a bad hit.”

“I cannot afford a car yet, and I try to commute by LRT as much as I can. But when the area that I need to go to has no LRT service, I rely on taxis.

Another taxi commuter who identified herself as May Lee, also lamented that the hike was way too high. May Lee, who is a regular MyTeksi user, said the increase would be too painful to bear.

“I do not mind the surcharge imposed by the service as I am guaranteed a taxi and it is safe. But the more than 40% increase in cab fare is definitely going to burn a big hole in my pocket,” she said.

“Although I understand the fares should be adjusted because it has been some time since it was last done, a 15% increase would have been more bearable.

“Also, what is the justification for such a high increase when crude oil prices are now at its lowest?

“The timing of the increase is also inconvenient as GST will take place on April 1. How much more expenses can the average person bear, especially with the current cost of living?” he questioned.

Meanwhile, veteran cab driver Rahim Kechik said the fare increase looked good for the drivers on paper but he foresaw a reduction in the number of people using taxis. 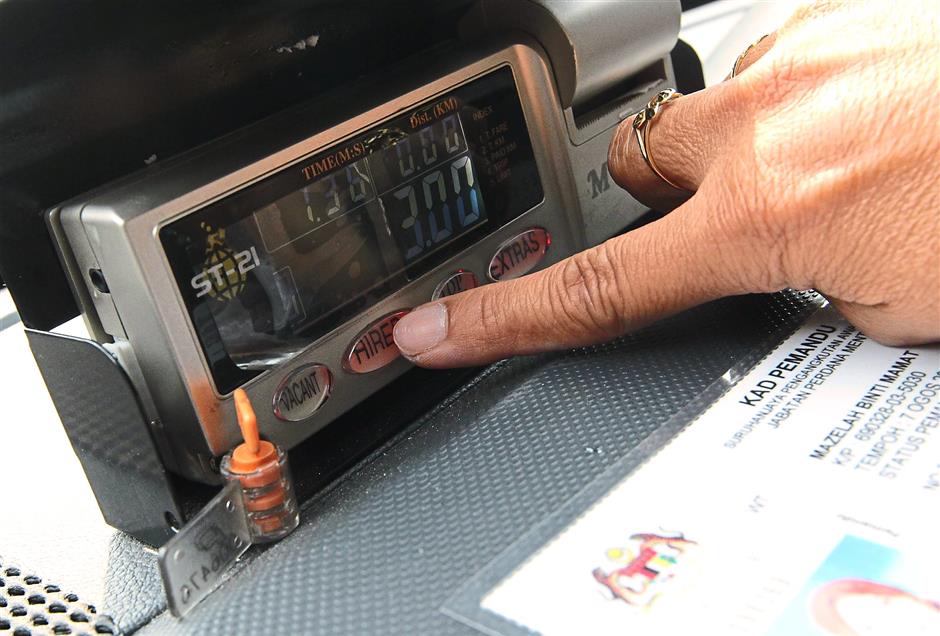 The 60-year-old taxi driver, who has been driving a taxi for more than 30 years, said he anticipated fewer passengers in the following weeks once the new rates are implemented.

“Based on my experience, I certainly foresee a drop in passengers,” he said.

“Even a 50sen increment will affect us before the public get used to the new fare,” Rahim noted.

On the other hand, several taxi drivers operating in front of a bus stop near Suria KLCC said the increase would do nothing for them.

“I still earn more by not using the meter. It is the only way to survive in Kuala Lumpur. You either drive a taxi or you sell nasi lemak,” said a cabbie who declined to be identified.

In an immediate reaction, MyTeksi Sdn Bhd general manager Jaygan Fu said he did not expect to see any difference in passenger volume following the rise in cab fares.

“We do not foresee a change, but it may change the way people use taxis. For example, they may optimise their journeys,” he said.

“But taxis remain the most convenient and personalised mode of public transport.

“Moreover, at MyTeksi, we constantly have campaigns that make taking taxis affordable for passengers,” he said.

In a statement, Prasarana Malaysia Bhd said, “Ridership of trains and buses is expected to remain strong with the increase in taxi fares.”

Flag-down rates for budget taxis nationwide will remain at RM3, but the distance and time rates will be revised.

The TEKSIM cabs, which are gold Proton Exora, will see flag-down rates upped to RM4, with 30sen to be charged per 200m.

Rahim questioned the rationale for increasing the flag-down rate for Teksi 1 Malaysia (TEKSIM) to RM4. The current flag-down rates for budget taxis are RM3.

“Both are the same taxis. Same size, same model but why are the rates different?” he asked.

The new taxi rates will take effect immediately. Taxi drivers, however, will have to recalibrate their meters in order to charge the new rates.

The last review on public transportation fares was done in 2009.

The fares of airport and executive taxis remain unchanged.