Exhibition an effort to bring together street and academic art

A nation’s prayer: Artists (from left) Caryn Koh Hooi San, Aleff Ahmad, and Sliz posing in front of their artistic collaboration and centrepiece of ‘The End’ exhibition — a tribute to the MH370 tragedy. The painting reflects the ancient Japanese Senbazuru legend, symbolising hope of a wish granted to anyone who folds 1,001 paper cranes. The girl in prayer signifies Malaysians and their prayer for the families who have suffered from the loss.

INSPIRED by what Alice might have felt when plunging down the rabbit hole into the strange yonder, an art exhibition titled ‘The End’ begs the start of another adventure in the never-ending cycle of artistic creation.

The exhibition at Publika’s 321 Studio is curated by a member of “The Secret Hide-Out Collective” artist W.M. Habil, who is better known by his street name, Sliz.

The collective was formed from a casual coming together of several like-minded artists known mostly for their street art that includes their involvement with UrbanScapes and a live graffiti mural painting event.

As they prepare to open up their collective to other artists, the exhibition aims to narrow the gap that has been wedged between academic and self-taught art.

“Our collective really took off when we met Andrew T. Crum, and without knowing it the group became bigger and more like a legitimate art collective.

“The show is to celebrate how we came to be what we are today because of how we were before, as well as to encourage other artists from any discipline to join in because our artistic personal development grows more rapidly through art collaborations.

“So it was not just about bringing street art into galleries, but also about bringing gallery artists to the streets to break barriers that define what street and academic art is. “On both sides, self-taught and academic artists are struggling but the dynamics have changed, so we want other artists to recognise that they can also host gallery exhibitions themselves,” he said.

Bold strokes on concrete walls, detailed ethereal paintings on wood and stylised cardboard sculptures are but a few of the pieces exhibited that subtly convey originality associated with their street feel.

At the centre of it all is an acrylic-on-canvas tribute to the MH370 tragedy that beset Malaysia last year, composed by budding artist Caryn Koh Hooi San in collaboration with Sliz, Alena Murang and Aleff Ahmad.

The sombre realism yet delicately tranquil element to the piece draws on the duality of emotion, a sentiment that permeated throughout the exhibition.

“The origami cranes are painted in the colours of Malaysia Airlines. At the same time they are a symbol of hope, following the ancient Japanese Senbazuru legend of a wish granted to anyone who folds 1,001 paper cranes.

“The raw unfinished cranes almost clouded over by paint represent the mystery we have sought to resolve, just as the girl signifies that we as a nation are praying for the families in their time of grief,” Koh said.

In another collaboration, this time with her best friend Aiman Ariffin, Koh’s acrylic-on-plywood piece titled ‘Nirvana’ uses muted colours that juxtapose the dream-like scene of a man crouched in foetal position, surrounded by butterflies.

Stripped bare of his clothes that is symbolic of innocence, freedom and ultimate happiness within his dream state, the origami butterflies represent beauty and escapism.

Again she uses contrasts as the butterflies are made with office documents to represent a reminder of the responsibilities that are ever-present on the edges that border reality.

Next stop for the Secret Hide-Out Collective will be the Hin Bus Depot art gallery in Penang, as well as work with the Cracko Art Group in Sabah.

The End exhibition at Publika Solaris Dutamas’ 321 Studio ends today with musical performances by local talents and a celebration that begins from 8pm until late.

Open to the public, admission is free. 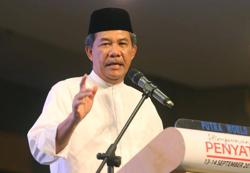