We will talk: Ahmad Husni (third from right) taking a look at the pomelos on a tree during the Chinese New Year open house in Tambun recently.

Ahmad Husni said he would look into the matter as he wants to see the issue settled amicably.

He said the land was ideal for growing pomelos.

“The pomelo is unique in this area.

“The environment, the water from the hills and the soil are suitable for growing the fruit,” Ahmad Husni said after attending a Chinese New Year open house organised by pomelo growers in Tambun recently.

“Housing developments can be done elsewhere,” he added. Arash Kukuh Enterprise Sdn Bhd was planning to develop an affordable housing scheme on a plot of land measuring some 14.1ha in size there.

It was reported in MetroPerak earlier this year that a group of pomelo growers received eviction notices from Arash Kukuh Enterprise’s lawyer on Oct 24 last year.

A land title was issued to Arash Kukuh Enterprise on Aug 11, 2005 even though the pomelo growers had been applying for the land since 1978.

Ahmad Husni said he wants to continue seeing the cultivation of the fruit in his constituency.

“The pomelo here has attracted so many domestic and foreign tourists.

“We will fight to see it stay successful, which is why we had asked the government to give out 99-year land titles to some of the growers here a few years ago,” he said.

“I have also allocated RM27,000 for a giant replica of the fruit to be constructed here to attract tourists,” he added. Meanwhile, Arash Kukuh director Datuk Mohamad Raduan Mohd Kasim said he would like to discuss with the Ampang pomelo growers about the piece of land being used for agriculture purposes.

He said he hoped the pomelo growers would agree to the meet and come up with a win-win situation for both parties.

“The pomelo growers are cultivating illegally on our land,” he said during a recent press conference.

“We hope that they will give us their full cooperation and seek an amicable solution without further delay,” he said, adding that he wants the pomelo growers to vacate the land owned by the company.

“If we are unable to reach a viable solution, we might consider legal action as a last resort,” he added. 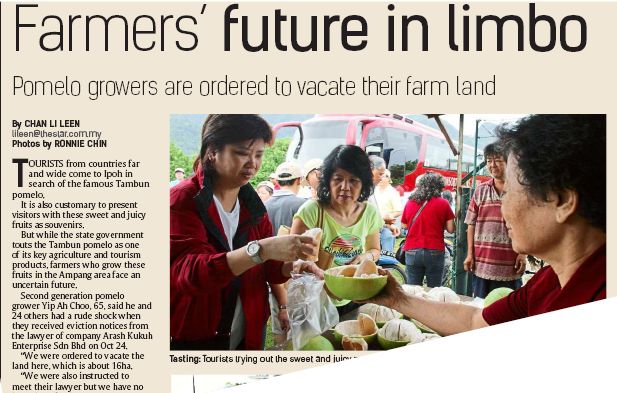 Flashback: This story appeared in MetroPerak on Jan 5.

Mohd Raduan said the piece of land was bought in 2002.

“I want to stress that the land was bought and not given by the government.

“We have bought it for the purpose of developing affordable homes for Malaysians in line with the government’s policy,” he said.

“The land is for residential use only and not for agriculture, thus it is only for housing development,” he added.