Produce being sold by illegal traders may not be fresh

Outside the market: A foreign trader selling produce in the carpark.

CONSUMERS looking for cheaper produce from carpark traders outside the Pasar Borong Selayang (wholesale market) could be paying for discarded items.

Foreign traders who are selling vegetables, fish and meat at the carpark lots near the market are retailing their goods at unbelievably low prices.

The stalls, manned by Myanmar and Indonesian nationals, are located about 500 metres away from the wet market.

Some consumers who were met by StarMetro during a site visit recently, said the goods may not be fresh.

They also alleged that vegetables and fruits sold by these foreigners were at half the market price — attracting buyers from local restaurant as well as hawkers who benefited from the “savings”.

What’s even more shocking, are allegations from consumers about the produce and goods being foraged and sold after traders at the Pasar Borong Selayang discard them. Countless enforcement efforts by the local authorities have had little effect in deterring the foreign traders from doing business near the premises.

Selayang MCA Youth chief Chan Wun Hoong said these foreigners should not be allowed to trade as they had no business licences or even work permits.

“Many local and legitimate business operators are losing customers because of them.

“Most of the customers are other foreigners. Selayang Baru and its surrounding areas have become like a settlement for them,’’ he said.

Chan suggested that the Selayang Municipal Council (MPS) place an enforcement team at the Pasar Borong Selayang permanently to ensure foreigners do not do business there.

He added that MPS can convert the area into a parking lot to deter foreigners from trading at the site.

Selayang MIC division acting deputy chairman M.B Raja said trading from the roadside was unhygienic and that the discarded fruits, vegetables and seafood were not fresh. 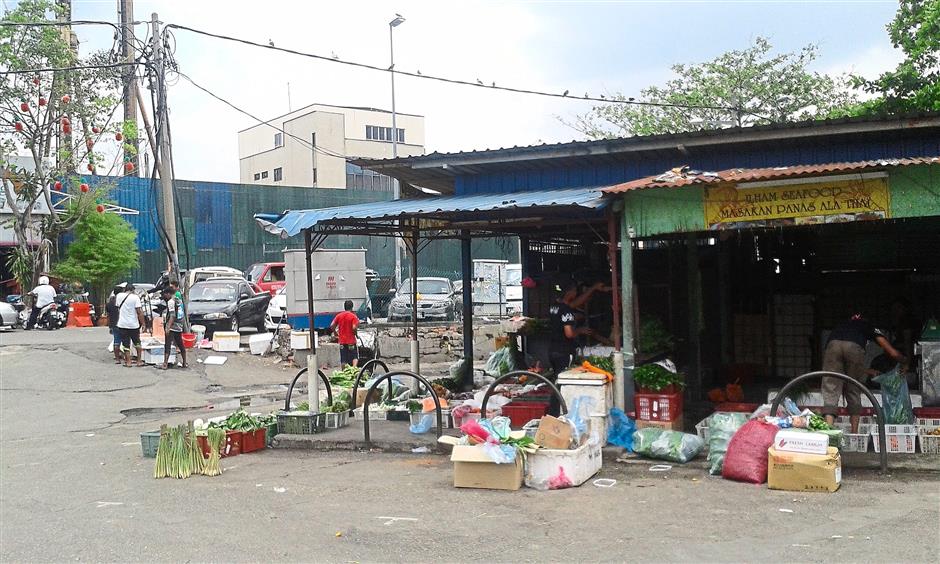 Convenient spot: Baskets of vegetables and fruits placed outside food stalls in Selayang. Mohd Azizi says it is hard to catch the illegal traders in the act of selling these items as some would hide in the stalls when the authorities conduct raids.

“I advise the public not to buy from these foreigners. I hope MPS will put a sign in the area to warn the public,’’ he said.

Taman Melati MIC branch chairman Ravindran Mariappan, 48, who resides in Templer Park, said he had seen foreigners picking up discarded vegetables and washing them before selling.

“I do no like to go to the market as it is filthy. The foreigners chew betel leaves and spit them out on the walkway.

“The Health Ministry should also inspect the market,’’ he said.

“We have done these many times but they always resume business later.

“There is also an overlap of jurisdiction as the market in Selayang is located on the border of Selayang and Kuala Lumpur and this is why we now hold joint raids. Less than market price: A foreign trader selling freshwater prawns at RM27 per kilogramme at the Selayang wholesale market.

“It is difficult to catch them in the act of selling as some will hide in food stalls or restaurants.

“When we conduct our raids, the restaurant or food stall owner collude with the foreigners by claiming that the vegetables or fruits belong to them.

“We have started to revoke licences of local MPS stall owners who rent their premises to foreigners,’’ said Mohd Azizi.