GOPENG MCA vice chairman Phang Tzu Pin’s passing still comes as a shock to his father as the family continues to mourn his death.

Phang See Kong, 75, said his son’s death was sudden and the family had not expected him to pass away at a such a young age.

See Kong, the founder and curator of Gopeng Museum, said his son was only 44 when he passed away on Friday after complaining about dizziness before collapsing at his company in Simpang Pulai at about 6pm.

“I know I have to accept that my son is dead but I am still unable to come to terms with his passing.

“He was still able to joke during the morning of that fateful day and did not look like he was ill,” he told MetroPerak when met at their home at Taman Bertuah, Gopeng on Tuesday.

“He also met my youngest daughter at about 5pm and passed her some roast pork before telling her to help him buy movie tickets for the night,” he said.

Tzu Pin, also known to his friends as Ken, died from a heart attack. 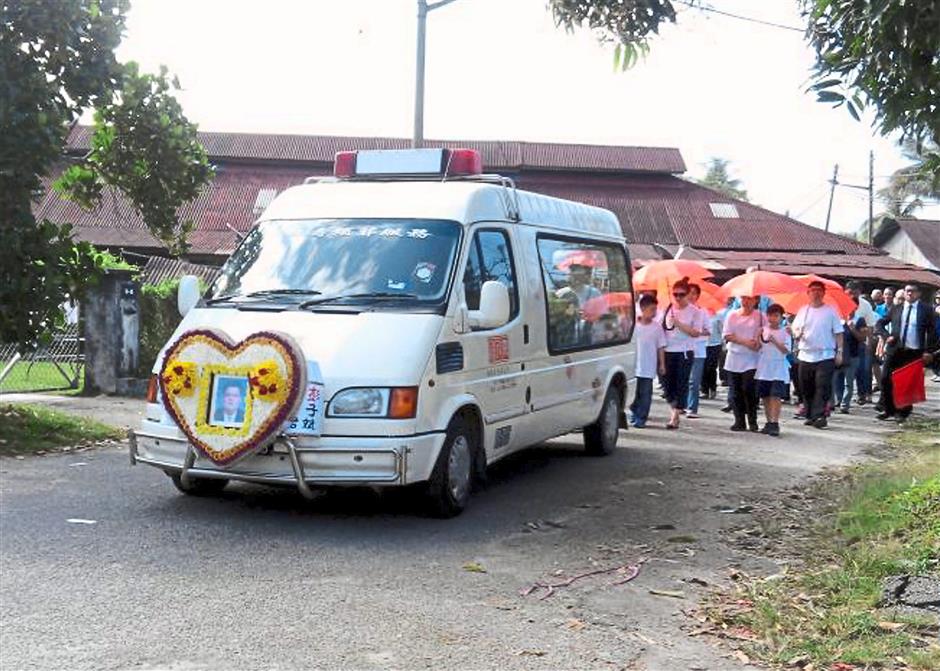 His colleagues tried to resuscitate him after he collapsed and he was rushed to a private hospital in Ipoh where he died shortly after.

See Kong said he felt that his son had not rested enough during the Chinese New Year celebration, as he attended lots of open houses and events.

“He would travel here and there for gatherings with friends and come back home around midnight.

“As far as I know, he did not have any history of any illness,” he said. See Kong said Tzu Pin was not married and had lived with him and his 74-year-old wife Chin Pik Nyee in Gopeng.

“He was a filial son who takes care of my wife and I.

“He was the third of four siblings. His two elder siblings are working abroad,” he said.

“He was a gregarious man, who was very active socially and politically, and had lots of friends of all races,” he added. The procession: Tzu Pin’s family members walking to “send” him off during the funeral rite at Taman Bertuah, Gopeng.

“He was also hardworking and dedicated to completing whatever tasks that was asked of him,” Phang said.

Thousands of friends and family members attended the wake to extend their condolences to the family on Saturday. Amongst those present included MCA president Datuk Seri Liow Tiong Lai, state MCA chairman Datuk Dr Mah Hang Soon and representatives from Umno and MIC.

Tzu Pin’s body was cremated at the Kek Look Seah crematorium in Bercham following a final funeral rite and procession on Tuesday.