KUCHING: Improvement works at the Heroes Grave at Jalan Taman Budaya here will be completed by the end of this month.

Deputy Chief Minister Tan Sri Alfred Jabu said the works included putting up headstones for the graves of decorated war hero Datuk Temenggung Kanang Langkau, who passed away in 2012, and policeman DSP Michael Padel who was killed in an attack by Sulu gunmen in Semporna, Sabah, in 2013.

“According to the contractor, this will be completed by the end of March. It will be in time for Easter, as I had promised earlier,” he told reporters after inspecting the site yesterday.

Jabu said a cenotaph and wall would also be built, on which the names of the state’s fallen heroes would be inscribed. 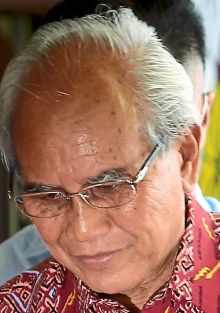 Improvement: Jabu says there will be proper landscaping.

He said there would also be space for the names of Commonwealth troops who fought and lost their lives here to be inscribed on the wall.

“This place will be beautified in honour of our fallen heroes who sacrificed their lives to defend our country. There will be a fence and proper landscaping to improve the compound.

“It will be very beautiful and properly looked after. I’m thankful to the military, police, State Secretary’s Office, Chief Minister’s Office, Kuching North City Commission and Tourism Ministry who played a role in the project,” he added.

The improvement project started about a month ago at a cost of nearly RM200,000.

A special ceremony will be held when it is completed.