A taste of Chinese culture

TOURISTS in Penang for Chinese New Year had their holidays perked up with an exciting array of cultural performances.

Among them were English couple Martin and Christine Reynolds, both 62, who experienced such a celebration for the first time.

“We’ve been to several Asian countries around this time of year previously, but departed just before festivities began.

“This time, we tried to make our holidays coincide with the celebration,” said Christine when met at Golden Sands Resort in Batu Ferringhi.

The hotel had organised lion dance, dragon dance and thundering drums performances, a God of Prosperity appearance and yee sang-tossing session on the first day of the Lunar New Year.

“It’s our first time witnessing such traditions. We don’t go to such great lengths to celebrate our New Year back home as it’s usually free-zing,” quipped Martin.

The couple from Nottingham both enjoyed the occasion, and noted that if they visit Malaysia again, it would certainly be this time. 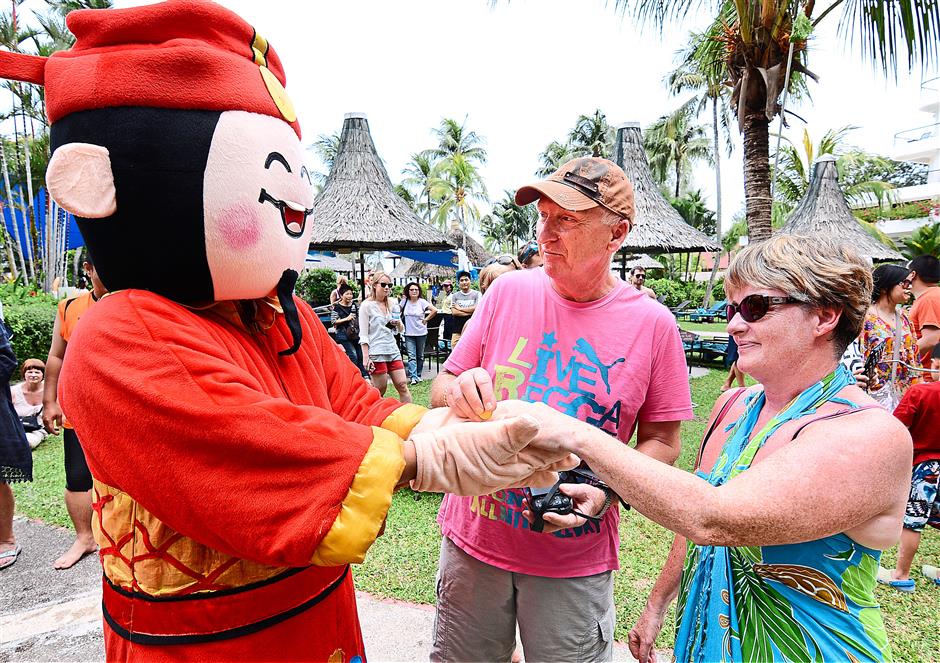 Divine gifts: English tourists Martin and Christine receiving gold coins from the God of Prosperity during the event.

Fellow holidaymaker Kenneth Yu, 46, from Hong Kong, who had his wife and two children in tow, said they came here for a different Lunar New Year experience.

“We knew there is a large Chinese community here, and that celebrations are quite different.

“In some ways, the atmosphere is even more vibrant than back home,” added Yu.

At the neighbouring Shangri-La’s Rasa Sayang Resort and Spa, there was an expanded line up of performances to entertain guests. Keeping the peace: The heavenly king stepping in to settle the duel between the southern and northern lions.

Among the highlights was a ‘duel’ between a northern lion and a southern one over a large pearl, which was ultimately resolved when a heavenly king appeared.

A luminescent dragon then snaked its way under multi-century-old rain trees, while the God of Prosperity made his rounds to distribute gold coins.

Resort director of communications Suleiman Tunku Abdul Rahman said the activities were an annual tradition aimed at giving guests an insight into Chinese culture and traditions.