Public utility land, for now: The land in Section 7, Shah Alam which is located behind Klinik Kesihatan was originally gazetted for a police station. However, a proposal has been submitted to MBSA, to turn it into commercial land after the land came into the ownership of a private owner.

PROPOSALS to re-zone two public utility lands in Shah Alam for commercial use have shocked residents and non-governmental organisations (NGO) in the city.

The proposal was submitted to the Shah Alam City Council (MBSA) for approval under the third amendment of the Shah Alam Draft Plan 2020 by two private companies last year.

The land re-zoning in Kota Kemuning has been submitted for a petrol kiosk while the second piece of land in Section 7 is a request for conversion to commercial status.

The amendments got the attention of local NGO Prihatin Selangor chairman Allan Ang during the council’s draft plan exhibition.

The exhibition was held at several shopping centres as well as the MBSA branch in Kota Kemuning and Sungai Buloh from Aug 7 to Sept 5, 2014. Uncertain outcome: The parcel of land behind this abandoned building was initially slated for low-cost housing but it is now being proposed to be used for a petrol kiosk.

Ang said the NGO was disappointed that public amenities which are part of the initial town-planning plans were being converted for commercial gains.

“We are opposing this because the people should get the amenities promised to them. These lands were gazetted for a reason and were awarded during the town-planning exercise,” added Ang.

He said the NGO was raising the issue because many people were unaware of the changes made to the draft plan and someone should fight for the rights of the residents.

“We do not know how the land changed hands or the nature of its ownership but this should not happen,” added Ang.

The NGO sent in an objection on Sept 3, 2014 to MBSA on behalf of the people.

In Prihatin’s objection, it listed suggestions for the proposed amendments if both owners intend to continue their plans.

For the Section 7 land, Ang suggested retaining 50% of the gazetted land for the use of public utilities while the owner of the land in Kota Kemuning should identify another piece of land in the area and surrender it to the government. 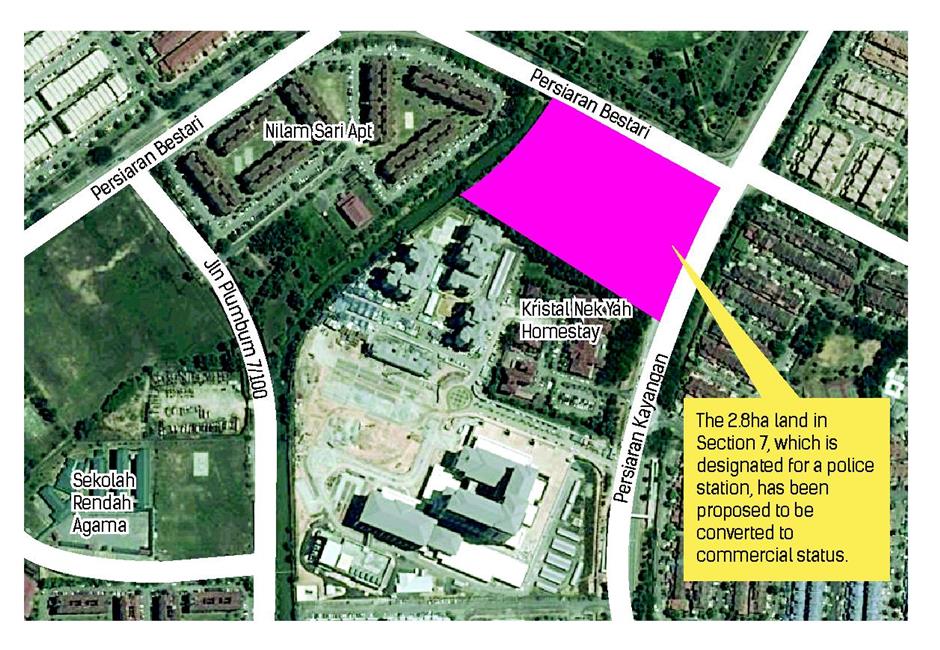 Former MBSA councillor Sarimah Lisut said a detailed study should have been conducted to build affordable homes before the land usage was changed.

“The government has been advocating the One Family One Home concept, and this clearly goes against its intention,” she said.

In fact under this scheme, it was decided last year that there should be 15,000 units in each constituency, in three years.

She said residents in Shah Alam had requested for low-cost homes, especially with the rise in cost of living.

Sarimah said low-cost houses and apartments cost RM800 in rental these days and it would be better if the tenants could use the money to purchase their own homes instead.

She said many lamented on the lack of affordable housing in Shah Alam and their needs should be taken into account.

When contacted, several Shah Alam residents were shocked and said they were unaware of the issue.

Taman Sri Muda, the closest locality to the Kota Kemuning land, is one of the most highly populated areas, with a large number of migrant workers from other states.

Taman Sri Muda Zone A Rukun Tetangga chairman T. Mogan said roups of up to 10 young men and women squeeze into homes because they cannot afford houses nearby.

“The petrol pump will not benefit the general public and the people in surrounding neighbourhoods should be given first priority,” said Mogan.

He added that there were many villages and squatters nearby with young adults eager to buy their own home to start a family.

These young people, he said, deserved affordable homes or they would never be able to own homes with their meagre salary.

Section 7 resident Aishah Nadirah Ismail, 35, said even though the area was the largest section in the city, their police station was located in a small area in the far corner of the commercial centre.

She said Section 7 was one of the most densely-populated sections in Shah Alam with residential areas, several bustling commercial areas, an industrial area, two higher learning institutions and the hugely popular iCity.

“Soon the Shah Alam Hospital will operate there too.

“This area also receives a lot of visitors on weekends and public holidays, during convocations and festive periods.

“A place this big should have prominent police presence for the safety and security of residents and businesses,” she added.

Aishah said she was not sure how another commercial entity would benefit residents as Section 7 was already congested.

“I hope when the hospital begins operations, MBSA will take the necessary measures to curb haphazard parking and other traffic woes that is plaguing Section 7 residents, especially the area fronting Persiaran Kayangan,” she said.

“When we received the application for re-zoning of land, the land title had already changed and that jurisdiction lies with the state government,” she said.

The council, she said, would follow the local plan at the time of the gazettement but the land ownership may have changed now.

“The original plan in Bukit Rimau, for example, designated the land parcel as residential (low cost), however the land title says commercial,” she said.

The decision, Sheema added, depended on the state and the objections raised would be carefully weighed during the meeting.