SMK SERI Keledang in Menglembu recently held a reunion dinner to usher in the Year of the Goat.

More than 50 guests attended the dinner at Fu Lim Restaurant, including school principal Sit Wai Yin, members of the school board of governors, Parents Teachers Association (PTA) members and the school alumni club.

Teachers were also invited to the event where Sit announced development plans for the school in 2015.

Sit wanted everyone in the school to set a high but achievable benchmark in terms of performance and delivery, hence this year’s school slogan is “Aim High”.

“I believe that Seri Keledang has a lot of untapped potential in its teachers and students.

“It is also time for the school to be upgraded in terms of facilities and infrastructure as the enrolment is now more than 1,500 students with over 100 teachers,” he said.

Noting that the school infrastructure was more than 20 years old, Sit said the wiring and piping was giving problems such as power outages and no water supply.

“I believe that with a good learning environment, the students can learn comfortably,” he said.

Sit also mentioned other school programmes lined up for this year.

Among the other plans in the first two months of the year are allowances for underprivileged students and inculcating moral values in students.

“The school obtained a sponsorship to provide monetary aid to students from needy families to buy enough food and drinks in the canteen.

“Other than that, teachers in the Chinese Language Department will organise a session to instil moral values in our students so that they will respect teachers and parents,” he said.

The dinner was a reunion for the school’s former students who formed the Alumni Club.

In her speech, club chairman Kwok Sing Yee said she was confident that Seri Keledang will be the school to watch in 2015, especially with the achievements recorded by the Chinese Orchestra team in recent years.

Kwok also gave her assurance that the members of the Alumni Club will give their unwavering support to the school.

“I urge my former schoolmates to join the alumni and contribute to our alma mater,” said Kwok.

PTA chairman Lip Chooi Fun said that the school and parents must collaborate if they want to see the students succeed in their academic and extra-curricular activities.

“The PTA will support the transformation brought by Sit to elevate the school’s status in Menglembu and hopefully, Perak.

Being the backbone of the school, the board of governors, led by its chairman Choong Kai Hoong, pledged to make the plan of building a multi-purpose hall for students a reality.

Choong, in his speech, mentioned that the school hall will be the utmost priority this year.

“We have to look after our children’s welfare as they are our future leaders.

“If they cannot even gather for the weekly assembly because of the hot weather and rain, it is impossible for the school to share information effectively.

“It is important for the school to build this multi-purpose hall,” he said.

Choong added that the hall could be a sports centre and venue for school activities.

During the dinner, Sit led the yee sang tossing event with the board of governors, PTA and school administrators. 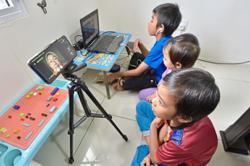