HE HAS had only four hours of sleep daily for the last two weeks.

It is the time of the year when the Oh family will be busy making nian gao (glutinous rice cake) for Chinese New Year.

But 78-year-old Oh Cheng Guan is certainly not complaining about the almost round the clock job.

“I had been helping my parents to make nian gao since I was 13 years old.

“It was a very tedious job but we enjoyed doing it once a year and we earned extra money.

“Working hard has always been the only way for us to earn money for three meals a day,” he said when met at his stall at the SPPK wet market in Pengkalan, Ipoh recently.

Oh, his wife, son and daughter-in-law would be making nian gao for 16 days this year. 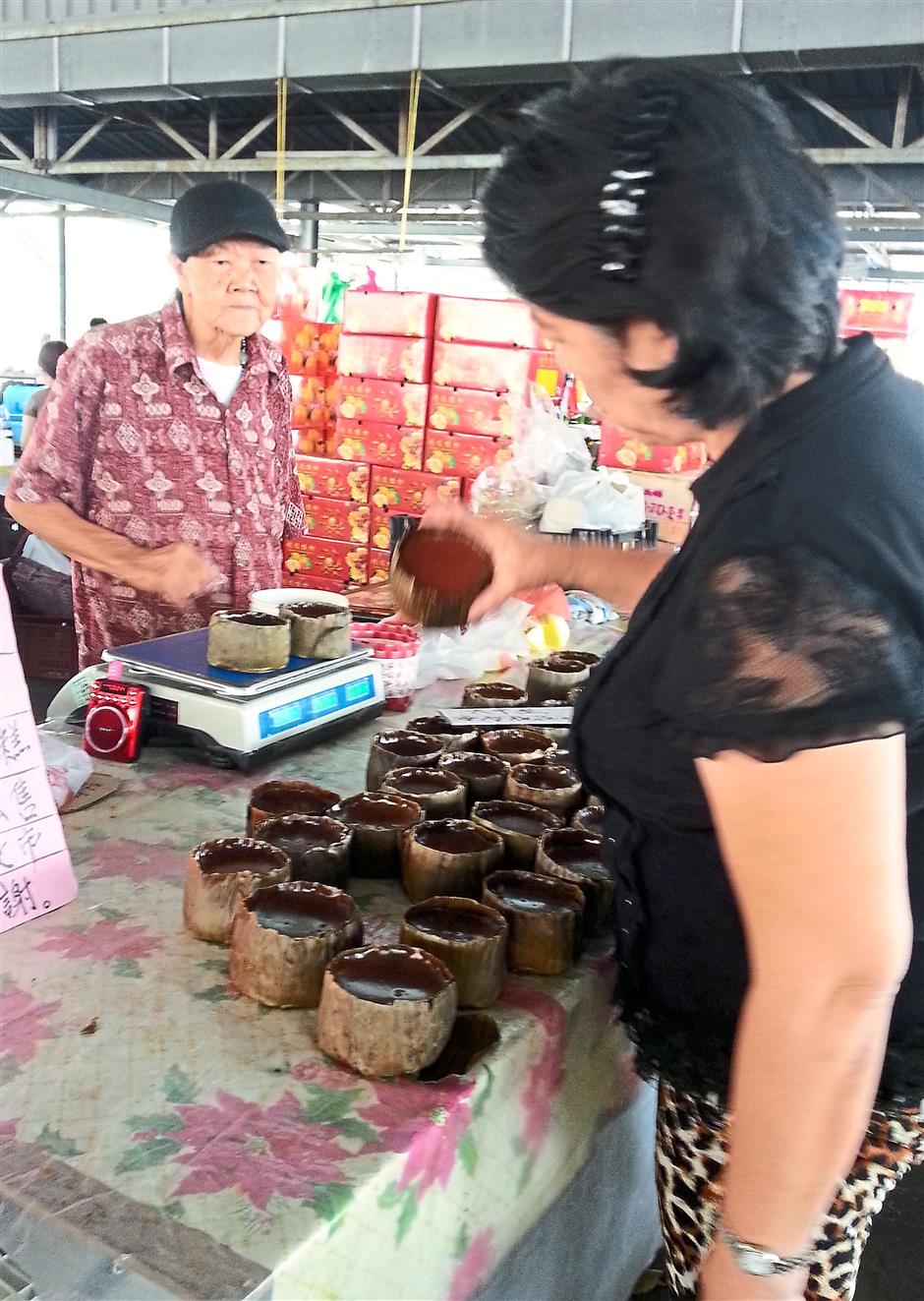 Careful selection: Oh (left) with a customer at his stall in SPPK wet market in Pengkalan, Ipoh.

A typical day for Oh starts at 5am where he prepares to set up his stall at the market.

His business hours are between 5.30am and noon.

He joins them once he returns home.

“My son and I will prepare the dough. It involves lots of kneading and one must have the strength to do that.

My daughter-in-law will clean the banana leaves while my son will heat the leaves over the fire to make it soft.

“My wife is in charge of lining the tin cans with the banana leaves,” he said with enthusiasm when met at his stall recently.

Oh said the tins of nian gao would be stacked in a big kuali and steamed for 18 hours.

“All the nian gao will be in the kuali by1am before we go to bed.

“We wake up at 5am to start the steaming and the nian gao will be ready by 11pm the same day,” he said, adding that the nian gao would be ready to be sold two days later.

On how to make good nian gao - smooth texture and golden brown in colour - Oh said using the right type of glutinous rice is important.

He revealed that he had taken some time to experiment with different brands of the rice before finding the best one.

Apart from that, he also pointed out that experience was also very important in coming up with good nian gao, while the composition of ground glutinous rice and sugar was almost the same for all nian gao.

Oh pointed out that the technique of kneading the dough and steaming would make a big difference.

“This is a skill and comes naturally from experimentation and experience,” he added.

On business, Oh said it was a bit slow this year.

While nian gao (which means achieving greater heights in the new year in Mandarin) is a much sought-after sweet delicacy and is believed to bring good tidings as well, Oh reckoned that customers were cutting down on their spending this round because of the high cost of living.

“All the prices of raw materials, including the banana leaves for making nian gao, have gone up this year,” he lamented.

The Oh family’s nian gao is priced at RM20 per kilo this year against RM18 last year.

Oh said they had managed to keep the retail price reasonable because they made the nian gao and sold the items direct to the customers.

“We do not sell wholesale to retailers so that customers can always get good nian gao at a good price every year,” said Oh, who was visibly proud of his family business, which was started by his parents almost 80 years ago.

There was no sign of fatigue on his weather-beaten face as he kept looking out for customers while enjoying Chinese songs from yesteryear.