Getting some air: Muhd Firkri, who won first prize for the best trick in the rail category, during the friendly skateboard competition held at the MBPJ Skateboard Arena.

SKATEBOARDING across 8,000km is by no stretch of the imagination an easy feat, but skateboarding for a cause close to his heart was the reason that got Rob Dyer, 30, through.

Back in Malaysia for a second collaboration with 1Malaysia For Youth (iM4U) and his brand of volunteerism of combining fun with a cause, Dyer continues to skateboard for cancer awareness and early detection.

Introduced to iM4U by his good friend and professional entertainer magician Scott Hammell, 29, the inspirational duo with widely differing forms of art are touring Malaysia as part of iM4U’s Reach Out Convention and Celebration 2015.

Their first stop was Penang, followed by a friendly skateboard competition in Petaling Jaya recently to encourage volunteerism in youths while spreading the message of cancer prevention. Cheese: Hamell (in green) using a monopod to take a group photo with Dyer (wearing cap) and the iM4U skateboard enthusiasts.

Sliding across rails and performing air flips with skateboards were just some of the tricks and skills these skateboarding devotees showed off during the competition.

Syed Syatvie Rusydie, 26, who started skateboarding at the age of 11, made this trip after finding out about Dyer via Instagram.

“I found Dyer to be genuine. He did it the hard way, not with just the typical fundraising but literally spreading awareness on foot, or in his case on a skateboard.

“My mother battled cancer for about three years. She is alright now,” said the Sarawakian, relating his experience with the illness.

During the event in Petaling Jaya, Dyer spoke about his journey with his foundation Skate4Cancer travelling across Canada, Australia, New Zealand, France and the United States on a skateboard.

The Canadian founded Skate4Cancer about 11 years ago at the headstrong age of 17 with a conviction that “the cure is knowledge, and knowledge is power.” 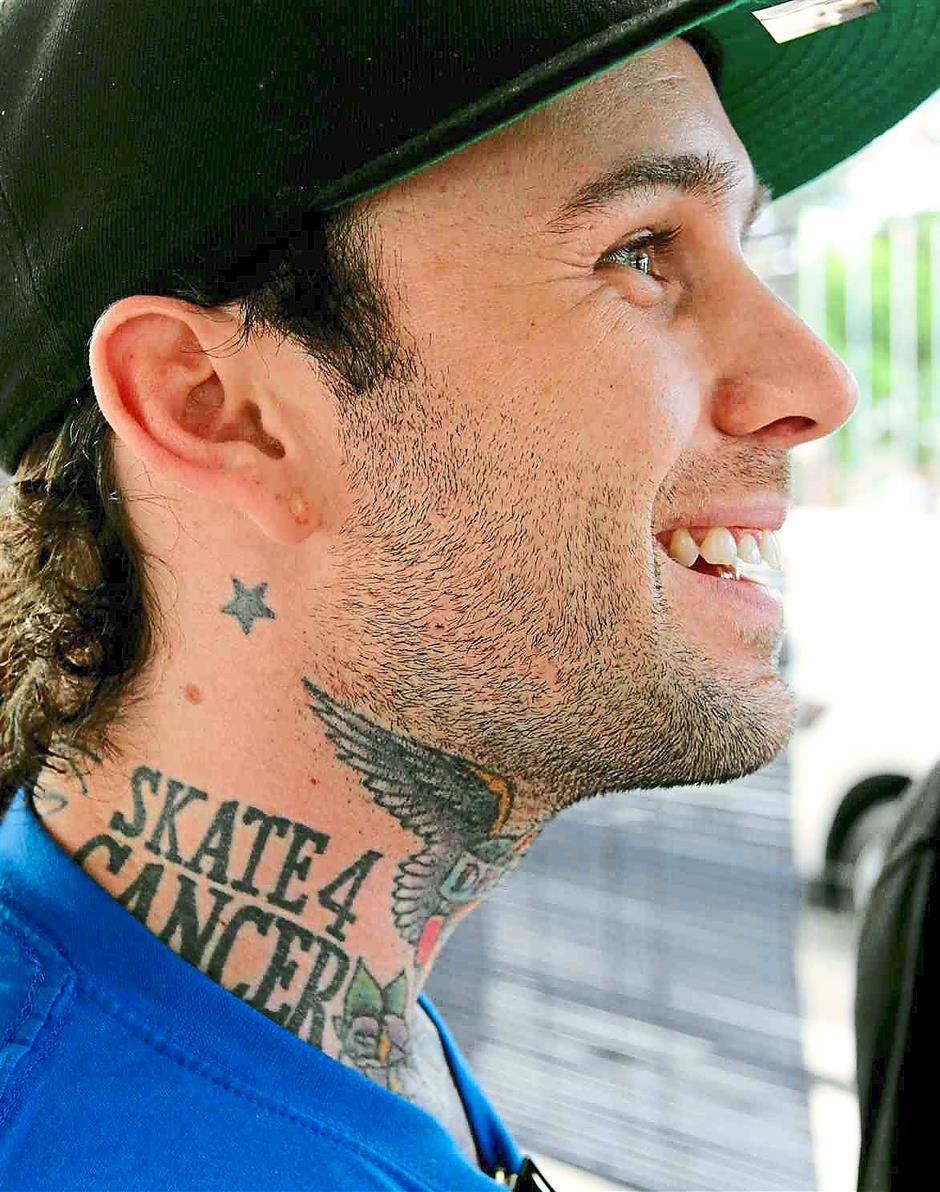 Inked with a conscience: Dyer shows the conviction he has for his cause with a tattoo.


He has since raised US$1mil for various cancer charities.

“I found tragedies to be the most motivating thing in life, losing the people I love to cancer was what motivated me to start Skate4Cancer,” he said, adding that he got the idea from his hero Terry Fox, a cancer amputee who started a fundraising run across Canada.

“I have not seen a programme like iM4U in which a government gets involved in volunteerism, and it was even more amazing and rare that the young community is taking part and getting involved,” said Dyer.

“It was great to see a group of skateboarders get together and start the conversation and see what they can do within their own community to help out.

“We all have something within us that we can contribute to our community, and I am blown away by Malaysians’ sense of community,

“That is what Malaysia is to me, you care about your community and each other, even strangers, it’s unbelievable,” he added.

Hammell said, “Find your passion and make it happen, that is my whole motto for life. Test of balance: Syed Syatvie, whose mother battled cancer for about three years, grinding his way across a bench.


“When you attach an issue with something that you are passionate about, then amazing things can happen,” he said.

Prior to the skateboarding event, Dyer and Hammell paid an uplifting visit to underprivileged children of Rumah Hope with about 20 iM4U youth volunteers, providing motivation for the youngsters at the home and those volunteering.

“It was my first time at an orphanage and it was a fun experience. 
“We brought new bedsheets for the children and help them change the sheets,” said iM4U volunteer Nur Maisurah Ali Nordin, 12, who has been skateboarding for three months.

“It makes me feel empathy for these children and am glad that I was able to help a bit,” she added.

Dyer and Hammell will be heading to Sabah and Sarawak next, ending with a return to the Klang Valley for the closing concert in Kuala Lumpur. For details of the upcoming iM4U events, visit www.im4u.com.my