Temporary measure: A gap in the railing secured with a wire mesh by residents at the Kota Damansara PPR flats, where a five-year-old boy fell to his death.

CONFUSION over who should be responsible for the maintenance of the People’s Housing Project (PPR) flats in Selangor has had tragic consequences.

There have been two deaths at the Section 8 Kota Damansara PPR flats in Petaling Jaya since June 2013, involving two five-year-old boys who fell from the 14th floor and sixth floor.

The first incident happened because of a rusty railing that gave way, while in the second incident last Wednesday, the victim fell through a gap in the railing.

“We have been complaining even before the first incident but we do not know who to complain to anymore because our complaints have always fallen on deaf ears,” said a resident, Siti Khadijah Samad.

She added that getting the right person to help them maintain the facilities at the flats had been an uphill task.

After the first incident, residents inspected all four blocks of flats and found more than 1,000 dangerous spots, where the decade-old railings were almost falling apart.

They have taken their complaints to Petaling Jaya City Council (MBPJ), to both their MP and assemblyman, to the councillor in charge of the area, to the then Petaling Jaya mayor Datin Paduka Alinah Ahmad and even to former Mentri Besar Tan Sri Khalid Ibrahim.

However, no action was taken by the authorities and the residents did not hear back from anyone.

“I hope and pray that those responsible for the maintenance of the flats will replace all railings and improve the safety here,” said the Kota Damansara PPR flats Residents Association chairman Johari Nander. 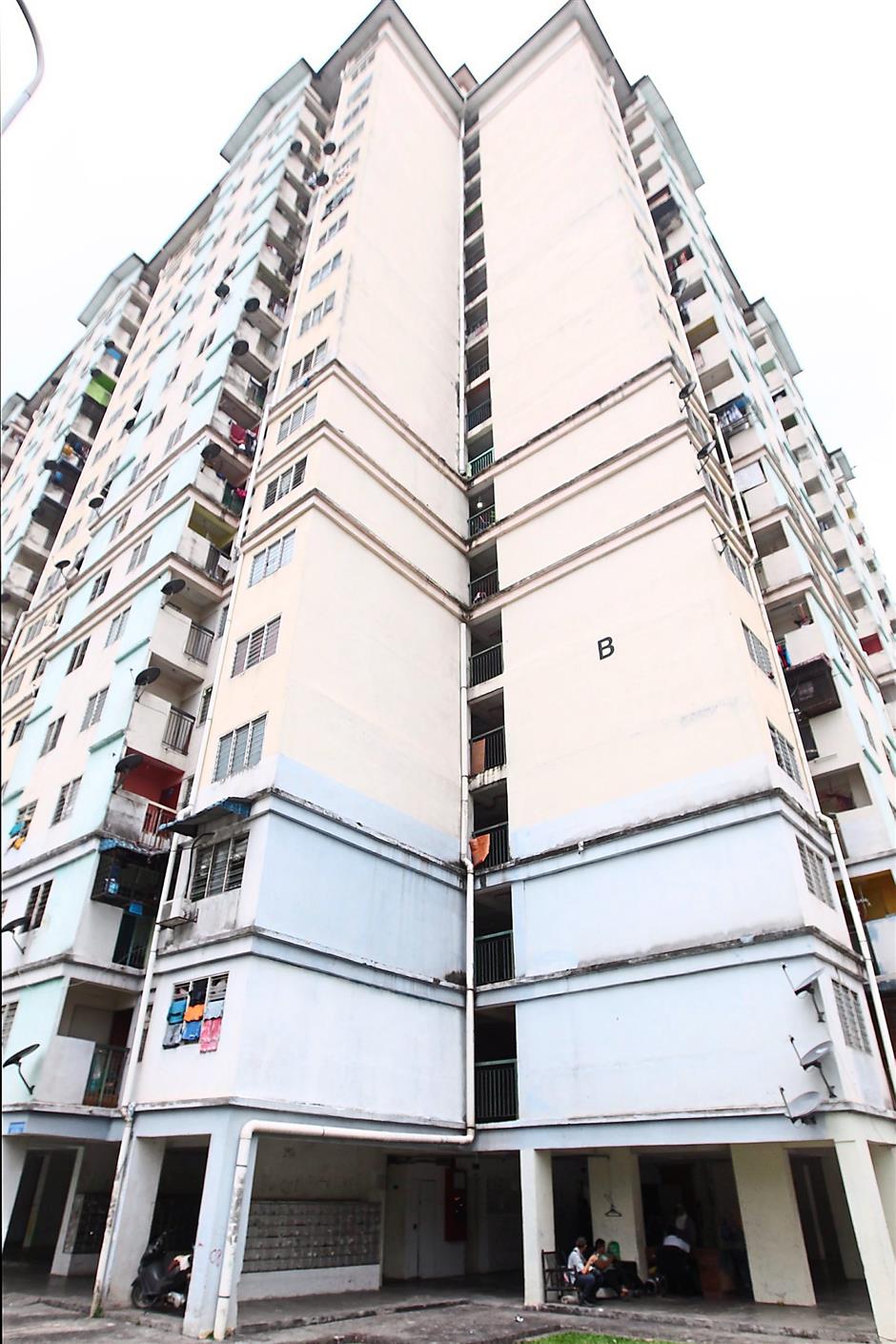 Tragic incident: Block B of the Kota Damansara PPr flats, where the five-year-old boy fellfrom the sixth floor.

He revealed that there had been more than two incidents caused by rusty railings since the flats were built in 2002.

He said there were no clear complaints system that allowed residents to lodge complaints and monitor or find out if action would be taken.

Friends of Kota Damansara chairman Jeffrey Phang said residents had repeatedly complained about the missing railings on the sixth floor of Block B between June and August last year.

“They were given the runaround and no one wanted to take the responsibility for fixing the railings.

“The death of another boy was the price residents had to pay for the inefficiency of those responsible.

“This death is even more painful because the problem is known but has remained unresolved over the years,” he said.

PPR Hicom Shah Alam residents representative Haidzir Sham Masngat said their complaints went unattended even though they had directed it to the authority in charge.

“Infrastructure issues are under the Selangor Housing and Property Board (LPHS) and not under Shah Alam City Council (MBSA), from the very beginning,” he said.

However, he added that it would be helpful if MBSA or any other party could help provide for their maintenance budget.

Except for the Taman Putra Permai PPR flats in Lembah Subang, which is under MBPJ, the rest are the responsibility of LPHS.

A check with MBPJ showed that maintenance of the Kota Damansara PPR used to be under the local council.

“During the handover, we agreed to fix a few fixtures that were broken. The repairs cost RM1,987,656.

“MBPJ completed the works and officially handed the flats and its maintenance over to LPHS in November 2014,” said Petaling Jaya deputy mayor Puasa Md Taib.

Among works done were repairing a broken water tank in Blocks A and D, and installing a new water pump unit for Block A.

The council also upgraded and repaired the fire safety equipment in all blocks, along with installing a few new railings and repairing broken roofs in the corridors of all blocks.

“In the meantime, we also requested for funding from the Implementation and Coordination Unit (ICU),” said Puasa.

The ICU is handled by the Selangor State Development Office.

“ICU called for a Project Implementation and Coordination Meeting with us for the PPR Kota Damansara maintenance programme on Sept 30 last year.

“After the discussion, we handed over the Bill of Quantity report along with proposed drawings of the new railings,” Puasa said.

However, he does not know of the project’s current status as it is no longer in MBPJ’s hands.

When contacted, PHSSB general manager Nazmi Osman replied in a text message that the company was tasked with maintenance and rental collection for all PPR flats under them.

He said they did not have a separate budget set aside for maintenance as the funds came from the monthly rental collection.

“Expenses for the PPR flats are based on the rental collection,” he said.

When asked about the price of rental and how much was collected monthly, he replied that the information was not for public.

Meanwhile, Kota Damansara MP Halimaton Saadiah Bohan said some residents said they were finding it hard to cope with the increase in rent.

She urged LPHS and the state government to carry out repair works and maintenance immediately as most of the PPR flats here are poorly maintained and pose a danger to all residents.

“LPHS should also not expect the residents to fork out their own money for the repairs as they cannot afford it,” she said.

PPR Hicom Shah Alam flats residents said their rent was RM250 per month, inclusive of maintenance fees, but the broken fixtures at the flats had yet to be repaired.

“LPHS cannot ignore this issue and they should assist in developing the infrastructure, not only in terms of railings but also other facilities.

“MBSA does not have a specific budget for the flats; I previously made a proposal to allocate a budget for them but was rejected,” said MBSA former councillor Jaberi Ami.

“I suggest that LPHS and MBSA work together to create a unit that inspects the condition of the PPR flats. Their scope of work can be opened for discussion,” he added.

When contacted, Kota Raja Wanita MCA chief Chew Soo Mee voiced her disappointment over how everyone was paying attention only after a tragedy had happened.

“Who is responsible is one thing, the safety of residents is more important,” she said.

Meanwhile, it has been reported that the Federal Government allocated an emergency fund of RM1.8mil to fix the railings in all blocks of the Kota Damansara PPR flats in light of the second death last week.

Selangor Housing, Building and Urban Settlers Management Committee chairman Iskandar Abdul Samad said in a statement last week that all PPR flats in the state would be checked by LPHS immediately.

A sum of RM5mil has also been allocated to repair lifts, broken water pipes, all railings and broken stairs at the Kota Damansara PPR flats.