Financial burden: Lee, who has an outstanding maintenance bill of more than RM2,000, is shocked to learn about the compounded interest of close to RM1,000 that she has to pay to PDC.

RESIDENTS staying in high-rise buildings managed by Penang Development Corporation (PDC) generally do not mind paying maintenance fees, provided the upkeep and maintenance are up to mark.

A government servant, who declined to be named, said he believed residents would surely pay if they were satisfied with the services provided by the corporation.

“The monthly fee of RM48 is reasonable at my Taman Pelangi apartment block in Lintang Macallum 2.

“But look at the basic infrastructure and amenities here. The guardhouse, the playground and the water pump house are in dilapidated state.

“The clogged drains, too, are another concern,” said the 52-year-old when met at his apartment block recently. 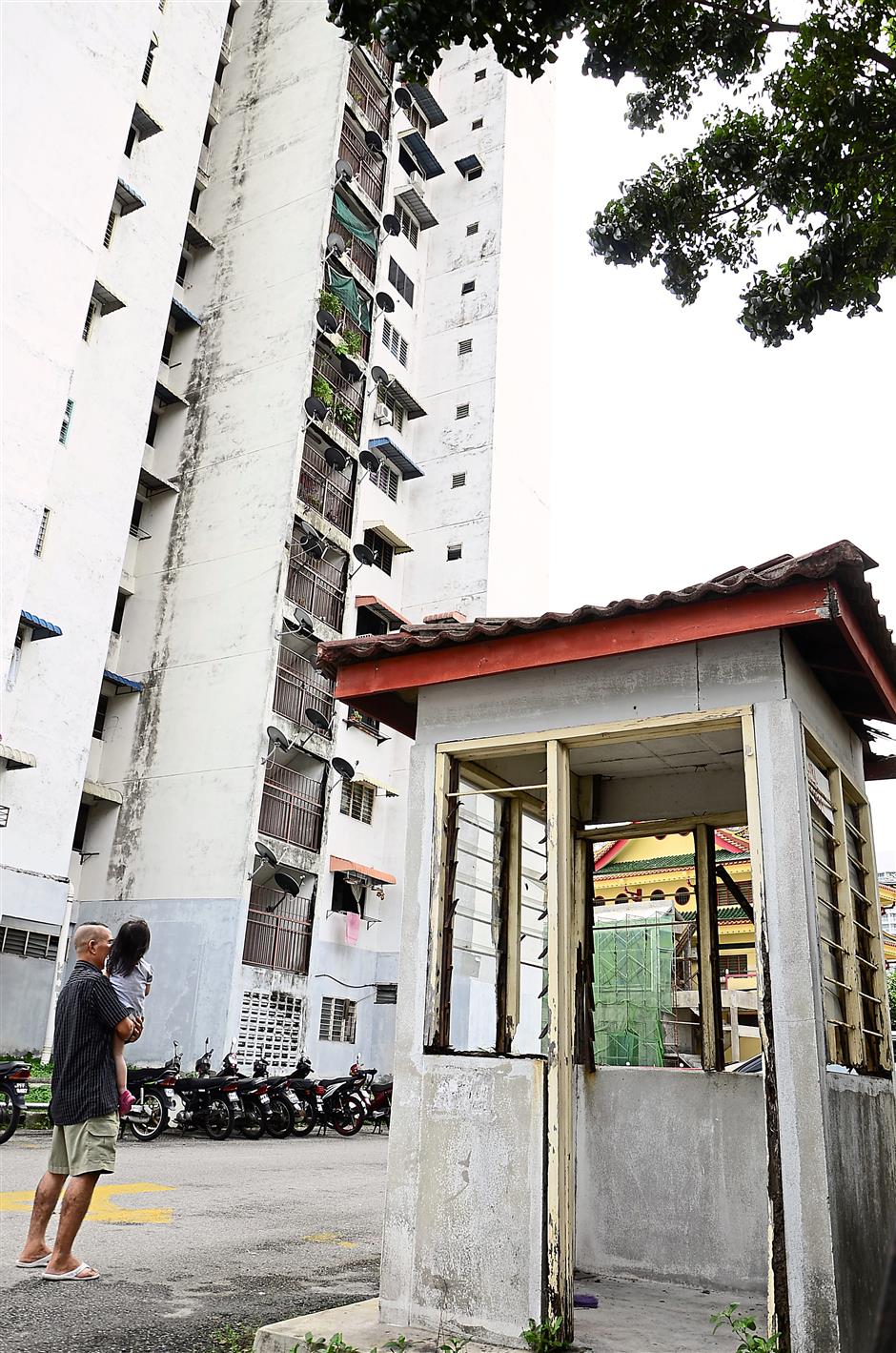 Poor condition: A resident checking out the dilapidated guardhouse that has been vacant for quite sometime at the Taman Pelangi apartment in Lintang Macallum 2, Penang.

Lim, who is also PDC chairman, had said PDC would not be absorbing the 6% Goods and Services Tax (GST) from the maintenance fees of its projects.

He said the corporation could not afford to do so and would not want to set a precedent.

The Star had also reported that according to the Auditor-General’s (AG) 2013 (Series 3) report, the management activities of the PDC’s Setia Urus (PDCSU) were less than satisfactory in some areas.

As of December 2013, service charge arrears from the owners of commercial buildings and housing projects amounted to RM25.37mil.

Technician S. Vikneswaran, 38, who also lives in Taman Pelangi, said only one lift was functioning while the guardhouse had been left vacant for sometime now.

“Why do we need to pay them for such a lousy service? Everyone is talking about value for money.

“But look at the service they give us,” he said.

Babysitter Lee Phaik Chin, 62, who has an outstanding maintenance payment of more than RM2,000, said she was shocked to learn about the compounded interest of close to RM1,000.

She said she had wanted to settle the due amount by instalment but the PDC management did not allow her to do so.

Lee said the unpaid fee snowballed when her husband, who had since passed away, suffered a stroke several years ago.

“With my financial situation getting better nowadays, I want to settle the due but was shocked by the compounded interest over the years.

“But I was told to settle the outstanding payment at one go. Only the interest can be paid by instalment.

“A few thousand ringgit is considered a huge amount of money for us, since most of us staying here are from the low and middle-income group,” she said.

Another resident, who requested anonymity, said it was always a chicken and egg situation for both PDC and the residents.

“PDC would always say they need to recoup the default payment before being able to carry out proper maintenance.

“The residents, though, would only pay if the maintenance within the vicinity is satisfactory.

“Now, someone has to give in before a win-win situation can be reached,” he said.

The resident also said many residents were upset to receive legal notice from PDC, urging them to pay up outstanding payment with compounded interest.

“Many of them have not been paying for years. So the accumulation of unpaid amount coupled with interest has reached almost RM10,000.

“My question here is, why didn’t they take action against defaulters within three or six months, but wait until now?

“Do you think the residents here can afford that amount?” he asked.