Do you love me?: Leehom interacting with the crowdduring the concert.

HEARTTHROB Wang Leehom had his fans screaming for more after performing for a solid hour during the EcoWorld Starlight 2015 New Year Concert.

The American singer-songwriter based in Taiwan enthralled the audience of nearly 10,000 invited guests with his hits including, Wei Yi (The One and Only).

He then took to the grand piano and surprised the crowd with his rendition of P. Ramlee’s classic hit, Getaran Jiwa which he rendered almost perfectly despite the lyrics being alien to him.

Prior to Leehom’s performance, local artistes Melody Tan and Najwa Latif serenaded the crowd with their strong vocals.

Tan, 22, was a Voice of China finalist last year while YouTube star Najwa, 20, rose to stardom with her 2011 single Cinta Muka Buku (Facebook Love) which has since received more than 8 million views. 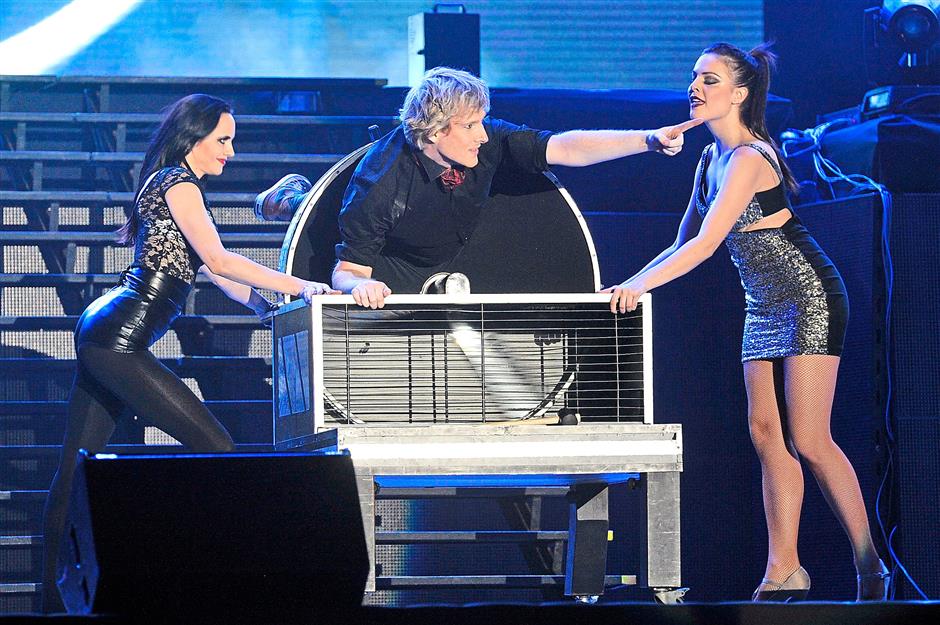 Highly dangerous: Craven crawling through spinning steel blades in a death- defying stunt during the show.

Renowned illusionist and magician Daniel Craven kicked off the concert with his death-defying acts such as crawling through spinning metal blades and unleashing large metal spikes on his assistant who was trapped in a box.

“We are delighted to be in Penang and happy to see such a strong turnout for the first EcoWorld Starlight 2015 New Year Concert.

“We are looking forward to making our presence felt in the state with the launch of our first development here very soon,” he said.

Chang added that the project called, EcoTerraces, located in Jalan Paya Terubong on a freehold 5.18ha tract, would have 333 luxurious condominium units of 1,000sq ft to 1,900sq ft in size at RM800 psf.

Only 30% of the land will be used for development while the rest will be dedicated to natural elements. Joining in the fun: (From third left) Rajoo, Chew and (from sixth left) Kee Sin, Tian Xiong, Chun Wai and Florence grooving to a number during the concert.

The concert, at the Subterranean Penang International Convention and Exhibition Centre in Relau, is the first of three concerts lined up.