The StarMetro team tries out glamping at the Putrajaya Wetlands Park

The ‘settlement’: A symphony of snores filled the glam site as dawn broke.

IT WAS a challenging year for StarMetro, covering hot topics such as the much debated Petaling Jaya one-way loop issue and the tension-fuelled story behind the saving of the Vivekananda Ashram.

After a hard year’s work, the department headed out for a weekend retreat to regroup, unwind and reacquaint themselves with nature and one another in their ninth team building session.

Glamping, or glamorous camping, is a form of camping involving accommodation and facilities more luxurious than those associated with traditional camping and it is relatively new in Malaysia. Home sweet home: Participants Kelly Tey (left) and Yip Yoke Teng in their tent which was equipped with two air mattresses and a portable light and fan.

“Glamping is an alternative which provides comfortable furnishing set up in a well-maintained environment with amenities, while inculcating the importance of group activities in building relationships.

“If companies have their teambuilding at hotels, you are most likely to see employees holed up in their rooms with their gadgets instead of participating in activities together,” he said.

He added that by July, they would have five locations — Langkawi, Sabah, Janda Baik, Raub and Putrajaya, which will be a temporary set up.

After a successful launch by Universal Fitness and Leisure Sdn Bhd in June, StarMetro executive editor Brian Martin decided to take his team of journalists, editors and sub-editors to the wild in a Coleman tent at Putrajaya Wetlands recently.

Martin said he hopes that the team would use the team bonding experience for the rest of the year in the office. Circle of light: A bonfire burning all night long at the campsite.

“I believe that a lot of urbanites have not experienced life in the outdoors but are caught up in the hustle and bustle of city life.

“So, this is something new that we have not experienced,” he said.

Christina Low, who has been with StarMetro for close to nine years, said that the teambuilding experiences were never the same.

“Every year, we do different activities and also live in different settings.

“There were some years where we stayed in hotels, some in chalets, but never camping,” she said.

Our journey began after work, where about 40 employees hopped on a bus and made their way to our destination.

What would have been a 45-minute journey took us more than one hour, thanks to the Friday traffic.

Upon reaching our destination, we were greeted by event organisers Cyclic Sports, who assigned us to our already pitched tents, and catered dinner by Big Onion Caterer.

Though fresh off an hour-long bus ride, a group of 20 decided to go on a 4km night trail through the dark, dense greenery where they spotted a flock of pink-winged flamingos.

Campers were woken up by either the sounds of their tent mate’s snores or Coldplay’s Yellow blaring through the large speakers at the campsite. Pink is in: The park is also home to a flock of Greater flamingos.

After cold morning showers and a good breakfast, it was game time as we were split into groups to take on a series of challenges. It tested our memory and teamwork in the midst of juggling tasks like solving various puzzles.

Recalling past team building sessions, Priya Menon said that many were held either in Genting or Port Dickson, “Last year, we ventured off the beaten track and spent the weekend away from the city.”

Among the memorable activities, she said, was a task to build a raft using recycled materials.

“It was fun. I was with a team of people who were very much into outdoor activities so I was confident our raft would be strong,” she recalled.

“To our surprise, we were told to swap rafts once we were done building, row it a distance from the seashore and row back,” she said.

She laughed explaining how her team had to paddle as quickly as possible as their raft began coming apart midway back to shore.

Away we go: The StarMetro team on a tour of Putrajaya Wetlands on a tram.

She had a good time participating in an endurance challenge in Genting and fighting the strong rapids during white water rafting in Gopeng, Perak, last year.

The team went on a tram tour around the Wetlands where we were introduced to the flora and fauna found in the area.

It was scorching hot when we moved on to the next activity — a twisted Masterchef Challenge which required us to beg and barter with other teams for essential ingredients such as chicken to make chicken chop.

It was a tough challenge to complete with the limited supplies and tools given, especially for the team which had to cook rice in a wok.

After a jam-packed day, we were all still excited to try our hands at archery. 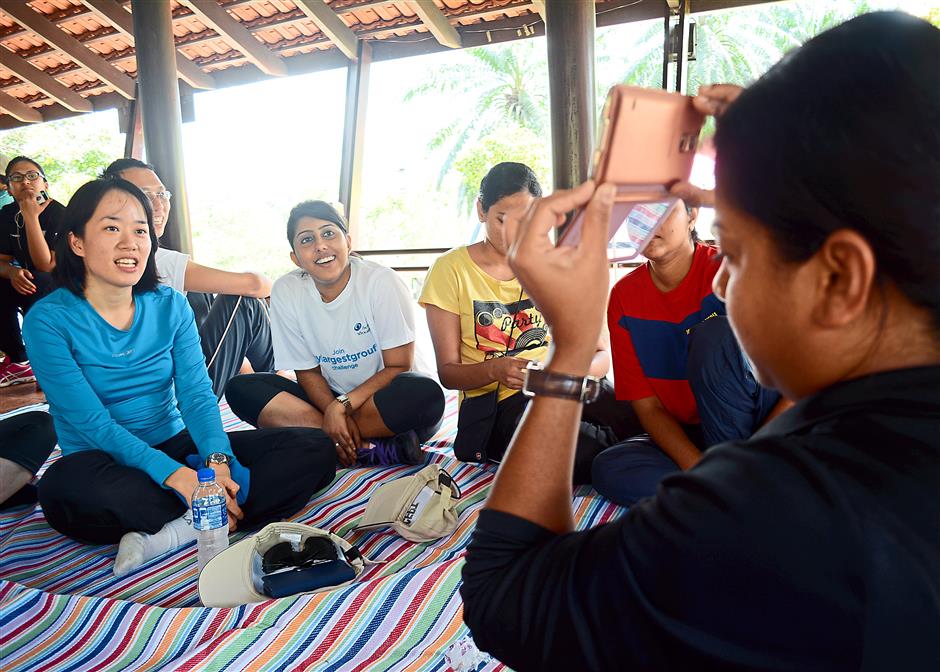 Guess the answer: Apart from the scheduled activities, the StarMetro team had their own fun playing charades during break time.

Let’s just say not everyone hit the mark, unless the mark was the ground and trees around the target.

The highlight of the day was a barbecue set up by Coleman using their grills, as we sat under the stars waiting for our food without lifting a finger.

We did not let the night go to waste either as glampers huddled together on their lazy chairs to watch a moonlight movie while others played card games.

Morning came too quickly and before we knew it, it was time to leave the unconventional camp and head back to work.

It was a unique experience and one that we will laugh about till our next adventure together.